HEY GUYS, I AM EXCITED TO BRING YOU MY PROMO POST OF THE CELLAR HAND; A WORKPLACE ENCOUNTERS STORY; BY SERENA YATES! I LOVE THIS SERIES, AS YOU KNOW, SO I CAN'T WAIT TO BRING YOU MY RELEASE DAY REVIEW ON THE 18TH! BELOW IS THE BLURB, COVER, PRE-ORDER LINK, AND AN EXCERPT, SO LET'S GET GOIN!


2nd Edition
A Workplace Encounters Book
Orson Digby is no stranger to loss. His family died in a house fire when he was fifteen, and he has never recovered from losing touch with his best friend when he was made to stay with an aunt in a different state. Orson works hard to learn the art of winemaking and finally starts a job as cellar hand at Clear Springs Vineyard—only to run into his long-lost best friend.
Geoff Robichaud, freshly out of the Marines, is in charge of security at the winery. The friendship between Orson and Geoff is familiar, but the intense physical attraction is new. As they explore their developing feelings, several acts of sabotage threaten to destroy their new employer's business and their newfound happiness. They need to rely on Orson’s knowledge of viniculture and Geoff’s understanding of security if they want to solve the mystery and build a future together.
OH YEAH, SOUNDS AWESOME HUH? YOU KNOW IT IS! HERE IS THE BEAUTIFUL COVER: 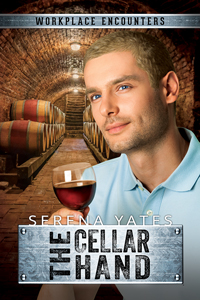 I JUST LOVE ORSON AND YOU WILL TOO! THANKS FOR JOINING ME FOR MY PROMO POST OF: THE CELLAR HAND, GET YOUR COPY TODAY! SEE YOU GUYS NEXT TIME!