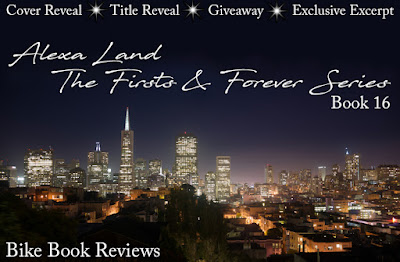 HELLO FRIENDS, THE TIME HAS COME TO BRING YOU THE COVER AND TITLE REVEAL FOR BOOK 16 IN ALEXA LAND'S AMAZING FIRSTS & FOREVER SERIES! I WANT TO THANK ALEXA FOR LETTING ME BE A PART OF THIS, I CAN'T WAIT FOR YOU GUYS TO SEE THE COVER, BELOW IS THAT AND MUCH MORE! LET'S START WITH A WORD FROM ALEXA:


A Message from Alexa Land:

Hi everyone! Thanks for joining me for the cover and title reveal for book 16 in the Firsts and Forever Series! This is Mike Dombruso’s long-anticipated story. As you may recall, he’s the youngest of the four Dombruso brothers, and he’s also a widower with three kids. His love interest is Yoshi Miyazaki, and I know many of you have been looking forward to Yoshi’s happily ever after as well. Both men have been a part of the series for years. Mike dates back all the way to book 2 in the series, All In. Their upcoming book is both a friends to lovers and opposites attract love story, and I can’t wait to get it in your hands! The anticipated release date is May 28th.

When it was time to pick a title, I decided to put out a call to the members of my Firsts and Forever group on Facebook, and I got so many fantastic responses! Thank you to everyone who participated and made this a very tough choice. The title I finally decided on was The Rest of Forever, submitted by Terri Hawk. I thought it was beautiful and romantic, and perfect for this couple. Yoshi wasn’t Mike’s first love, but if they can overcome a few obstacles in their path, they have the rest of forever to spend with each other. Thank you Terri! Be sure to check out the dedication page when the book goes live.

As a thank you for stopping by today, I’m gifting a $20 Amazon gift card to one lucky winner, drawn at random from those leaving comments on this post (if you have any problems posting, just let me know and I’ll post for you). The giveaway is open to readers 18+ worldwide (giveaway not affiliated with Facebook or Amazon) and will run until noon PST May 5, 2018.
Following is a first look at a scene from the upcoming book. This is told from Mike’s perspective, and it takes place right after they finally cross the line from friends to lovers. I hope you enjoy it!

Exclusive Excerpt: The Rest of Forever:

The day was bright and sunny, the sky impossibly blue. Several people were in the courtyard, just a few yards away. Their voices carried over to us. It felt like an intrusion, all of it.
I tried to shut out the light and sound and motion, the rest of the world, just for one more minute. I focused on Yoshi, concentrating on him intently. There was so much longing in his eyes as he looked into mine. He probably saw the same thing reflected back at him.
Everything had changed. I’d changed. My whole world had realigned in that quiet refuge. The unspoken thing between Yoshi and me, the thing that had been there, waiting, such a long time, had been transformed from fantasy to reality. We went in there as two individuals, as friends on the cusp of becoming so much more. We left as a couple, all that potential fully and finally realized.
I almost didn’t know what to do now. I didn’t know how to go back to the same world when I’d been completely remade. We’d been remade, he and I.
I wanted to tell him all of that, but I didn’t know how. Somehow though, it seemed like he understood. Yoshi took my hand, and when he smiled at me, I felt this crazy surge of optimism.
Then we went to rejoin our family and friends, together.

WOO HOO, AMAZING RIGHT? I BET YOU WANNA SEE THE COVER HUH? HERE IT IS FRIENDS: FOLLOWED BY THE BLURB! 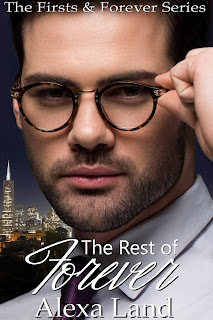 Mike Dombruso’s life is anything but glamorous. He’s a shy, nerdy accountant and a widower with three young sons, whose world revolves around his kids.

In many ways, Yoshiro Miyazaki is Mike’s polar opposite. Yoshi’s a confident, sophisticated tattoo artist who seems to have it all, from his successful business to his stylish loft apartment and rock star boyfriend.

Their unlikely friendship has spanned more than a decade, and Mike is surprised when he realizes he’s fallen for the best friend he’s ever had. After Yoshi breaks up with his boyfriend, Mike sees a window of opportunity. But he has some decisions to make.

Should he risk their friendship for a shot at something more, and is he really ready to explore his bisexuality for the first time? Most of all, can the young widower let go of the past and take a chance on love again?

And even if Mike decides to give it a try, will Yoshi really be willing to trade life in the fast lane for kids and carpools?

OMG RIGHT? ALEXA NEVER FAILS TO WOW ME WITH HER COVERS, NOT TO MENTION HER BOOKS IN GENERAL! BELOW IS A BIO AND SOCIAL LINKS FOR ALEXA, BE SURE TO CHECK IT OUT!

Alexa Land Bio
I'm a true believer in happily ever after, and writing is my passion. My character-driven books include the best-selling Firsts and Forever Series, which is set in San Francisco. I grew up in Southern California, spent over a decade in the Bay Area, and now call a small town in Oregon home. My son and I share a vintage cottage with an indifferent cat and a hyper dog, and I spend my days writing about men falling in love. My books will make you laugh and shed an occasional tear, and they always deliver a satisfying HEA.

You can find Alexa:

And on her blog: http://alexalandwrites.blogspot.com/

THANKS SO MUCH FOR JOINING US TODAY, AND DON'T FORGET TO LEAVE A COMMENT BELOW TO ENTER TO WIN THE GIVEAWAY! THANKS AGAIN ALEXA, FOR THE CHANCE TO REVEAL THE COVER, IT WAS BEAUTIFUL AS ALWAYS!