HELLO FRIENDS, BELOW IS MY PROMO POST AND RE-RELEASE DAY REVIEW FOR HEMOVORE, BY JORDAN CASTILLO PRICE! LOOK BELOW FOR MY REVIEW AND MUCH MORE INCLUDING AN EXCERPT! 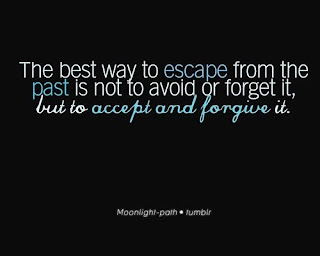 Mark Hansen thought working as artist’s assistant would be glamorous, especially if that artist was a vampire. Black tie events, witty repartee, gracing the pages of the local style section…. Didn’t happen. Not even once.
Jonathan Varga is an enigma. True, he’s quiet, generous, and scrupulously polite. But he has zero social life, refuses to be interviewed or photographed, and insists he can only consume feline blood.
Why supermarket blood won't suffice, Mark hasn’t asked. He’s rarely at a loss for words—he can dish an insult and follow it with a snap as quick as you can say “Miss Thang.” But one look at Jonathan’s black-as-sin gypsy eyes, and Mark’s objections drain away.
So he endures the perpetual grind of their routine: Jonathan hiding in his studio, swiping black paint onto black canvases. Mark hurling insults while he buffs the office to a shine with antiviral wipes. Each of them avoiding the other in a careful choreography…until a blurb in Art in America unleashes a chain of harrowing events.
As secrets from Jonathan’s past are brought to light, it becomes clear that all his precautions weren’t nearly enough.
(First edition originally published in 2009. Second expanded edition includes the bonus novelette, Sweet.) 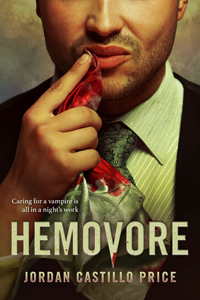 I adore Mark, he had me at Hoagie Flavored Meatball Water (trust me you'll get it :P)!! He is snarky and sharp, and everything you would expect a Jordan Castillo Price character to be! I love this author and her ability to craft amazing characters as well as stories!

Mark works for artist Jonathan, and his life is far from normal let me tell you! Mark keeps Jonathan's life in order, but it isn't the fun filled time that Mark thought he would have as a Vampire's assistant. What is Jonathan hiding from? Can Mark handle it when he finds out?

Boy is this book amazing, and it would be a shame to spoil it for you, so you are just gonna have to grab it and read it for yourselves, trust me you will love it as much as I did! Thanks Jordan, for another amazing read! 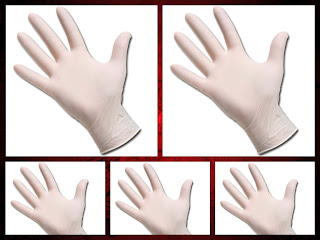 I JUST HAD TO DO THE GLOVE RATING BECAUSE OF...REASONS :p GRAB THE BOOK FROM THE LINKS ABOVE AND FIND OUT WHY! NOW FOR AN EXCERPT:


The blood is the life.
So Hollywood’s been telling us, and maybe it’s true, but water is where the real money’s being made. Water should be free—it falls from the sky, after all—but there it was on the shelf in slick, designer-looking bottles, selling for four, five bucks apiece. Water. It had become the fastest-growing, highest-grossing product on the market.

I felt vaguely guilty as I steered my shopping cart full of Lean Cuisines down the water aisle, but only vaguely. Jonathan had never forbidden me to shop in the water aisle—only the vampire aisle. Though you could argue that they were practically one and the same, especially since water now came in such flavors as Dew Kissed Pear Orchard and…Meatball Hoagie.

I did a double take. Yes indeed, I’d read the label correctly. Meatball Hoagie De-Lite. I rotated a bottle so I could read the label. The first ingredient was water. That was encouraging. A bunch of scientific-sounding words followed. Additives? Preservatives? Hard to say. All I knew for sure was that the bottle of flavored water I was scrutinizing had more chemicals in it than my Aunt Trixie at the last ill-fated Hansen family Thanksgiving gathering.

The shelf had a bright orange tag dangling from the edge. Meatball Hoagie De-Lite was on sale, three for $11—which was irritating, since eleven isn’t readily divisible by three, and which, I suspected, was the very reason it had been priced that way. It couldn’t hurt to try it, since it was on sale and all, but I wasn’t about to put it on Jonathan’s credit card with the rest of our food. Maybe he looked at the receipts, or maybe he shoved them all into a shoebox for his accountant to handle, but either way, I didn’t want to be stuck explaining my sudden perverse desire to taste sandwich-flavored water.
Maybe I had some cash.

I slipped off my store glove to avoid contaminating my pocket and felt around for my money clip. Empty. But wait, there was a papery sort of rustling behind the foil-wrapped antiviral wipe. I plucked the paper out triumphantly, fully expecting it to be a five…and found a McDonald’s receipt instead. For the record, I never eat at McDonald’s. Not unless I’m fainting from low blood sugar, or I’m stuck at the apex of a particularly long and circuitous route.

I gazed fondly at the receipt. The Big Mac had been divine. And the fries were golden perfection. I hadn’t been imagining money where it didn’t exist—there really had been a five. However, that particular bit of currency now resided in the antimicrobial cash register beneath the Golden Arches.

Vampire water never tasted as good as I imagined it would, anyway. There was no heft to it. No calories. No fat. And the flavors either faded so fast that I couldn’t be sure I’d even tasted them, or they lingered on as strange and intrusive aftertastes. It was just as well that I had no cash to waste on an outrageously priced bottle of water, especially since I still hadn’t managed to calculate its exact cost.

I’d turned away from the display and was fully prepared to wheel my shopping cart away, and as I tried to stuff my hand back into my store glove, a thought occurred to me. Did the water taste like bread? It would have to, wouldn’t it? Otherwise it would be bouillon. Clear, chemically replicated bouillon without any actual meat stock, but bouillon, nonetheless. What made this particular flavor of water taste like a hoagie?

It was while I was in this vulnerable state of confusion that the goth girl accosted me.
“Hiya!” She was up close and personal—and her hand slid into my poor, vulnerable bare hand before I even knew what hit me.

Safe sex. As if. No sex with a vampire was safe sex. You couldn’t even dry-kiss without someday finding yourself on the long road to a permanent liquid diet…if you even survived all three hideous stages of the disease, which a majority of the people who contracted it did not.

YOU GOTTA READ THIS BOOK NOW RIGHT? YOU WILL LOVE IT!!! HERE IS A BIO AND SOCIAL LINKS FOR JORDAN AS WELL AS HER BOOKS, WHICH ARE AMAZING: 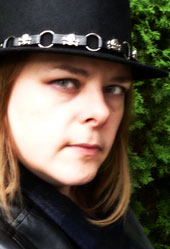 Author and artist Jordan Castillo Price writes paranormal sci-fi thrillers colored by her time in the midwest, from inner city Chicago, to rural small town Wisconsin, to liberal Madison. Her influences include Ouija boards, Return of the Living Dead, "light as a feather, stiff as a board," girls with tattoos and boys in eyeliner.
Jordan is best known as the author of the PsyCop series, an unfolding tale of paranormal mystery and suspense starring Victor Bayne, a gay medium who's plagued by ghostly visitations. Also check out her mind-bending trilogy Mnevermind, where memories are made...one client at a time.


Mnevermind
Making memories, one client at a time.

- Kindle Edition
The Serpent in the Garden

THERE YOU HAVE IT FRIENDS: CHECK OUT THESE LINKS! SEE YOU GUYS NEXT TIME! 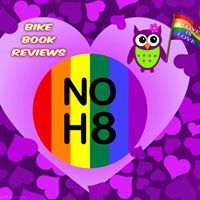 at January 31, 2017
Email ThisBlogThis!Share to TwitterShare to FacebookShare to Pinterest