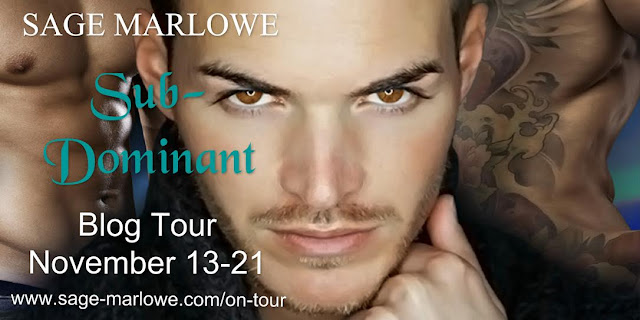 HELLO FRIENDS, ANYONE WHO KNOWS ME KNOWS I AM DOING CARTWHEELS (WELL IF I COULD :p) OVER IT FINALLY BEING RELEASE DAY OF SUB-DOMINANT; SUB-SERIES 4; BY SAGE MARLOWE! BELOW IS MY REVIEW, LINKS, AN EXCERPT, A GIVEAWAY,  AND AN AUTHOR BIO AND SOCIAL LINKS, LET'S GET STARTED: 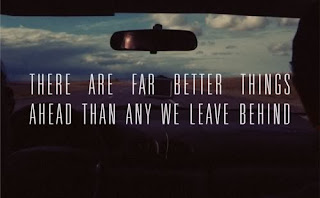 OH HOW PERFECT THIS QUOTE IS FOR THIS BOOK, YOU WILL SEE WHY ;) HERE IS MY REVIEW:


Putting a leash on a dominant sub is a task that may require two Doms to accomplish. When relocation agent Eric Swann is assigned to ease young Connor Prescott into moving back to London, he expects the boy to be more enthusiastic—and less irritating. Used to roaming freely among his mother’s D-list celebrity friends, Connor is anything but happy when his father decides to put him on a leash—a leash with a far too attractive handler on the other end. Secretly craving a man who knows how to yank his chain and show him exactly where the limits are, Connor does what he’s best at. He manipulates Eric into giving him what he wants, making the man reveal a side of him that Eric himself isn’t ready to accept. Trained by one of the quirkiest Dom/sub-teams in the country, Dom Tyler Kane knows exactly how to handle a toppy sub. He keeps Connor on his toes, er, knees, in the bedroom, but when his capricious lover sets his heart on pushing yet another limit, Tyler finds himself not only with a dominant sub but also with a Dom who has yet to accept his true identity. 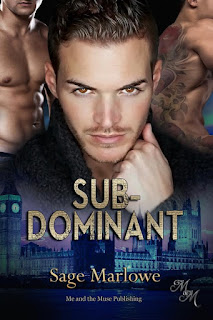 It takes a special author to not just write a story, but to craft it, weaving the story around amazing characters that just explode off the page, and Sage Marlowe is one of these authors! You will fall into Sub-Dominate and live the story with these extraordinary characters!

Connor is not happy that his father is putting a tether on him, he is being ripped from his boyfriend and everything he is used too, but is it for his own good in the end?

Eric is in charge of Connor, he is there to help him adjust to a completely different way of life. Eric finds Connor very attractive, a fact that could cause complications, more than once :P.  Eric learns of Connor's past and the fact that he could have been manipulated by the boyfriend who professed to care for him, and after a misunderstanding Connor takes off.

Five years pass and when Eric runs into Connor again, these two have so much chemistry, but Eric doesn't see himself as a dom, and Connor needs to be dominated, this is where Tyler comes in!

I love Tyler, and he proves that he is just what is needed to complete Eric and Connor! This coupling won't be without it's bumps in the road, but they will all be worth it in the end!

Grab this one guys, in addition to being a wonderful book, it is a HOT one! The sex is off the charts, and you will love it as much as I do! Thanks Sage, for another winner in your long line of fabulous books! 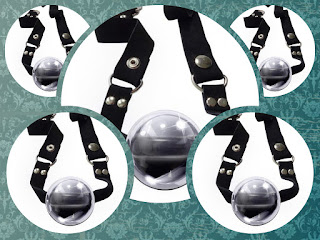 YOU WILL SEE WHY I DID THE BALL GAG, AND WHOA BOY HAVE A FAN HANDY WHEN YOU READ THIS BOOK! HERE ARE THE LINKS: GRAB YOUR COPY TODAY:

** Quick note: if the US link isn't live yet, it will be soon, so order now and you will have your book in no time**

GRAB IT NOW IF YOU DIDN'T PRE-ORDER, YOU WILL LOVE IT! HERE IS AN EXCERPT, FOLLOWED BY AN AUTHOR BIO AND LINKS: ENJOY:

Connor smiled at him and nodded. The dreamy expression made his eyes gleam seductively and Eric forced himself to focus on the conversation.
“My experience with guys was good. Sure, it was awkward at first, but I’ve always felt good with a man.”
Eric raised his eyebrows. “Always? You’re eighteen, for crying out loud. How many men have you been with?”
Connor made a face and avoided Eric’s gaze. “A few. How many have you been with?”
“This isn’t about me.”
“Why not? Why don’t I get to ask questions?”
Eric sighed. “Okay, fine. I’m twenty-six, and I’ve probably been with...a few more men than you have.” He waggled his eyebrows when Connor looked at him.
The young man laughed. “You big chicken!”
“I’m not a big chicken, but I do have a big—” Eric bit his tongue. Shit. That wasn’t the kind of comment he should be making in his young charge’s presence.
Connor didn’t seem fazed. “I noticed. Are you a shower or a grower?”
“Um... A bit of both. It grows some more but—Seriously, Connor, this is TMI. We shouldn’t be talking about these things.”
“Why? What’s wrong with two guys comparing the size of their dicks?”
“We’re not comparing the size of our dicks!”
Connor smirked. “Aren’t we? I know where you’ll be looking when I get up to use the restroom.”
“Connor! For fuck’s sake, sit down!”
A sweet, sinful smile on his face, Connor stood up, making sure to linger with his groin at Eric’s eye level before he turned around with an unnecessary amount of butt-wiggling, then he stalked off. The boy was either at least half erect or blessed.
When he returned, Connor’s smile was still in place and even naughtier than before. Head held high and back straight, he turned the narrow aisle to their table into some sort of fashion runway. Stopping right in front of Eric, he tilted his hip to give him an eyeful of his bulging groin before he sat down.
“Can you guess?”
Eric gritted his teeth. “Guess what?”
“Whether I’m a shower or a grower.”
“I can’t guess. I haven’t even thought about it.”
“Liar.” Connor pouted, but amusement danced in his voice. “You’ve been thinking about it ever since I mentioned it, and you thought about it before. Did you imagine me naked?”
“Connor! Shut up now, will you? We’re not alone here.”
Connor tilted his head and looked up from underneath those ridiculous charcoal lashes. “Do you want to go back to my room? We’ll be all alone there.” Green sparks glittered in the dim light, teasing him, challenging him. Eric had known it was coming and had tried to be ready when it did, but Connor still took him by surprise with this alcohol-fuelled come-on.
“I don’t think that’s such a good idea.” Eric forced the words out, watching Connor’s full, slightly parted lips. He’d been thinking about kissing those lips more than once during the last weeks and even more often on that evening. The thought of feeling them on other parts of his anatomy had his blood racing to those parts.
“I know you want to,” Connor breathed and leaned across the table, stopping only inches from Eric’s face, almost close enough for a kiss.
“Connor, really, I—”
“I’ll let you put it anywhere you want.”
“I’m not putting anything anywhere except you to bed. Alone. We’re leaving. Now.” He signalled for the bill, secretly grateful for the delay as his body and mind needed a few minutes to calm down. Connor sat with his arms folded across his chest, pouting.
When Eric had paid, he got up and glared down at Connor. “We’re going back to the hotel now. No acting up, no discussion. If you pull any of your usual stroppy shit on me, I’m going to drag you along by the scruff of the neck. Got that?” He marched off towards the door without even checking if Connor was following him. Outside, he waited just long enough for Connor to catch up with him, then he led the way down the road.
“Fuck, Eric,” Connor panted. “Slow down a bit, will you? I was joking, okay? Don’t be mad at me.”
“I’m not mad at you but I am taking you back to your hotel now.”
“Don’t you wanna get a cab?”
Eric scoffed. “The hotel is just around the corner. The walk will do you good.”
Connor grumbled, but followed him without any more fuss. He kept quiet until they were inside the building and waiting for the elevator to arrive. “What are you afraid of, big boy?” he whispered suddenly.

:D YOU GOTTA HAVE THIS BOOK RIGHT? I KNOW YOU DO, HERE IS THE AUTHOR BIO:

About the author & Social Media Links:

A willing slave to all the fascinating guys who keep queuing up and want their stories told, Sage can almost always be found cooking up the next hot story or daydreaming about new ways of rubbing sexy male bodies together to make the sparks fly.

CHECK OUT THOSE LINKS, AND IF YOU HAVEN'T READ THE FIRST THREE IN THE SERIES, USE THE AMAZON AUTHOR PAGE LINK AND GRAB THEM NOW!! HERE IS THE INFO ON THE GIVEAWAY:
To enter, simply leave a comment on any or all blog posts of the Sub-Dominant Tour. Each comment qualifies as an extra entry and will increase chances to win.
Contest is open until November 23, midnight CEST. Winners will be picked at random and announced on my website / Facebook / Twitter on November 24.
Winners have one week to claim their prizes or a new winner will be selected at random. No purchase necessary. Open internationally, void where prohibited. Contestants must be 18 years Prize is as stated. No substitution or exchange.

BELOW IS THE LINK TO SAGE'S WEBSITE WITH THE FULL BLOG SCHEDULE, DON'T MISS A STOP AND A CHANCE TO COMMENT TO WIN THESE AWESOME PRIZES!

THANKS FOR JOINING ME FOR MY RELEASE DAY  REVIEW AND BLOG TOUR STOP OF SUB-DOMINANT, GRAB YOUR COPY TODAY, AND DON'T FORGET TO COMMENT BELOW TO ENTER THE GIVEAWAY!

at November 13, 2015
Email ThisBlogThis!Share to TwitterShare to FacebookShare to Pinterest