EVERYONE WHO KNOWS ME KNOWS THAT ONE OF THE FIRST MM AUTHORS WHOSE WRITING I FELL IN LOVE WITH WAS ELI EASTON! I AM VERY HAPPY TO BRING YOU MY BLOG TOUR STOP OF HER NEWEST BOOK:  A SECOND HARVEST, MEN OF LANCASTER COUNTY 1! I AM IN THE MIDDLE OF THIS BOOK AND LET ME TELL YOU IT IS AMAZING! LOOK BELOW FOR BOOK INFO, LINKS, AN EXCERPT, AUTHOR BIO AND EVEN A GIVEAWAY! ENJOY GUYS AND GRAB THIS BOOK! LOOK FOR MY REVIEW VERY SOON! 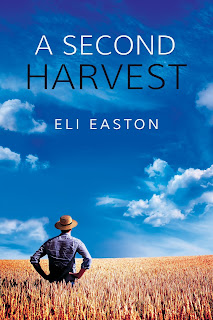 David Fisher has lived by the rules all his life. Born to a Mennonite family, he obeyed his father and took over the family farm, married, and had two children. Now with both his kids in college and his wife deceased, he runs his farm alone and without joy, counting off the days of a life half-lived.

Christie Landon, graphic designer, Manhattanite, and fierce gay party boy, needs a change. Now thirty, he figures it’s time to grow up and think about his future. When his best friend overdoses, Christie resolves to take a break from the city. He heads to a small house in Lancaster County, Pennsylvania, to rest, recoup, and reflect.

But life in the country is boring despite glimpses of the hunky silver fox next door. When Christie’s creativity latches on to cooking, he decides to approach his widower neighbor with a plan to share meals and grocery expenses. David agrees, and soon the odd couple finds they really enjoy spending time together.

Christie challenges the boundaries of David’s closed world and brings out feelings he buried long ago. If he can break free of the past, he might find a second chance at happiness.

It was Saturday and the idea of doing more cleaning held little appeal. What else did he have to do with himself? Nothing. The temptation to go into Lancaster or Harrisburg was there, to seek out a gay bar, or even get on Grindr. Gay men had to exist out here. But… that wasn’t why he moved here. He came here to get away from all that for a little while.
His mind made up, he went to the grocery store in town with a long list. It was a big-chain grocery store, and he was pleased to find nearly everything he needed. The October day was bright with crisp leaves and a blue sky. When he got back home with his sacks of goodies, it was still early afternoon. He opened the windows in the kitchen—struggling against the one over the sink that stuck—turned up the music on his iPhone, and started dancing around, organizing his supplies and digging out pots and pans.
He made the curried carrot ginger soup, a lovely dish with fresh peas, green onion, and radishes, some savory cheese-and-herb swirled biscuits, and a basic herb-roasted chicken. He truly did love to cook, though the past few years, it never seemed worth the effort. There were so many great takeout places in the East Village. Plus Kyle was such a picky eater. He basically ate pizza and stripped-down salads, and that was it.
It occurred to Christie while he was prepping this meal that it was going to be a beautiful repast, and it was a shame he didn’t have anyone to share it with. He could freeze some of it, but it wouldn’t be the same. He thought of David next door, living alone, and of his TV dinner. Would that be weird? That would be weird, right?
Pushing it from his mind, Christie spent the rest of the afternoon jamming to tunes in the kitchen and working his way through the recipes, having fun and dancing in his stocking feet.
When everything was ready, Christie decided the meal deserved some pomp and circumstance. His aunt had a drawer of tablecloths, but they were not quite his style. He used a white linen towel for a place mat and put each dish on the table in the best china dishes he could find. He used a red cut glass for his water and lit a candle in an old silver candlestick he found in the cupboard.
He looked at the table and chewed his lip. Everything looked beautiful. It smelled amazing too. He sucked some chicken juice from his thumb—yum. It almost seemed like a waste to eat it. He wished someone were here to share the meal with him. Anyone, really. The idea he’d avoided thinking about while cooking poked its head out again.
Well. He’d never been exactly shy. If he was going to do this, he had to do it quickly. The food was getting cold.
With a nervous shake of his head, Christie decided. He cut the roast chicken in half and put it on a large plate with a little bit of everything else, covered it with aluminum foil, and ran out the back door.


He hadn’t been to the Fisher’s farm before, and it turned out to be a longer trip down the gravel lane than he anticipated, maybe a quarter mile. He kept up a jog, worried about the food getting ruined. Between that and his nerves, he had a fine sheen of sweat when he got there. 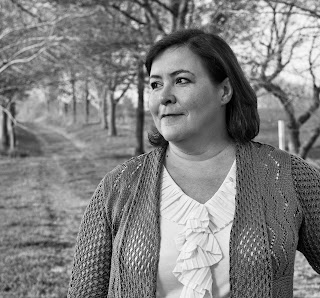 You can find Eli at

at July 03, 2016
Email ThisBlogThis!Share to TwitterShare to FacebookShare to Pinterest