HEY FRIENDS, I AM HERE WITH MY BLOG TOUR STOP OF A CHARMING BOOK, BEWARE OF GEEKS BEARING GIFTS BY CHARLIE COCHET! I HAVE BOOK INFO, MY REVIEW, AN EXCERPT, AUTHOR BIO AND LINKS, AND EVEN A RAFFLECOPTER GIVEAWAY, AND MORE SO LET'S GET STARTED: 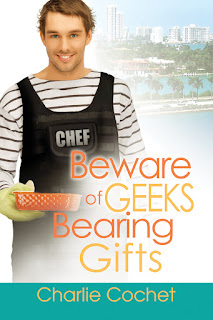 Blurb: Julian “Quinn” Quinetro, a gruff, tough
Miami SWAT officer, has been injured on the job, and all he’s looking for is a
little peace and quiet to recover—difficult to achieve with his large Cuban
family. An adventure in picking up his prescriptions puts him in the path of
his geeky, brownie-baking neighbor, Spencer Morgan. Spencer sweeps into Quinn’s
life like a tropical storm of sunshine and rainbows. Not surprisingly, it’s chaos
at first sight. Quinn’s in need of a little tender loving care, and Spencer
decides he’s just the man for the job. Their very different lives might clash,
but they might also find some common ground—and maybe more. 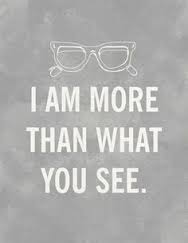 THIS QUOTE IS PERFECT FOR SWEET SPENCER! HERE IS MY REVIEW:

I loved this book, and I just want to give sweet, geeky Spencer a great big hug!! Bless his heart he is the sweetest guy, but he just has the worst luck, and seems to embarrass himself at every turn, especially where his sexy neighbor is concerned!

Quinn has been hurt on the job and is laid up at home, a fact that puts his large family in "nurse" mode, which is driving Quinn crazy, when he encounters his neighbor Spencer, who he has seen but only in passing, he is thrown for a loop, and when Spencer inserts himself into Quinn's wellness plan, watch out world!

This is a delightful read that will have you giggling from the get go, and features secondary characters that you will be delighted with also! I love this author and she didn't let me down with this book for sure! Thanks Charlie, for a read that is both delightful and sweet! 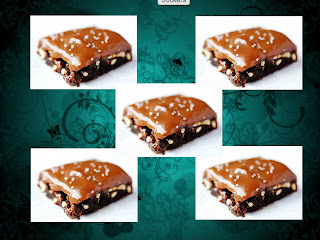 I DID THE BROWNIE RATING IN HONOR OF SPENCER AND HIS YUMMY BAKED TREATS!!! HERE ARE THE EXCERPT AND BUY LINKS FOR YOU:

“This is sad, man. What is it with you
and brownies?”

“These aren’t just any brownies,”
Spencer stated proudly as he removed his latest batch of baked chocolate
decadence from the oven. “These are Nutella caramel brownies with nuts, made
from scratch. These are orgasm-in-your-mouth brownies.”

“Not really sure what to think about
that,” Danny muttered, eyeing the brownies dubiously. “Seriously, dude. The
only orgasm you should be chasing is the one waiting next door. This is your
perfect chance! He’s defenseless.” Danny reached for a brownie, but Spencer
slapped his hand away before he could pilfer one.

“I have to spread the Nutella and top
them with walnuts. Also, I don’t know what I find more disturbing: that you
think I should take advantage of the poor guy in his defenseless state, or that
you believe the only way I’ve got a shot is to take advantage of him in his
defenseless state.” He stopped and turned to his pouting best friend. “And FYI,
defenseless is what babies and puppies are, not huge-ass mountain men in
possession of heavy artillery. I ran into him once, literally, and it’s like
he’s made out of fucking granite. He’s got an eight-pack. An eight-pack.”

Spencer had never seen an eight-pack outside
of cyberspace. Until his sexy neighbor, he’d questioned their existence, much
like Bigfoot. The sighting had taken place one morning on his way to get
groceries. Quinn had been on his way to their gated community’s pool, sporting
nothing but low-riding swim trunks and flip-flops. He’d stepped into the
elevator next to Spencer, and the heat outside had nothing on the heat that had
spread through Spencer’s body. Luckily Quinn had been too busy texting to
notice Spencer’s Human Torch impression.

“I have… I don’t even know what this
is.” Spencer lifted up the hem of his apron and the Hulk T-shirt underneath
with a frown. He ran his finger down a groove along his torso as he sucked his
stomach in. “Does this look like muscle definition to you?”

Danny reached over to pat Spencer’s
pale belly. “Looks like you need to stop baking brownies. And get some sun,
man. Look at you. You’re not even white. You’re like, transparent.”

“That’s harsh.” Spencer lowered his
clothes. “I don’t tan like you. I burn. You couldn’t lie to me? Besides, what
am I supposed to say to him? ‘Hi, remember me? I’m the guy who’s been living
next door to you for the past year. We pass each other in the hall every day,
take the elevator together, have parking spaces next to each other, have mailboxes
next to each other, do laundry in the same room together, and shop at the same
supermarket. No? That’s okay. Excuse me while I die of embarrassment.’” Spencer
walked around the kitchen counter and flopped down into a chair, waiting for
the brownies to cool. “The guy doesn’t know I exist. He’s freakin’ Miami SWAT.
He’s probably an overbearing, misogynistic asshole with a giant ego, anyway.”

Danny took a seat next to him, his
expression filled with concern. “You don’t know that. Besides, since when do
you judge people?”

Spencer narrowed his eyes at his
friend. “No one likes a smartass.”

“Says the guy who got a ticket for
mouthing off to a police officer.”

“I wasn’t mouthing off. I was being
witty and adorable. The guy just had no sense of humor. Besides, I was nowhere
near that fire hydrant. He was clearly behind on his quota. Bet that wouldn’t
have happened to Quinn.” Was he pouting? Oh God, he was. Danny was right; he
was sad.

“Probably because he’s SWAT and can
park his ginormous truck wherever the hell he wants.” Danny went to the glass
doors of the balcony overlooking the parking spaces and started laughing.

“You know how they say dogs look like
their owners? I wonder if the same applies to cars.”

Spencer joined Danny at the window, letting out a low
groan. His tiny yellow Fiat gleamed cheerfully beside Quinn’s monster black
Chevy Silverado. “It looks like a sunspot.”


GRAB YOURS TODAY FRIENDS, YOU WILL BE VERY GLAD YOU DID! HERE IS A BIO AND SOCIAL LINKS FOR CHARLIE! 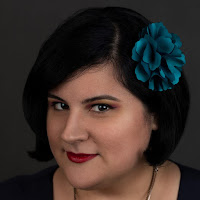 Charlie Cochet is an author by day and artist by night. Always
quick to succumb to the whispers of her wayward muse, no star is out of reach
when following her passion. From adventurous agents and sexy shifters, to
society gentlemen and hardboiled detectives, there’s bound to be plenty of
mischief for her heroes to find themselves in, and plenty of romance, too!

Currently residing in Central Florida, Charlie is at the
beck and call of a rascally Doxiepoo bent on world domination. When she isn’t
writing, she can usually be found reading, drawing, or watching movies. She
runs on coffee, thrives on music, and loves to hear from readers.

THANKS FOR JOINING ME FOR MY BLOG TOUR STOP FRIENDS, YOU WILL LOVE THIS BOOK AS MUCH AS I DID! DON'T FORGET TO ENTER THE GIVEAWAY BELOW AND CHECK OUT THE REST OF THE TOUR STOPS!

August 31:
A Celebration of Books
Sue
Brown
Drops
of Ink 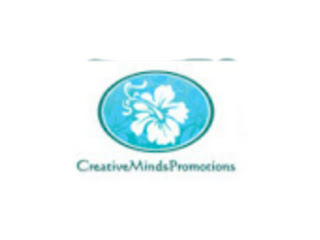 at August 21, 2015
Email ThisBlogThis!Share to TwitterShare to FacebookShare to Pinterest