HELLO FRIENDS! TODAY WE HAVE A POST THAT IS GONNA BE FUN! ME AND MY GIRLS JESSICA KURVERS, GRACE POPE, AMANDA BUTTERFIELD, AMY CASEY AND JESSICA KENNEDY HAVE ALL CREATED A POLL OF OUR MOST RE-READ BOOKS! ( I AM LUCKY THEY DIDN'T STRING ME UP WHEN I ASKED THEM TO CHOOSE!) THE BOOKS ARE BELOW WITH THE COVERS, BLURBS, AND A SMALL POST FROM EACH OF US ON WHY WE CHOOSE THE BOOKS WE DID! ENJOY GUYS AND BE SURE TO VOTE IN THE POLL AT THE END OF THE POST AND SEE WHOSE BOOK WINS!!!

SALVATION: THE FIRSTS AND FOREVER SERIES by: ALEXA LAND

Here is a bit about why I chose this book:

I resonate with the character of Trevor and his never give up attitude. He made the most out of a difficult life to say the least, and he came out on top. Alexa writes her characters in a way that makes you take them into your heart, and Trevor has stayed there for years! If you haven't checked out this book or series please do so! 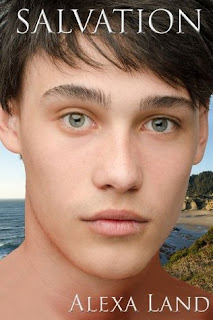 Can two men from wildly different worlds prove to be each other’s salvation?Trevor isn’t surprised that he’s a twenty-year-old virgin. He sees himself as skinny, clumsy, and shy, and is sure no one could possibly want him. Vincent Dombruso is about to prove him wrong.Mysterious and troubled, Vincent masks a lot of secrets behind his handsome exterior. As the spark between them ignites, both men are surprised to find a kindred spirit in such an unexpected place. But Vincent’s Mafia ties and whatever he's not telling Trevor could destroy their chances of a happily ever after.

Here is why Amanda chose this book: ( it is one of my faves too!)

I have been in love with this book since page 1, the way this author writes will make you laugh, cry and even want to throw things! If you want a book that will inspire you even while it makes you cry, then Omorphi is the one for you! 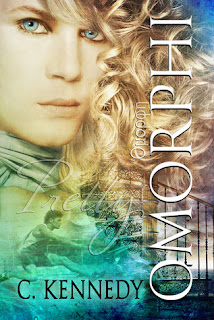 Here is why Jess chose this (amazing) book:

Always by Kindle Alexander, was my first full fledged MM love. It is an emotional roller coaster that you can't help but ride over and over. The power of the emotions in this book will reside in your very soul for years to come. 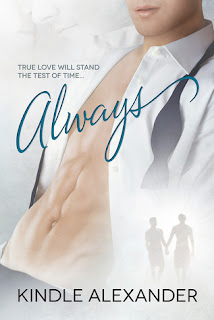 Born to a prestigious political family, Avery Adams plays as hard as he works. The gorgeous, charismatic attorney is used to getting what he wants, even the frequent one-night stands that earn him his well-deserved playboy reputation. When some of the most prominent men in politics suggest he run for senate, Avery decides the time has come to follow in his grandfather's footsteps. With a strategy in place and the campaign wheels rolling, Avery is ready to jump on the legislative fast track, full steam ahead. But no amount of planning prepares him for the handsome, uptight restaurateur who might derail his political future.Easy isn't even in the top thousand words to describe Kane Dalton's life after his father, a devout southern Baptist minister, kicks him out of the family home for questioning his sexual orientation. Despite all the rotten tomatoes life throws his way, Kane makes something of himself. Between owning a thriving upscale Italian restaurant in the heart of downtown Minneapolis and managing his long-term boyfriend, his plate is full. He struggles to get past the teachings of his childhood to fully accept his sexuality and rid himself of the doubts brought on by his religious upbringing. The last thing he needs is the yummy, sophisticated, blond-haired distraction sitting at table thirty-four.

AMY'S PICK: LOST IN THE CROWD by EM LEYA

Jared is a country singer, touring but he just wants a break. Sneaking out after the concert, he runs into Scott the chef at the arena who hides him and takes him home. What happens in a few weeks of Jared not being recognized, having down time, enjoying a sexy Scott, you must read it to enjoy the entire story!! I love these guys! 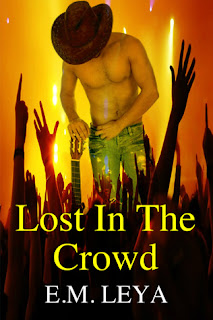 Jared Watson has everything a person could dream of having. He's the hottest country music sensation to hit the charts in years. He travels the world doing what he loves, but something is missing. No matter where he goes, security follows. His manager is always calling or on his case, and no matter where he goes, fans are hounding him for autographs. He would give anything for just a couple days away. A chance to go back to being a nobody.

With two weeks off, Jared finds himself ditching his security team after his last show, desperate to figure out a way to go into hiding for a couple days and relax. Maybe find that missing part of the person he used to be.

When he meets Scott, the chef at the arena he just performed at, and is offered the perfect escape, he takes him up on it. Little does he know, the one night will change his life forever.
Scott treats him like a normal person, not the music idol he is, and their friendship grows.

After years of hiding, he is finally free to be himself and live the life he left behind for fame and fortune. Trouble is, he only has two weeks before he has to be back on the road. Leaving his freedom behind, let alone Scott, might be more than he can bear.

JESSICA KURVERS PICK: THE BRAT AND THE BOSSMAN: THE HEDONIST 3: by REBECCA JAMES

Here is why Jess loves this book: (I am living for this cover and now want to read it)

After their first meeting goes less than stellar, the Brat and the Bossman are thrown back together. Can the straight(ish) Motorcycle Club President convince the stubborn pole dancer to let him help? This book is amazing and you won't want to put it down! 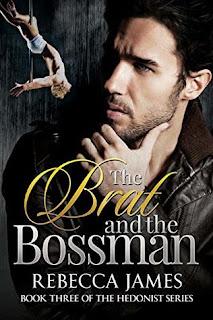 Kicked to the curb by his wealthy parents, Lake Adams works four jobs just to get by. When handsome Blaze Harrington walks back into his life, Lake doesn't have the time to flirt. Besides, the first time they had met, the sexy biker had turned Lake down. Now Blaze seems interested, but in more than just a one-nighter.And Lake isn't boyfriend material.Ever since his older brother died, Blaze has run the Hedonist Motorcycle Club. He also owns a porn company, Hard Time Productions. When he decides to merge with another company, he's surprised to find his new business partner's PA is Lake Adams, the feisty, sharp-tongued young man Blaze had met at a party over a year ago. Blaze has come to terms with a lot of things since then and, after some initial uncertainty, wants to give dating Lake a try. But the guy's burning the candle at both ends and determined not to make things easy for Blaze. However, the more Blaze sees of Lake, the more he's convinced the man is worth the effort.

And Blaze is a determined man.

GRACE'S PICK: STRENGTH OF THE MATE: THE TAMENESS OF THE WOLF 3 by KENDALL McKENNA

While I normally re-read a series in order, Strength of the Mate is a book that I pull out to read on it's own.  First off, this book has shifters, men in uniform, lots of action... of course, it's an amazing read.  The plot and military background is amazing and I'd have been enthralled without them, but the MCs make this a top tier book for me.  Their personalities are amazing; Dawson's openness and Adam's pain seem to balance out, and the dialogue with them and their peers is spot on.  The humans and wolves stationed with them round this novel out so well and, PLUS, Noah and Lucas, Tim and Jeremy, all make appearances.  And, as I refuse to give spoilers, I'll just say that I cry every dang time I read it, multiple times.  If you love military men, action, hot and steamy men or watching the good guys take chunks out of the bad guys, this series, but especially this book, is a must read. 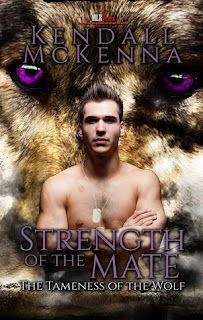 Rampaging werewolves cause the True Alpha to send his Omega, Dawson Rivers, to bring them under control. Can Adam Madison help or hinder Dawson's mission?
Adam Madison is in Iraq, driving supply trucks for the Marines, but he still can't outrun his personal ghosts. Outside the wire, insurgents are a relentless threat. Inside, renegade werewolves are a constant danger.
Dawson Rivers is on a mission for the True Alpha---bring the rampaging shifters under control. Adam proves to be invaluable to his task. Their intense mutual attraction explodes into a powerful physical, and emotional connection.
Their future together is in peril, when Adam's convoy is ambushed. Can they learn to rely on the strength of their bond? Adam staying alive long enough for Dawson to find him depends on it.

THERE YOU HAVE IT FRIENDS, SO WHICH ONE IS IT GONNA BE? WHO HAD THE BEST BOOK CHOICE? VOTE BELOW AND LET'S FIND OUT! YOU HAVE UNTIL THURSDAY EVENING AT 7 EST! VOTE VOTE VOTE!

at January 20, 2020
Email ThisBlogThis!Share to TwitterShare to FacebookShare to Pinterest