HEY GUYS, IF YOU KNOW ME YOU KNOW HOW MUCH I LOVE V.L. LOCEY AND HER POINT SHOT SERIES! I AM THRILLED TO BE PART OF PROMOTING THE BOXED SET OF THIS AMAZING TRILOGY (AND ANY CHANCE I GET TO TALK ABOUT MY VIC I GRAB!) LOOK BELOW FOR BOOK INFO AND MORE INCLUDING A GIVEAWAY! UNDER EACH BOOK BLURB I HAVE PUT MY REVIEW LINK FOR THAT BOOK! I HAVE REVIEWED ALL OF THESE BOOKS AND LOVE THEM SO MUCH! LET'S TAKE A LOOK!

Victor Kalinski, all-star forward for the Boston Barracudas, is one of the biggest jerks in professional hockey. Before long his aggressive attitude gets him shipped off to play in the minor leagues.

Furious, he takes to the ice with equal amounts of skill and scathing sarcasm, which doesn’t win him any friends—except for good-natured alternate captain Daniel Arou. He won’t take any of Vic’s crap, and he won’t take no for an answer.

But Vic’s troublemaking is pulling his career one way while Dan’s talent is pushing his in the other. However much they scorch the sheets, they might soon be separated by more than Vic’s fear of being hurt.

Life has been treating Victor Kalinski well, which is a surprise for the ginger-haired forward with the venomous tongue. His career is somewhat stable, at least for another season. His relationship with Cougars alternate captain Dan Arou is deepening, despite the fact that Daniel has yet to come out of the closet.

It’s typical Kalinski luck when a puck bunny he shared a drunken night with several months ago slaps him with a paternity suit. Despite the sizzling passion and painfully heartfelt connection between them, Dan doesn’t take the news well, and heads back to Canada alone.

If he wants to make things right and win back the man he loves, Vic has no choice but to swallow his pride—and nobody’s prouder than hotheaded, ego-driven Victor Kalinski.

What a difference a year makes. Twelve months ago, Victor Kalinski was one of the best and most controversial ice hockey players in the pros. This year he’s playing in the minors, has a paternity case pending, and has just been vindictively outed to the world by one of his own teammates.

But he seems to find life in the tiny town of Cayuga to his liking. A large part of that is Dan Arou, the Cougars’ alternate captain and the man who now holds Victor’s heart. Surely venomous, viper-tongued Victor hasn’t been mellowed by love!

Well, perhaps a little. But that doesn’t mean he doesn’t intend to get sweet revenge on those who’ve hurt the man he loves and the friends he’s somehow made along the way.

I LOVE EACH AND EVERYONE OF THESE BOOKS AND YOU MIGHT WANNA CHECK OUT MY RATING PICS! HERE IS AN EXCERPT FROM TWO MAN ADVANTAGE:

Lying beside him in the dark, I was thinking about getting under the covers to suck him off when he asked me what I thought about the team.
I shrugged the shoulder his dark head rested on. “They suck, man.” I ran my tongue over my teeth.
“Think so, do you?” he enquired. “I hate that sound you make when you suck air through your teeth.”
“Um, yah,” I snorted, my palm resting on his shoulder. “I mean, no offense, but if not for you that bunch of losers wouldn’t have the few wins they do. And tough shit about the teeth sounds.”
Dan’s exhalation blew over my nipple. It puckered up into a tiny pink bead. I really wanted to get oral on this man. He seemed to be chatty, though. I didn’t dare comment on how girly that was. My ass was still recovering from the last slur against his manhood I’d made.
“You’re right,” he confessed, sitting up against my wishes to turn on the light. I squeezed my eyes shut and bitched about the wattage. “You think you could help us out?”
My nose wrinkled. “Dan, man, look, maybe if I were going to be here for the season, yeah, I’d be happy to pass along what tricks I’ve learned. But this trip is just for a week or two.” I had hoped he would drop it as soon as I weaseled around. He didn’t. His blue eyes stayed glued to me. “Arou, man, don’t make this harder than it is. Why don’t you just turn out the light, lie down and let me get you off again?”
I saw the desire flare up in his gaze. “I’d consider it a favor if you gave the other guys a hand. They’re buddies, you know?”
“Whose buddies? Not mine. They all fucking hate me,” I countered, pulling him back to the bed.
He flopped down with a sigh of exasperation. I rolled over him and began tasting his neck. He was just as bound up in this crazy thing we shared as I was. His neck and jaw tightened as he worked to fight the fire trail where my tongue and lips moved over him, but the nudge of his erection against my stomach showed he couldn’t control the need for me any more than I could handle my need for him.
“That’s because you’re a dick,” he ground out as I tongued his navel.
I agreed, then licked a long trail across his belly. 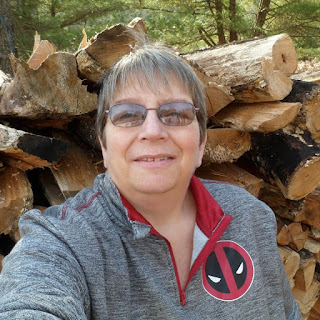 When not writing spicy romances, she enjoys spending her day with her menagerie in the rolling hills of Pennsylvania with a cup of fresh java in hand. She can also be found online on Facebook, Twitter, Pinterest, and GoodReads.

THANKS FOR DROPPING BY GUYS, AND CHECK OUT MY REVIEWS AND GRAB THESE BOOKS! YOU WILL LOVE VICTOR AS MUCH AS I DO (BUT SORRY YOU CAN'T HAVE HIM :p) SEE YOU NEXT TIME, AND DON'T FORGET TO ENTER THE GIVEAWAY BELOW!

a Rafflecopter giveaway
at March 03, 2017
Email ThisBlogThis!Share to TwitterShare to FacebookShare to Pinterest