HEY FRIENDS, BOY AM I LATE TO THE PARTY ON THIS ONE BUT I LOVE LOVE LOVE THIS BOOK AND CAN'T WAIT TO BRING YOU MY (LATE :( ) REVIEW!! SO LOOK BELOW FOR THAT AND MORE INCLUDING AN EXCERPT, SO LET'S TAKE A LOOK!! 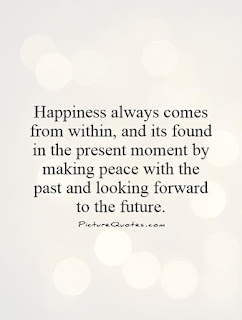 YOU DON'T KNOW HOW PERFECT THIS QUOTE IS FOR SCOTT!!! HERE IS MY REVIEW!

A sea change could be just what the doctor ordered.

Doctor Scott Penney used to be a Paediatric Oncologist—until he burned out. Watching children suffer and die took its toll on his mental health. To cope, he used anonymous sex as an emotional crutch, thinking it was better than hitting the bottle. But that inevitably destroyed his relationship with the man he loved.
With his tail between his legs and a year’s worth of celibacy under his belt, Scott accepts a position as an Accident and Emergency consultant, leaving his career in oncology and London behind.
Ben Jenkins is a paediatric nurse who loves his seaside city, his job, and his faithful old Labrador, Happy. When he meets the new doctor, Ben falls for Scott’s kind-yet-reserved personality—not to mention his good looks. Scott is great with the children who come through the hospital, but Ben senses there’s more to Scott than meets the eye.
Scott tries to resist Ben’s sunny charm—Scott’s not boyfriend material, after all—but it’s impossible not to fall in love with the sad looking old dog and his charming owner. As Scott and Ben get closer and the weather heats up, tragedy strikes and Ben is left wondering how much of Scott’s history he actually knows.
For them to move forward, Ben must show Scott that no matter what happened in the past, a beautiful day can always start after the sun sets.

**This can be read as a standalone** 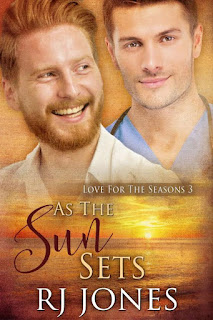 Scott is running from his past mistakes and what he doesn't know is that until he can make peace with himself, he will never be happy. When he meets Ben after he moves to a small town to start over, he realizes that maybe he had found someone who he wants to start something with, but does he trust himself to not mess things up?

Ben likes Scott, but does he know everything about him? What will happen when Scott is forced to deal with his past one way or another? Will it be to much for them? Can Ben convince Scott that sometimes we must look forward not back?

This is an amazing book, and you can read it as a standalone but I encourage to read all the books in this series! Thanks Rj, for another amazing piece of writing! 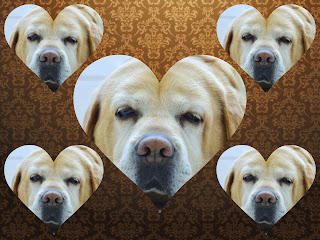 I LOVE BEN'S DOG HAPPY, SO I JUST HAD TO DO THIS RATING! GRAB THE BOOK AND YOU WILL LOVE HAPPY TOO!

I SHIFTED from foot to foot while Ben gave Happy a quick brush down. “Have you eaten? I mean, we missed the pizza and…” I stared at the floor, willing my stomach to stop rolling. Maybe food would help settle it, buy me some time to get myself together.
Ben looked up at me from his spot on the kitchen floor. He’d brushed Happy and was sweeping the bits of dirt into a small dustpan. His eyes were warm but held a concern in them I hadn’t seen before. He turned his attention back to his dog. “Go and lie down, boy.” He patted his rump, Happy seemingly content to go to his bed under the window and curl up. After putting the pan away, Ben came and stood before me, taking my hand in his. “We’ll eat later. C’mon.” He dragged me up the stairs to the bathroom.
I watched in the doorway as Ben turned on the tap for the shower. It was foolish. I shouldn’t be so nervous around a man I planned on having sex with, but I didn’t want it to turn out like last time.
I saw a movie once where someone said, ‘Even bad sex is good sex.’ I couldn’t agree with that statement. I knew what good sex felt like. I also knew that last time I’d been in Ben’s bedroom, it had been a complete fucking disaster.
What if we weren’t compatible in bed? What if we tried to make a go of this relationship—if that’s what it was—and it died all because I couldn’t get past my nervousness in the sack?
“Leave it at the door.” Ben stripped out of his clothes, his gaze holding mine hostage.
“My clothes?” Did my voice just crack? I coughed, trying to clear my throat.
“No. Your anxiety. From now on when we’re together, your nerves are not allowed here.” Ben raised a brow. “Okay?” He stood naked before me, the freckles on his pale chest standing out like a beacon. He grabbed my hand. “It’s just me and you. We don’t have to do anything you don’t want or aren’t ready for, but your apprehension isn’t needed. We’re just two guys who are attracted to each other. I know you’re not a virgin.” Ben quirked his lips, that same smile that lit up any room he walked into. “Come shower with me. Let me show you how to let go. Let me wash it all away.”
Ben kissed me tenderly while helping me out of my clothes. His long, perfectly shaped dick hung flaccid against his thigh, and I wondered if I’d ever be able to get an erection again or would my nerves render me impotent. Despite him telling me to leave my doubts at the door, my skin tingled with unwanted tension. I tried to show him I was okay, but I feared my smile came out as more of a grimace.
“What if—?”
Ben pressed a finger to my lips. “They’re left at the door, remember? Leave them there. Clear your head.” He removed his finger and replaced it with his lips, giving me a brief kiss before stepping into the shower.

TRUST ME GUYS, YOU WILL LOVE THIS BOOK AS MUCH AS I DO! HERE IS A BIO AND SOCIAL LINKS FOR Rj, LOOK HER UP FRIENDS, SHE IS AMAZING!

THANKS SO MUCH FOR JOINING ME FOR THIS REVIEW AND PROMO POST, AND Rj I AM SO SORRY I AM LATE WITH THIS, BUT THIS BOOK IS AMAZING AND I CAN'T WAIT TO SEE WHAT YOU HAVE IN STORE FOR US NEXT! 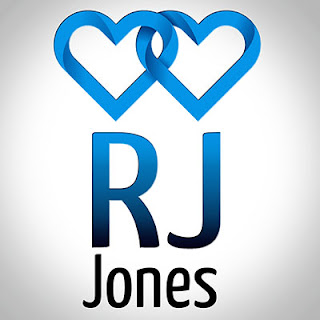 at March 03, 2017
Email ThisBlogThis!Share to TwitterShare to FacebookShare to Pinterest