THE SECRETS IN MY SCOWL RELEASE DAY BLITZ POST & REVIEW!

HELLO FRIENDS, HERE IS MY  RELEASE DAY BLITZ POST FOR THE SECRETS IN MY SCOWL BY A.E. VIA! LOOK BELOW FOR BOOK INFO, MY GIRL GRACE'S REVIEW, AN EXCERPT, TEASERS AND MORE, INCLUDING A GIVEAWAY! LET'S GET TO IT!

Thank you for coming over to take a look at my new enemies to lover’s romance story, The Secrets in My Scowl, releasing today! This book was a fun break from my trouble-making alphas. I loved doing a book that focused a lot more on wooing and romancing instead of police chases and fast military action. The reviews are looking great and I appreciate everyone that’s already picked it up. I hope you’ll enjoy reading this one as much as you’ve enjoyed my others. I want to thank Bike Book Reviews for hosting me again, it’s always a pleasure showing up here.
One last thing, make sure you stick around for the giveaway and a chance to win a brand new 7” Fire tablet, or a $25 Amazon gift card, or my favorite, an advanced copy of my upcoming release from the best-selling series Nothing Special 5 – yes, God and Day’s wedding has finally arrived… or has it?


NOW FOR SOME BOOK INFO AND GRACE'S REVIEW!!
Sparks ignite and tempers flare when a sexy, optimistic wedding planner moves his business in across the hall from a jilted, divorce lawyer’s practice. “Look smart ass. This is the last time I’m going to remind you about breaking sections of the lease. If there’s a next time, I won’t stop until you and your frilly, white wedding shit is thrown out of here. Do you got it?!” Wylde looked in Jacob’s pained eyes and answered in his deep voice. “Yeah, counselor. I got it.” From high school, up until he became a successful attorney Jacob Snowden was convinced that love had it out for him. “Everyone left,” were the words he lived by. His mother, his high school sweetheart, his father, and his fiancé, all left Jacob just when he felt it was safe to let down his guard. Not any longer. Jacob was a determined man, set at keeping people at a distance. If his six foot one, military-made body didn’t scare people off, his permanent scowl surely did. At almost forty, Jacob’s social life was non-existent, but he told himself his work fulfilled him. He helped people get out of their loveless marriages. Jacob Snowden was one of the best divorce lawyers on the east coast and was damn proud of it. So, imagine his disdain when a wedding planner moves into the suite directly adjacent to his… an insanely masculine, male wedding planner. Wylde Sterling had made quite a name for himself in his hometown of Roanoke, Virginia, working for a wedding planner that catered to the elite. He was known for his charm and impeccable taste. Yep, he was incredible at giving couples the wedding of their dreams. But he wanted nothing more than to plan his own. After striking out in love more times than he cared to admit, Wylde decided to start his own business in a new city, hoping Richmond would give him a fresh start. Things started out wonderfully – until he started to piss off the angry divorce attorney next door. Wylde could see past Jacob’s mean scowl, knowing there was a reason for it. It was the man’s defense mechanism, his means of keeping people away. Everything in Wylde told him to stay away, but he believed Jacob just needed to meet a man who had been hurt as badly as he had.

This story ends in an HEA and does not end on a cliffhanger. 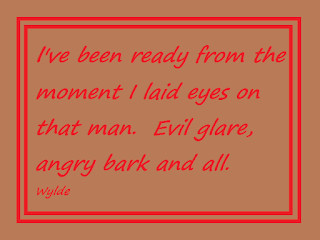 I must admit, I had extreme high hopes for this book knowing who the author is.  There hasn’t been a book by AE Via I’ve read that disappointed me.  And, thank goodness, this one definitely is a winner!
I was a bit concerned with how long it took to meet Wylde but as the story unfolded, I realized we needed a thorough background to understand why Jacob was so internalized and controlled.  What he goes through with his family and first loves affects him dramatically and he eventually decides living without love is better than allowing someone to hurt him again.
Wylde comes with his own issues but he refuses to allow his past to make him run from love again.  Moving on and opening his own wedding planning business is a dream come true and now he’s ready to find the man to live that dream with.
When Wylde and Jacob meet, the sparks fly immediately.  Jacob, in routine Jacob fashion, fights his attraction tooth and nail until Wylde catches him on a very bad day and finally, breaks through his shell.  Wylde’s insistence on putting Jacob first could be what finally opens Jacob up to what he’s always craved.
There were several times through this book that I wanted to smack Jacob on the back of the head and shake him, followed up by a hug.  But watching his layers of protection slowly thaw with Wylde and allow the possibility of love into his heart was absolutely amazing.  So, grab some tissues, turn off the phone and settle in for an angst-ridden and sexy read.
:

THE 5 HUNK A HUNK A BURNING LOVE RATING :p!!

I AM SO IN LOVE WITH THIS REVIEW AND THIS IS THE PERFECT RATING PIC!!! I AGREE WITH GRACE, THIS IS AN AMAZING READ AND YOU NEED IT NOW! GRAB IT BELOW:

AUTHOR BIO:
A.E. Via is an author in the beautiful gay romance genre and also founder and owner of Via Star Wings Books. Her writing embodies everything from hopelessly romantic to adventure, to scandalous. Her stories often include intriguing edges and twists that take readers to new, thought-provoking depths.
When she’s not clicking away at her laptop, she devotes herself to her family—a husband and four children. Adrienne Via has tons of more stories to tell, but she really would like to hear yours. Via Star Wings Books is currently accepting submissions for established and aspiring LGBTQ authors.
Visit my site to learn more! Go to A.E. Via’s official website http://authoraevia.com  for more detailed information on how to contact her, follow her, or a sneak peak on upcoming work, free reads, VSWB submissions, and where she’ll appear next

Excerpt
Jacob walked down the sidewalk unaware of the blistering cold weather, feeling like someone had just kicked his ass. He didn’t like being played with; he was too old for games. That well-dressed man was just sticking up for his girl or something, because there was no way in hell that guy was a goddamn wedding planner. He looked like an athlete, a swimmer or maybe a diver. With that long, slim body and those thin fingers. His face was narrow, his strong jaw highlighted by a perfectly groomed goatee. Shit. The same light hair that framed his tender-looking lips. Jacob groaned as he yanked his car door open. He hated that he got caught staring, wondering how the man looked with that man bun undone, and the sandy-brown hair framing his face.
He’d never heard of anyone named wild, well that wasn’t how it was spelled, but it was still an interesting name. Jacob sped down E. Broad and slung a hard left onto S. Belvedere. He needed to get home and work off the heat that’d been building in the pit of his stomach… and a little lower. That goddamn wedding planner smelled like the best bar of soap ever invented. He’d never been hit so hard by a fragrance. Jacob’s dick rose a little higher, making him groan since he refused to touch it. He was not going to let that smooth criminal rob him of his self-control. He made a quick left onto W. Main, overshooting the speed limit by at least twenty miles per hour. That was a reckless driving ticket if he was stopped. There were a lot of restaurants on this street and Jacob thought of pulling into one, but quickly decided against it. Finally turning onto N. Plum, he entered his condo’s parking lot and hurriedly took the elevator to his apartment.
His stomach growled, reminding him he’d skipped lunch and now dinner, while he changed into his workout clothes. He’d run until there were no more thoughts of Wylde. Damnit, Jacob even liked the way that name sounded on his tongue. His cock protruded from the thin nylon shorts as he set his treadmill to the most difficult setting and pressed start. Jacob was barely able to finish, but he did it, making him feel more victorious and more in control. He showered quickly, washing his groin too fast for it to feel good. While he ate takeout in his dark living room, he picked up his cell and called Patrick again… no fucking answer. Goddamn him.
YOU GUYS HAVE NO IDEA HOW HOT THIS ONE IS! CHECK OUT THIS TEASER: 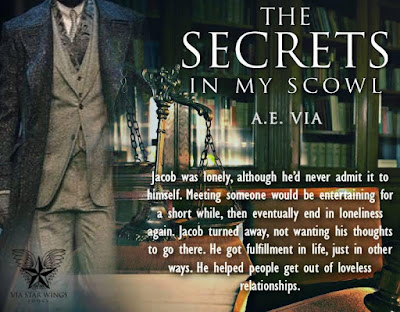 GREAT RIGHT? ENTER THE RAFFLECOPTER GIVEAWAY BELOW FOR A CHANCE TO WIN A KINDLE FIRE TABLET!!! OMG ENTER NOW!!

THANKS FOR JOINING ME FOR THIS RELEASE BLITZ POST, YOU WILL LOVE THIS BOOK AS MUCH AS GRACE AND I DO! THANKS AGAING GRACE, FOR THE AWESOME REVIEW! CLICK THE BANNER BELOW TO BE DIRECTED TO THE SECRETS IN MY SCOWL RELEASE DAY PARTY  PAGE, HOSTED BY: CHELSEA AUTHOR PROMOTIONS!! 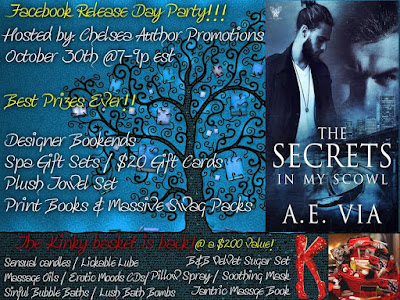