HEY GUYS, THANKS FOR JOINING ME FOR MY RELEASE DAY BLITZ STOP OF BETTING ON FOREVER, THE BREAKFAST CLUB 2; BY FELICE STEVENS, I HAVE MY GIRL CLAUDIA REVIEWING FOR ME AND TONS OF EXTRAS INCLUDING TEASERS, SO LET'S GET STARTED WITH SOME BOOK INFO!


BLURB:
A weekend fling in Atlantic City couldn’t be more out of socially shy Zach Cohen’s comfort zone, but a bet with his best friends forces him to put aside the humiliation he’s hidden for years, stepping away from behind his computer screens and on line world. When he meets Sam Stein, despite their spark, Zach expects nothing more than a night of passion and a kiss goodbye. Yet weeks later, he can’t keep the man out of his head.
After a split second decision with tragic results ends his twenty year police career at the same time his relationship falls apart, Sam Stein is drifting through life. At his best friend’s urging he agrees to a trip to Atlantic City to clear his head. What Sam doesn’t plan on is meeting Zach Cohen, whose sweet nature and honesty has him thinking maybe he could move forward, until Zach leaves him without explanation, reinforcing Sam’s belief that people can’t be trusted.
Well-meaning friends refuse to let Zach and Sam hide from each other, forcing them to realize their weekend is much more than a one night stand. Before that can happen, Zach must come to terms with his past and stand up for his own independence, while Sam has to learn to take a chance and believe in himself and people again. All bets are off when dreams become reality and forever doesn’t seem to be long enough.

I SO LOVE THIS QUOTE! GREAT JOB CLAUDIA! HERE IS HER REVIEW:

It was impossible to forget Julian’s friends from Beyond the surface – Specially Zach - his shy and quiet demeanor grabbed me from the start.  I knew there had to be a sad story behind all his social awkwardness.

We could see the sparks flying between Zach and Sam when they met, especially because Zach had decided to be daring and act out on his attraction to Sam…  but after spending a great time together, Zach’s insecurities resurface and he begins to doubt himself, so he grabs the first excuse and leaves Sam.

I wanted to smack Zach’s head when he and Sam met again, weeks later and he acted like it was no big deal… he had being thinking about Sam nonstop!!! But he finally took the chance and decided that this time he needed to be the one to take the first step… and to persuade Sam into give him another chance.

From then on, it was really sweet to see Zach overcoming his past with Sam’s support, and Sam opening up to life and love again… How cute to see them finally finding love, happiness and joy.

Those two were simply made for each other, and I loved to see Julian and Nick again (You’ll love to see them too, since they have an special appearance in the story – hehehe).

I had a great time reading it and can’t wait for Marcus’s time to finally find love! 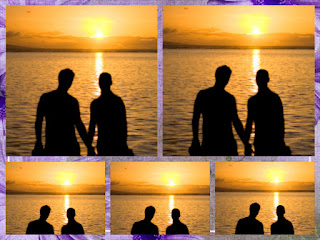 the 5 couple on beach at sunset rating :)

GREAT REVIEW CLAUDIA, LOVE THE RATING PIC! HERE ARE THE BUY LINKS FOR THIS ONE GUYS, FOLLOWED BY SOME TEASERS, SNATCH THIS BOOK UP!

I LOVE THESE TEASERS! HERE IS AN EXCERPT:

“I always wanted to take a walk along the beach at night.” Sam stopped by the steps leading down to the sand and shoreline. “Want to come with me?”

He extended his hand and without hesitation Zach took it, their palms sliding, fingers naturally lacing together. There was neither the desire nor inclination to speak as they advanced to the edge where the tide rushed in and pulled back.

Zach let go of Sam’s hand, took off his shoes and rolled up his pant legs. Sam did the same; then once again they held hands, still silent, and walked along the coastline, letting the cold water lap at their ankles and toes. A few other people had the same idea as them; Zach spotted several couples entwined on the sand, but he barely paid them any attention. How could he, when every nerve ending in his body was zeroed in on the touch of his fingers with Sam’s?

Always the romantic; Zach held firm to the belief it was possible to find that true love and happy ending, though life made it more elusive for some than others. It wasn’t the Lifetime movies Marcus teased him about watching that he could point to for proof—he knew the real thing when he saw it happening before his eyes. Julian and Nick reunited after all these years, finally able to show the world how much they loved each other, was like a fantasy turned to life, and he was thrilled for his friends.

Not to say he didn’t have his own fantasies; he may not be the wildest guy, but he wasn’t dead yet either. This right here was at the top of his list: to walk along a moonlit beach with a handsome man and be kissed. Zach had the moonlight, the beach, and the handsome man. Now he needed that kiss.

YOU HAVE TO READ IT NOW RIGHT? WELL GRAB IT ABOVE AND GET TO IT! HERE IS A BIO ON FELICE AND HER SOCIAL LINKS:

Felice Stevens has always been a romantic at heart. While life is tough, she believes there is a happy ending for everyone. She started reading traditional historical romances as a teenager, then life and law school got in the way. It wasn't until she picked up a copy of Bertrice Small and became swept away to Queen Elizabeth's court that her interest in romance novels was renewed.
But somewhere along the way, her reading shifted to stories of men falling in love. Once she picked up her first gay romance, she became so enamored of the character-driven stories and the overwhelming emotion there was no turning back.

Felice lives in New York City with her husband and two children. Her day begins with a lot of caffeine and ends with a glass or two of red wine. Although she practices law, she daydreams of a time when she can sit by a beach and write beautiful stories of men falling in love. Although there is bound to be some angst along the way, a Happily Ever After is always guaranteed.

THANKS FOR JOINING ME ON THIS RELEASE DAY BLITZ GUYS, AND THANKS CLAUDIA FOR ANOTHER AMAZING REVIEW! SEE YOU GUYS NEXT TIME!

at November 17, 2015
Email ThisBlogThis!Share to TwitterShare to FacebookShare to Pinterest