HEY FRIENDS, IT IS FINALLY RELEASE DAY FOR GAME MISCONDUCT; THE FOLLOW-UP TO TWO MAN ADVANTAGE BY V.L. LOCEY! MAN I LOVE THESE BOOKS, AND MY VIC, OH YEAH I LOVE ME SOME OBNOXIOUS VIC ;p! I HAVE MY REVIEW, LINKS, A SMALL EXCERPT, AND EVEN A AUTHOR BIO AND SOCIAL LINKS, SO LET'S GET GOING: 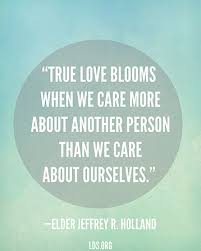 THIS QUOTE APPLIES TO THIS BOOK FOR SURE!! HERE IS MY REVIEW:

Life has been treating Victor Kalinski well, which is a surprise for the ginger-haired forward with the venomous tongue. His career is somewhat stable, at least for another season. His relationship with Cougars alternate captain Dan Arou is deepening, despite the fact that Daniel has yet to come out of the closet.
It’s typical Kalinski luck when a puck bunny he shared a drunken night with several months ago slaps him with a paternity suit. Despite the sizzling passion and painfully heartfelt connection between them, Dan doesn’t take the news well, and heads back to Canada alone.
If he wants to make things right and win back the man he loves, he has no choice but to swallow his pride—and nobody’s prouder than hot-headed, ego-driven Victor.
Reader Advisory: This story has graphic sexual language and scenes—no closed bedroom doors (or other rooms) here! 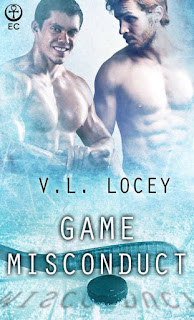 Man I love this book just as much as I knew I would! V.L. Locey writes characters you get attached to, and they are so well written you feel as if you have known them forever! I can't wait for you guys to read this one and the first one, Two Man Advantage!

You know those characters you fall in love with and just can't wait to see what they will get up to next? Well that is Vic for me, and this book is just the Vic fix I needed!

Dan and Vic are doing good, even though Dan isn't out, but they are making it work, that is until a puck bunny hits Vic with the fact that he has a baby on the way! To say Dan doesn't take this well is an understatement!

Vic had  one night with a girl when he and Dan were apart, and it is coming back to haunt him, can he convince Dan that he is in this for the long haul, and every time they have problems, Vic won't go looking for a good time?

Add to this the problem of someone taking the matter of Dan coming out into their own hands, will this asshat succeed in outing Dan to the world before he has the chance too? What about Vic and the baby, will he warm up to the idea of being a father at all?

Yes friends, you have to get this one, if you loved or hated Vic in the first book (don't tell me if you hated him :P) you will warm up to him in this one for sure, and Dan is just as much of a sweetie as he always was! Thanks V.L. for a followup that does the first book justice and more!!! 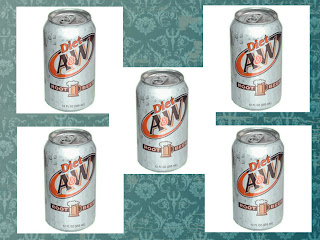 I JUST HAD TO DO THE DIET ROOT BEER RATING, YOU WILL SEE WHY ;P!! HERE ARE THE LINKS FOR THIS ONE:

GRAB IT FRIENDS, YOU WILL LOVE IT TOO! HERE IS AN EXCERPT TO EXPLAIN THAT RATING PIC :p:

“Coke is great stuff,” I sighed after downing half a can in two gulps. Dan stood across the room. He looked damn good even if he did have helmet hair and no skates on his feet. He was working the inside of his bottom lip with his teeth. I wanted to nibble if for him but kept that suggestion to myself. “So did you get yourself something to drink?”
He nodded. The motion sent a shank of sweat-dried hair into his right eye. He tossed it aside. The need to roll my eyes was freaking overwhelming. Seemed he was in one of his reflective moods. I should have asked Brad the medic to hang around after the stitchery was completed. At least he’d talked.
“Diet root beer, right?” I said to try to lure him into making wordage happen.
“Yeah, diet root beer.”
“I knew it. That’s your go-to drink when you’re stewing.”
His plump lips flattened. “I’m not stewing.”
“Oh yeah, you are. What I don’t get is what you’re stewing about.”
Dan padded over to where I sat on the gurney. He looked even shorter than his five-foot-six-inches with me seated up so high. He was one sexy fucking Hobbit. Buggery in the Shire. I could get into that big time.
“He could have kicked you in the face, blinded you, or worse, hit you in the neck.”
“Pfft,” I countered. Dan’s scowl deepened. “That ignorant dickhead is still trying to recall his rudimentary English. Did you see how fucked up he was after I introduced his thick skull to the floor? Fucking homophobic bastard will think twice before calling you a fag, if he can even think once from now on.”
“Is that what started that? Him calling me a fag?”
“Yeah.”
I tipped up my soda can to drain it. When I’d finished it off, I found Dan staring at me with some emotion I couldn’t quite put my finger on. Concern or maybe confusion, if I had to guess.

HAHA TOLD YOU I HAD TO DO IT! HERE IS AN AUTHOR BIO AND SOCIAL LINKS: CONNECT WITH THIS AUTHOR, YOU WILL BE GLAD YOU DID, I LOVE THIS LADY!!! 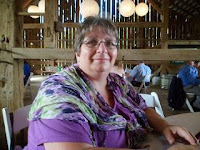 THANKS FOR JOINING ME FOR MY RELEASE DAY REVIEW OF GAME MISCONDUCT! READ IT FRIENDS, AND YOU WILL BE ITCHING FOR THE NEXT BOOK JUST LIKE ME!!