HEY FRIENDS, I AM SO EXCITED TO BE A PART OF THIS BLOG TOUR! AS YOU MAY REMEMBER I REVIEWED THIS BOOK NOT LONG AGO, SO IN ADDITION TO ALL THE OTHER GREAT INFO IN THIS POST, I WILL PUT THE REVIEW LINK IN SO YOU CAN SEE HOW MUCH I LOVED THIS AMAZING BOOK ( BELIEVE ME IT'S A LOT ;P) LET'S GET STARTED: 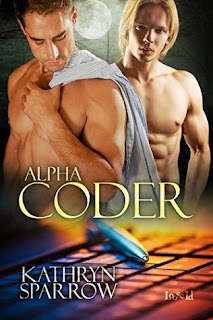 Book Blurb
As the second son, Liam Reed never expected to be a werewolf Alpha. He preferred to develop software for Soft Corp, but when his brother Jason died in a car accident, their father forced Liam to assume leadership of the pack. Liam plans to govern with compassion, instead of ruling through fear, but pack member Bradley Karr undermines Liam’s leadership, biding his time before challenging for Alpha. Tired of pack politics, all Liam wants is to program and find his mate, but he fears that neither is in his future.When his mate, werewolf Cody Jones, starts working at Soft Corp as Liam’s intern, sparks fly. However, a relationship with Cody could get them both fired for fraternization. And, that's not the worst problem. Cody doesn’t seem to accept Liam as his mate.Liam’s only chance at happiness is to win Cody over while keeping their relationship a secret. But really, Cody would never stay with an introverted geek like him, an ineffectual Alpha failing to live up to his brother’s legacy.

I CAN'T TELL YOU HOW AWESOME THIS BOOK IS, WELL I DID TRY WITH MY REVIEW ;P, HERE IS THE LINK: CHECK IT OUT!!


NOW FOR AN AUTHOR POST, WHICH IS AWESOME AND TELLS YOU MORE ABOUT THE VERY ELUSIVE EMET SODIT!!

Hi, my name is Kathryn Sparrow and I’m the author of Alpha Coder. Thank you to Bike Book Reviews for hosting me today.
In Alpha Coder, Liam and Cody get help from a secret society, the Emet Sodit. Not much is known about the Emet Sodit but I’ve uncovered a few facts that I thought I would share.
The Emet Sodit has been around for a very, very, very long time. They have records that date back thousands of years in a variety of languages, some of which are no longer spoken.
The group is organized by sectors and they have taken on the mission of acting as the police force for people with supernatural abilities. For example, if a werewolf kills someone, the Emet Sodit steps in and incarcerates the offender since a human prison would be insufficient.
The Emet Sodit is extremely skilled at keeping secrets. In fact, few werewolves even know the society exists. When a new Alpha takes over a pack, they learn about the society.
To keep their secret, the Emet Sodit work in the shadows, but they are extremely well equipped and well-funded. It is unclear what the source of these funds is and how new members are recruited.
However, policing supernatural beings is not the Emet Sodit’s primary mission. Their mission is to keep the secret of the existence of supernatural powers from the human population at large. In the past, humans have proven that anything they don’t understand, especially something more powerful than they are, must be contained and/or killed. However, not all humans feel that way. A few banded together to protect those who were different.
The members of the Emet Sodit will do whatever it takes to keep this secret, including cover up information and intervening  when something threatens to reveal it. They will lie, steal, and kill if necessary.
At least, all of this is true, in theory. In practice, the Emet Sodit is like any other organization of humans. Each individual has their own interpretation of the mission and acceptable means to achieve it. Many individuals have their own agendas and reasons for joining the Emet Sodit and not all of these are altruistic. Finally, not all members are human. The Emet Sodit has its fair share of supernatural members as well.
We only see a very limited glimpse of the Emet Sodit in Alpha Coder, but they will be making appearances in future novels.

LOVE LOVE LOVE THIS POST, THANKS SO MUCH KATHRYN! :) NOW FOR AN EXCERPT:
Excerpt
A large African American man stood beside Liam. “Hello, Liam. I’m Joaquin Crawford.”
Liam’s mind raced. Joaquin Crawford was the head of the Emet Sodit for the New England sector. They were still working out the details for how to deal with Bradley. “Is there an issue?”
Joaquin Crawford smiled. “No issue. We’re still verifying your findings. I came to watch Cody fence. We like to monitor this kind of activity.”
Kind of activity? What did that even mean?
“Normally, we would be a little more circumspect, but given the situation, a personal visit seemed warranted.”
The thing with Bradley had put Cody on their radar? Great. Big Brother was watching. The Emet Sodit helped packs keep themselves secret, but they also policed them to ensure humans weren’t being harmed.
“Well, he’s just about to fence over there.” Liam pointed to where Cody and McDonald were putting on their masks and testing their weapons.
“I know. I’ve been watching the match. This is the same guy who beat him in the first round.”
He knew? He’d been here. Liam wondered why he had waited to introduce himself.
“Well, everything is in order here. I’m heading out.” Joaquin strode for the door and was gone.
I hope this isn’t the beginning of some issue with the Emet Sodit. We need their help.

I CAN'T STRESS ENOUGH HOW MUCH YOU WILL LOVE THIS BOOK!! I SURE DID! HERE IS AN AUTHOR BIO AND LINKS: CHECK IT OUT!!
Author Bio 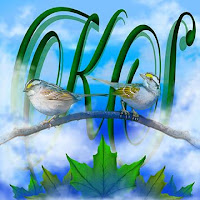 Kathryn Sparrow has had stories spinning around in her head her whole life and finally decided it was time to write them down. For twenty years, she worked in the Software Industry as a Software Quality Engineer, so she gets a particular thrill including geeks in her stories. Now, she is a stay-home mom although she thinks that’s a terrible name for the job since she spends so much time driving her kids to their various activities. She lives in Massachusetts with her geek husband and adorable, infuriating daughters, who are too smart for their Mommy’s own good. If she had spare time she would spend it knitting, crocheting, cross stitching, and doing any other handicrafts that caught her fancy.

THANKS SO MUCH FOR JOINING ME FOR MY BLOG TOUR STOP OF ALPHA CODER, AND THANK YOU KATHRYN SPARROW, FOR SUCH A WONDERFUL BOOK THAT HAS ME WANTING BOOK 2 RIGHT NOW <3 i="">

at September 25, 2015
Email ThisBlogThis!Share to TwitterShare to FacebookShare to Pinterest