HEY FRIENDS, IF YOU REMEMBER I FELL ALL OVER THE FIRST BOOK IN THE 'IN MY HEART' NOVELLA SERIES BY JOE COSENTINO, AN INFATUATION, WELL I AM HERE TODAY TO PROMO BOOK 2 IN THIS SERIES, I HAVE THE COVER, BLURB, LINK, AND AN EXCERPT OF 'A SHOOTING STAR' THIS BOOK RELEASES ON SEPT. 2, YOU CAN PRE-ORDER NOW IF YOU LIKE! LET'S GET TO IT: 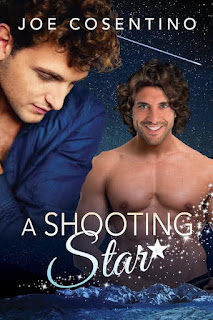 WHAT A GREAT COVER RIGHT? HERE IS THE BLURB!


On the eve of the best night of his life, winning an Academy Award, Jonathan Bello thinks back to his one great love, David Star. Flipping back the pages of time, Jonathan recalls his handsome, muscular, and charismatic college roommate. Since Jonathan was a freshman and David a senior in the Theatre Department, David took Jonathan under his wing and molded him, not only as an actor but as a lover. With every wonderful new adventure, David left his joyful mark on anyone with whom they came in contact, but Jonathan soon uncovered David’s dark past, leading to a shocking event. Undaunted, Jonathan celebrates the captivating man who will always hold a special place in his heart.

A Bittersweet Dreams title: It's an unfortunate truth: love doesn't always conquer all. Regardless of its strength, sometimes fate intervenes, tragedy strikes, or forces conspire against it. These stories of romance do not offer a traditional happy ending, but the strong and enduring love will still touch your heart and maybe move you to tears.

I AM GETTING THE TISSUES READY, CAUSE I KNOW I WILL NEED EM! I DID FOR AN INFATUATION, BUT IT WAS A LOVELY STORY AND I LOVED IT! HERE IS THE LINK TO MY REVIEW OF THAT ONE SO IF YOU DON'T HAVE IT, YOU CAN GET CAUGHT UP ON THE SERIES BEFORE THIS ONE COMES OUT:

NOW FOR THE PRE- ORDER LINK TO A SHOOTING STAR:


IT RAINED on every first in my life: my baptism (so I’m told), starting kindergarten, beginning high school, opening night of my high school senior play, and my first day at college. With stars in my eyes to match the stars in the sky, I had flown from Pennsylvania to Colorado. My luggage was packed with more acting books than clothes, and my pockets were stuffed with food (courtesy of my mother) and cash (courtesy of my father).


After sitting through all-day orientation meetings in the college’s gymnasium, I purchased my textbooks in the college bookstore, then walked to my new home—in the rain.


In case you haven’t figured it out yet, to my parents’ horror, my friends’ confusion, and my delight, I was a theater major. Since I was a walking calculator, my parents assumed I would become an accountant like the other men in my family. Since I won most of my high school competitions, my gymnastics coach and team members assumed I would be the next Mitch Gaylord (no pun intended). However, after starring in my senior play as the Frog in The Frog and the Toad (at least I got top billing), I had a terminal case of show business bug bite.


It was such a traumatic time for everyone in my life that finding out I was gay elicited this surprisingly uneventful response, “That’s nice, Johnny.”


As for the theater major issue, we’re Italian—we rant and rave into our pasta, then get over things quickly. So after seeing me play Stanley Kowalski (of the ripped T-shirt) in A Streetcar Named Desire at our local summer theater, everyone in the neighborhood proclaimed me the next John Travolta and wished me well in college.


The college was only fifteen years old, so it was modern in design. A tall iron gate opened to a winding road leading to the various academic buildings. Each building was circular, triangular, rectangular, or square, reminding me of a child’s play set. A small but well-kept lawn, sporting benches and lampposts, was stationed between each building.


I made my way to my room on the third floor of the men’s wing. It was the usual college dorm room—like a prison cell in double vision. The bed, bureau, bookshelf, closet, desk, and chair on one side of the room were replicated on the other. The window looked out onto enormous jagged mountains like a painted flat over a sky-blue cyclorama. (I told you I was a theater major.)


I dried off, quickly unpacked, then changed into jeans and my newly purchased college sweatshirt. Somewhat muscular from my high school gymnastics, I decided baggy clothes would help me fit in with what I assumed would be the skinny or overweight theater nerds. They’re the kids who spend all their time indoors listening to Broadway show tunes, talking about the true meaning of Sondheim’s lyrics, arguing if Rent, Les Mis, or Phantom is the best musical, and reading every play from William Shakespeare to Neil Simon.


Since my chestnut hair frizzed from the rain, I was happy my mother packed my blow dryer. As I got to work on my hair, I was surprised at how nervous I felt about attending my classes and auditioning for my first college production. Being shy by nature, I was also anxious about meeting my professors, the other theater majors, and of course my roommate.


As an Italian-American, I subscribed to my mother’s theory that if someone doesn’t want you to see something, he will hide it in a locked vault covered with cement. So I inadvertently took a quick look at my roommate’s things on the other side of the room. He was incredibly neat. Numerous theater textbooks and play scripts lined his bookshelf in alphabetical order. The bulletin board above his desk displayed artistically arranged programs from various comedy, drama, and musical college productions listing the same male lead in each show: “David Star”.


“Do you always look at other people’s things?”


I nearly got whiplash as he entered the room.

I CAN'T WAIT, I WILL BE BACK ON RELEASE DAY WITH MY REVIEW! HERE IS A BIO ON JOE AND HIS SOCIAL LINKS:

Joe Cosentino is the author of An Infatuation and A Shooting Star (Dreamspinner Press), Paper Doll the first Jana Lane mystery (Whiskey Creek Press), Drama Queen the first Nicky and Noah mystery (Lethe Press), and The Nutcracker and the Mouse King (Eldridge Plays and Musicals). He has appeared in principal acting roles in film, television, and theatre, opposite stars such as Bruce Willis, Rosie O’Donnell, Nathan Lane, Holland Taylor, and Jason Robards. His one-act plays, Infatuation and Neighbor, were performed in New York City. He wrote The Perils of Pauline educational film (Prentice Hall Publishers). Joe is currently Head of the Department/Professor at a college in upstate New York, and is happily married. His upcoming novels are A Home for the Holidays (Dreamspinner Press holiday novella), The Naked Prince and Other Tales from Fairyland (Dreamspinner Press short stories novella), Porcelain Doll the second Jana Lane mystery (Wild Rose Press), and Drama Muscle the second Nicky and Noah mystery (Lethe Press).

HOW COOL IS THIS BIO! THANKS FOR JOINING ME FOR THIS PROMO POST! SEE YOU ON RELEASE DAY!!

at August 07, 2015
Email ThisBlogThis!Share to TwitterShare to FacebookShare to Pinterest