OMG FRIENDS, I HAVE BEEN LOOKING SO FORWARD TO THIS ONE!! ONLY A MONTH TILL RELEASE DAY, AUGUST 3RD! ( WE HAVE BEEN WAITING THIS LONG, A MONTH WON'T TOTALLY KILL US ;P), KNAVE OF BROKEN HEARTS, THE FOLLOWUP TO THE OH SO WONDERFUL KNIGHT OF OCEAN AVENUE, IS GONNA BE AWESOME I KNOW! I HAVE THE BLURB, THE LOVELY COVER, DREAMSPINNER PRE-ORDER LINK, AN EXCERPT AND EVEN AN AUTHOR BIO AND LINKS FOR YA, SO LET'S GET GOIN!! 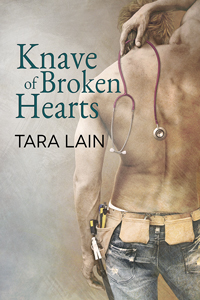 ISN'T IT BEAUTIFUL? I LOVE IT: HERE IS THE BLURB:

Jim Carney has a full time job—running from himself. Since he walked out on his wealthy family at sixteen because he’d wrecked his best friend’s life over some yaoi graphic novels, Jim has lived a macho, blue-collar existence of too much booze and too little responsibility. Then Billy Ballew, the man Jim most admires, gives Jim a chance to come through as his construction supervisor. For once, Jim is determined to make someone proud. Then Jim goes in for a physical for his new job, and his yaoi dream comes to life in the form of cardiologist Ken Tanaka. Jim discovers he has two heart problems—a wonky mitral valve and a serious attraction to his doctor. But Ken is a major player, and Jim might be just a notch on the doc's stethoscope. To Ken, Jim is unforgettable—but the living embodiment of his traditional family’s worst nightmares. How come the minute Jim decides to be responsible, he finds himself taking care of his kid brother, getting a proposal from a wealthy woman, making a deal with the devil, and winding up in the hospital—when all he really wants is the Knave of Broken Hearts?

OMG! THIS IS GONNA BE SO GOOD RIGHT? EEEPP, CAN'T WAIT TO READ IT!! HERE ARE THE DREAMSPINNER PRE-ORDER LINKS!

GRAB THIS ONE RIGHT NOW FRIENDS, YOU WILL BE SO GLAD YOU DID! NOW FOR AN EXCERPT:

The line for the bars had shortened as people gathered to dance with the grooms, so Jim made it to the bartender pretty quick. He popped a couple of bucks into the tip jar and carried one soda bottle and two beers toward the table. Somebody cat-called, and he glanced up in time to see Shaz spin and dip some blond guy. He laughed along with most of the spectators.
Jim took one more step. His foot caught on the edge of the wood dance floor, the slippery shoe slid, and—whoa! He stumbled forward, his arms flailing. Beer sloshed in a big gold arc. Shit, the tux! He raised the bottles high in front of him to keep the beer away, slid into a half circle, and timbered toward the floor face-first. “Damn!”
Strong hands grabbed him from behind and he twirled into a tight, warm embrace, his feet tangling but his body upright. “Got you.”
“What? Jesus!” He tried to twist his feet back and lurched again, but the hands held. Finally Jim planted himself steadily and looked up into eyes so shiny black they practically reflected his face. Wide and almond-shaped. Yaoi man. Hellfire. About 100 percent more beautiful up close than from a distance. Skin like beige marble, hair like midnight. Eyes straight from his fantasy.
The guy smiled. “How fortuitous. I was just coming to ask you to dance.”
“What?”
Dimples popped out in places where lean hollows had been. “I’d love to dance with you.” Shit if he didn’t just start dancing, holding Jim’s hands, which in turn held the bottles. Dance or fall? That was his position, so he moved his feet. Jesus. He couldn’t resist without spilling the beer down the guy’s expensively dressed back, but every movement rubbed him in places that really needed rubbing and were getting a very embarrassing reaction.
Wake up. “Uh, sorry. I’m, uh, I mean, I don’t normally dance with guys.”
Gorgeous smiled again, and it made Jim want to smile back. “You’re doing fine.”
Sweet Jesus, the guy smelled like something spicy. Grapefruit and cinnamon. Real subtle but sneaky. It kind of tiptoed in Jim’s nose and attacked—lower. “What?”
“The dancing. You’re doing fine.” He spun, holding Jim in his arms gracefully, and for a weird second Jim felt almost graceful too. That didn’t happen often. Between the smell and feel, Jim’s head spun and his heart hammered. His eyes closed on their own. He was floating like some gently moving leaf. Could move this way forever.
The silky voice whispered, “Want to deliver the beer to your friends and be hands free?”
Friends. He dragged his eyes from the man and looked toward the table. Charlie and Raoul stared, full-on, no smiles, amazement written all over their faces. Behind them in line, the women stared too, but they were laughing. Except for Peggy. She looked half pissed. Hell, it was okay for her to dance with gay guys, but not him? What the hell am I thinking? He stopped moving and tried to take a step back out of this person’s arms. Every inch away felt cold.
Mr. Beautiful cocked his head and dimpled again. “Oh dear, he’s come to his senses. Why do all the gorgeous ones have to be straight?”
Gorgeous? “Man, you’ve got some seriously bad taste.”
His face sobered just a little. “Quite the contrary. I’m known for my exceptional discernment.”
What the hell could he say to that? “Thanks for catching me.”
“Any time, dear. Any time.” Yaoi man turned and walked like some jungle cat back onto the dance floor, grabbing a handsome guy from the line as he went. By the time Jim’s heart started beating again, the guy was dancing and laughing with someone else.
Charlie and Raoul both rushed up. Charlie waved a hand toward the beautiful one. “What was that all about?”
Jim frowned. “The guy caught me when I nearly fell flat on my face.” He shoved the beer bottles at Charlie. “Here, take these.”
Raoul grabbed one of the beers. “Looked more like a tango to me, man.”
“Cut me a break. The guy was just joking around.”
Peggy’s voice came from behind him. “Oh, I don’t know. That dude is prettier than me.”
Jim turned and slipped his arm around her. Don’t force me to agree.
Charlie stared out at the dance floor, where pretty-face rested his head against a handsome blond’s shoulder. “Looks like you don’t have to worry, Peg. That dude’s got a guy for every night.”
True, and Jim fucking wished he didn’t feel jealous.

MAN AUGUST 3RD CAN'T GET HERE FAST ENOUGH RIGHT?? ;P, HOW ABOUT SOME SOCIAL LINKS AND A BIO ON TARA! BE SURE TO TELL HER HOW MUCH YOU ARE LOOKING FORWARD TO THE RELEASE OF KNAVE OF BROKEN HEARTS! I KNOW I AM!

Tara Lain writes the Beautiful Boys of Romance in LGBT erotic romance novels that star her unique, charismatic heroes. Her first novel was published in January of 2011 and she’s now somewhere around book 25. Her best-selling novels have garnered awards for Best Series, Best Contemporary Romance, Best Paranormal Romance, Best Ménage, Best LGBT Romance, Best Gay Characters, and Tara has been named Best Writer of the Year in the LRC Awards. In her other job, Tara owns an advertising and public relations firm. She often does workshops on both author promotion and writing craft.  She lives with her soul-mate husband and her soul-mate dog near the sea in California where she sets a lot of her books.  Passionate about diversity, justice, and new experiences, Tara says on her tombstone it will say “Yes”!

THANKS SO MUCH MUCH FOR JOINING ME FOR MY COVER REVEAL AND PROMO POST FOR KNAVE OF BROKEN HEARTS, JOIN ME RELEASE DAY AUGUST 3RD, FOR MY RELEASE DAY REVIEW!

at July 03, 2015
Email ThisBlogThis!Share to TwitterShare to FacebookShare to Pinterest