HEY THERE FRIENDS, I AM SO HAPPY TO BRING YOU SOME INFO ON THE UPCOMING 'KNIGHT OF OCEAN AVENUE' BY TARA LAIN, DUE OUT MAY 1ST! I HAD THE PLEASURE OF READING THIS ONE FOR REVIEW AND IT IS AMAZING! HERE IS A LOOK AT THE COVER, BLURB, AN EXCERPT, AND THE DREAMSPINNER PRESS PRE-ORDER LINK, AS WELL AS SOME INFO ON TARA AND HER SOCIAL LINKS! LET'S TAKE A LOOK:

HERE IS THE COVER BY THE OH SO TALENTED REESE DANTE: 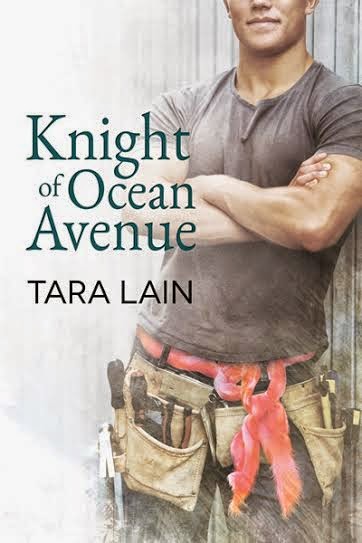 I LOVE THIS COVER! HERE IS THE BLURB:


How can you be twenty-five and not know you’re gay? Billy Ballew runs from that question. A high school dropout, barely able to read until he taught himself, Billy’s life is driven by his need to help support his parents as a construction worker, put his sisters through college, coach his Little League team, and not think about being a three-time loser in the engagement department. Being terrified of taking tests keeps Billy from getting the contractor's license he so desires, and fear of his mother's judgement blinds Billy to what could make him truly happy.
Then, in preparation for his sister’s big wedding, Billy meets Shaz—Chase Phillips—a rising star, celebrity stylist who defines the word gay. To Shaz, Billy embodies everything he’s ever wanted—stalwart, honest, brave—but even if Billy turns out to be gay, he could never endure the censure he’d get for being with a queen like Shaz. How can two men with so little in common find a way to be together? Can the Stylist of the Year end up with the Knight of Ocean Avenue?

YES, IT IS AMAZING AS IT SOUNDS, TRUST ME! THESE MEN WILL WRAP AROUND YOUR HEART AND NOT LET GO! HERE IS THE EXCERPT:

GAGA’S “EDGE of Glory” played in his ear. Damn. Quit. He reached out and pawed at the edge of the coffee table until he finally felt the phone. His fingers found the mute button and he clicked it. Peace. He tried to roll over. Heavy.
“Merwaorwr.” “Mewr.” Claws dug into his chest as the weight lifted, then disappeared. “Go back to sleep.” He rolled over until his face and body were pressed against the back of the couch. Ouch. His dick hurt. Sleep. Ouch.
Well, damn. Slowly he rolled onto his back and stared at the ceiling. He glanced to the side. Clancy and Yerby gazed at him like they could command him with will force alone to open the tuna. “Hang in there, guys.”
Oh man. Not hung over. He’d had half a beer. But here he lay fully clothed on his couch, aching in his bones and feeling like someone had kicked him in the nuts. That would be him. He’d done it to himself.
He swung his legs over the side, sat up on the edge of the couch, and dropped his head. Four eyes stared up at him. “Go open it yourself.”
Three times. He’d wanked himself into oblivion three times while rewinding that frigging porno. Was there one line he didn’t engrave in his brain? Every “unh, unh, unh. Fuck me harder” was emblazoned in his memory. Jesus, Ballew. Yeah, Jesus was the operative word. But if he was going to hell for jerking off, he’d be taking every male in the world with him.
Of course, he didn’t just masturbate; he wanked to gay porn. What the hell is that about? Truth? He’d been kicked in the teeth so many times by so many women, the idea of fucking a nice uncomplicated man kind of did it for him. Well, not seriously, but the theory was attractive. And no, he would not be sharing this revelation with the guys on the job site.
The bang on his door about sent him into outer space. Who the hell? Nobody came here. He didn’t share his address much. No poker with the boys or make-out sessions with the girls. His place. His. Who was it?
The knocking came again.
Shit!
He jumped up. “Yeah?” The cats looked up at his loud voice. “Billy, it’s Jim.” The voice came through the door. Jim. Billy looked around, grabbed the laptop, closed it tight, and slid it onto the end table. Lube. Shit. He shoved the open tube into the drawer, then staggered over to the front door. How much did he smell like sex? Damn, his sweats were halfway to his knees. He dragged them back up, then opened the door. “Hi. Sorry, overslept.” He ran a hand through his hair.
Jim Carney was a little older than him and a good guy, if a bit of a hound dog. He grinned. “Sorry. My truck broke down. I was kind of close to here and remembered your address. Thought I’d see if I could get a ride.”
“Uh, sure.” He glanced over his shoulder. It felt strange having somebody here. “Come on in. I need to feed my cats and take a quick shower, if you want to wait.”
“Sure. Too far to walk and all uphill.” He stepped in. “You have cats?”
Billy looked at Jim. The guy had a tough face with a broken nose that some women liked. “Yeah, I got two. You like cats?”
“No. Just think it’s kind of funny that you do.” He smacked Billy’s shoulder. “You crazy cat lady, you.”
Well, hell. “Make yourself at home.” Kind of. He walked into the kitchen, the boys behind him, and scooped out some cat food into both dishes. “Here ya go, guys.” He raised his voice. “Don’t let feline haters make you feel bad.”
Jim laughed from the living room. “This is quite a place you have. Jesus, man, what are you, some closet decorator?”
Billy frowned and walked into the living room. “No, I just like having a nice place of my own.”
“But you’re so damned neat.” He was holding a glass globe Billy had found in a yard sale.
“So?” He took the globe and put it back on the shelf. “Nothing. No wonder women like you so much.”
“I’m taking a quick shower.” He started for the bedroom, stopped and grabbed the laptop, then went into his room—small with a big bed.
He glanced at his watch, still ticking on his wrist. Double shit. If he didn’t hurry, they’d both be late for work. Saturday shifts were good for making extra cash, but not if he didn’t get there.
He stepped under the water. Too cold. Shaved so fast he nicked himself and finally got some clothes on and hurried back into the living room. Jim sat on the couch holding a book, the two cats staring at him from across the room. He stared back. Billy laughed. “Have they got you cornered?”
“Shit, man, those two are scary. What are they, ninja attack cats?”
Billy sat and pulled on his work boots. He nodded at the book. “What you got?”
Jim held out the book. “This is heavy shit, my man.” The copy of Jane Eyre kind of weighed down his hand.
Billy tried to keep his brows from scrunching together. “I just like to read. I didn’t get to go to school too long, so I read, okay?” He didn’t say he read because it was like a fucking gift to finally be able to do it.
Jim set down the book and stood up. “You really are different, you know?”
“Thanks a shitload.”
“I don’t mean it bad. You’re just—not like most of the guys.”


NOW HERE IS THE DREAMSPINNER PRE-ORDER LINK FOR THE E-BOOK AND PAPERBACK VERSIONS! YOU WILL BE GLAD YOU GOT THIS ONE! :)

HERE IS A LITTLE ABOUT TARA AND HER SOCIAL LINKS: I LOVE THIS AUTHOR AND IF YOU HAVEN'T READ HER, YOU ARE IN FOR A TREAT!

Tara Lain writes the Beautiful Boys of Romance in LGBT erotic romance novels that star her unique, charismatic heroes. Her first novel was published in January of 2011 and she’s now somewhere around book 25. Her best-selling novels have garnered awards for Best Series, Best Contemporary Romance, Best Paranormal Romance, Best Ménage, Best LGBT Romance, Best Gay Characters, and Tara has been named Best Writer of the Year in the LRC Awards. In her other job, Tara owns an advertising and public relations firm. She often does workshops on both author promotion and writing craft. She lives with her soul-mate husband and her soul-mate dog near the sea in California where she sets a lot of her books. Passionate about diversity, justice, and new experiences, Tara says on her tombstone it will say “Yes”!

THANKS SO MUCH FOR JOINING ME FOR AN EARLY LOOK AT 'KNIGHT OF OCEAN AVENUE', SEE YOU BACK HERE ON MAY 1ST FOR MY RELEASE DAY REVIEW!