AN INTRODUCTION TO THE COWBOY GANGSTER:

HELLO FRIENDS! I AM SO EXCITED TO BRING YOU THE FIRST LOOK AT  BOOK ONE OF THE COWBOY GANGSTER SERIES, SHOT THROUGH THE HEART! THIS IS A SPIN-OFF OF THE WILDLY POPULAR PHOENIX CLUB SERIES BY CJ BISHOP (A.M. SNEAD) WE HAVE THE COVER, (THIS IS THE AUTHORS RENDITION AND WON'T BE THE ONE ON THE E BOOKS), THE BLURB AND AN EXCERPT! HERE WE GO: 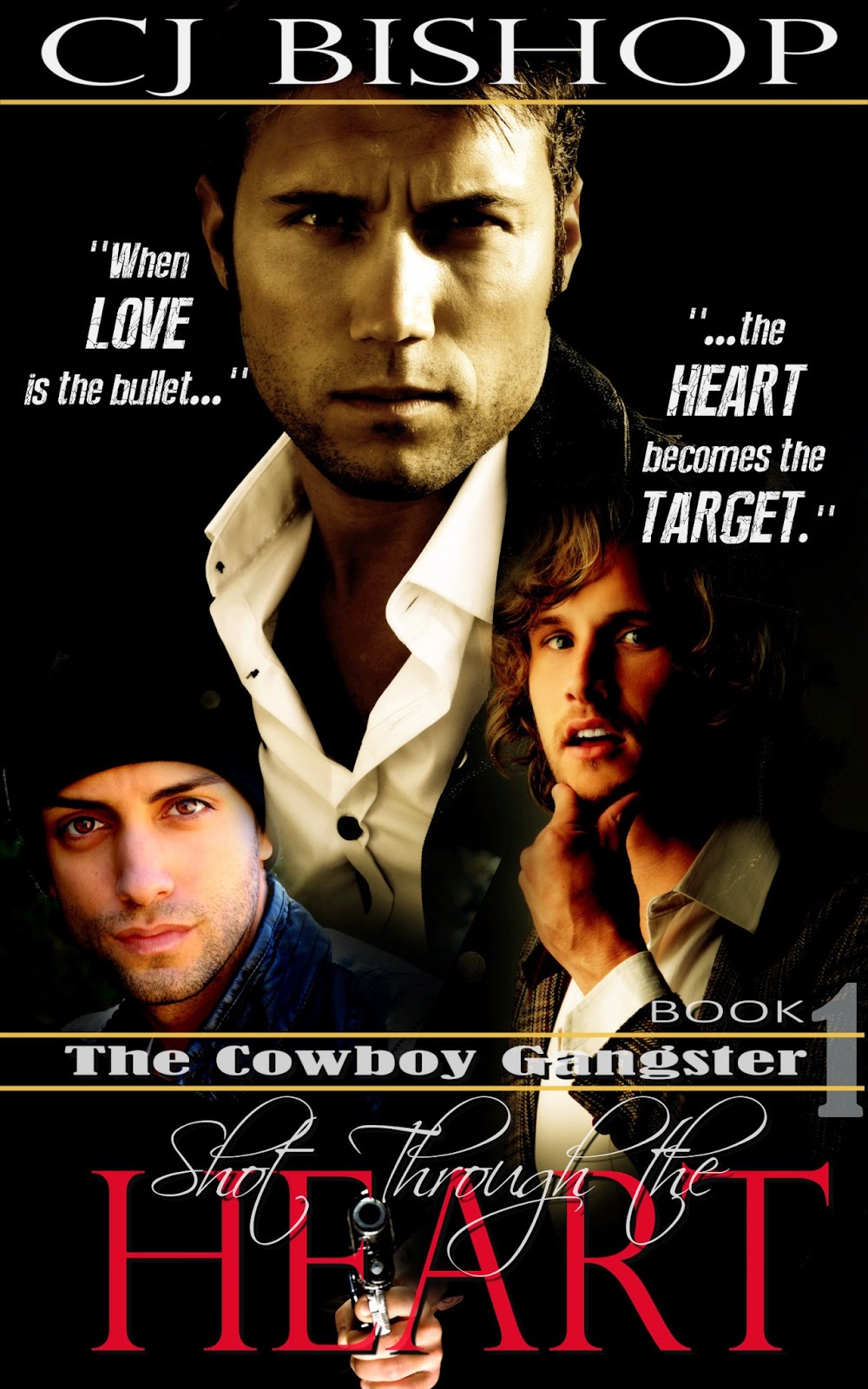 LORD I LOVE THIS COVER! HOW SEXY IS THAT! HERE IS HOPING SHE CAN USE IT FOR THE PRINT VERSION OF THE BOOK! HERE IS THE BLURB:

THE COWBOY GANGSTER (Bk 1): Shot Through The Heart

TAG LINE:  “I was born with a blood-stained soul.”
BLURB:
Clint “The Cowboy” Maddox is a force to be reckoned with. Enforcer for the Sanitini family, the cowboy has known only violence, pain and death. But for a select few he calls “brothers”, Clint feels no love for mankind and believes that “an eye for an eye” is the only true means of retribution. ‘Let the punishment fit the crime’ is his philosophy when dealing with his enemies. But upon meeting Axel Anders –a frightened and lost young man with a stained soul of his own –Clint’s hard-as-steel exterior begins to crack as he finds himself intrigued by the effect this vulnerable “kid” has on him. Yet when Axel’s presence begins to disturb the ground beneath which Clint’s darkest, most painful memories have lain dormant for over two decades, he begins to understand that the young man poses a greater threat than any flesh and blood enemy –and knows he must put the kid out of his life, or face a resurrected past that he believed to be dead and buried. But walking away from Axel and not looking back –proves to be a much greater challenge than he is prepared for.

OH YEAH, THIS IS GONNA BE A GREAT ONE I PROMISE! EVEN IF YOU AREN'T FAMILIAR WITH THE PHOENIX CLUB SERIES (WHICH YOU SHOULD BE ;p ) YOU CAN START HERE WITH CLINT AND AXEL! HERE IS AN EXCERPT:

As the kid slowly turned away from him again, a war broke out inside Clint, his mind and heart battling like ancient warriors. His heart insisted he take Axel in his arms, comfort him, make him understand he was safe with him. His mind countered the course of action, reminding Clint who he was –what he was. And that his presence in Axel’s life would ultimately bring the boy –and himself –to ruin.
You have no business being here…messing with this kid. You got what you wanted –now get the fuck away from him.
Clint twisted his head away from Axel, his gaze turning to the nightstand beside the bed. His eyes rested on the .9 mm lying next to the lamp. The weapon itself was a scream of reality. He stretched out his hand and ran his fingertips over the cool metal of the Beretta, feeling the weight of it even without picking it up. It was a part of him, who he was. An extension of his own hand.
Axel shifted beside him and sniffed, discreetly clearing his throat. Clint looked at him. He hadn’t gotten what he wanted –he still didn’t know why the kid unhinged his mind, knocked his senses off kilter. This boy –abused and broken by life –weak and cowardly by his own admission…remained a mystery to Clint. Had he come upon an abused animal in this state, he would have put it out of its misery –not taken it home and attempted to fix what was broken.
You said you would walk away and not look back once you had him again. So keep to your word and cut him loose.
Sitting forward slowly, Clint looked at the kid again, the faint scar on his back drawing Clint’s stare, holding it. The longer he gazed upon Axel, the more he began to detect remnants of other, less discernable scars reminiscent of the other. How many times had the kid’s dad taken his belt to him?
Because I existed.
He closed his eyes, brow squeezing hard as memories he had thought long dead and buried, tried to claw their way to the surface of his mind. He opened his eyes in hopes of banishing the images, yet they remained –not dead and buried –but merely buried alive as his gaze fell across his own belt, tossed to the floor haphazardly in the heat of passion. The empty, dead eye sockets within the skull buckle stared back at him ominously and he saw again the blood draining through those holes, splattered across the bony face, as the hard buckle struck tender flesh again and again, ripping and tearing…
Clint jerked his eyes from the skull face, unnerved to discover a tremor in his hand as he dragged his palm across his mouth. His unsteady stare turned to Axel once more. Something about the kid disturbed the ground beneath which his memories had been laid to rest. Memories that had no place in his mind anymore, and which only served to weaken and wound.

THIS BOOK WILL BE OUT SOON SO YOU WON'T HAVE TO WAIT TOO LONG! I HAVE INCLUDED THE AUTHORS TWO AUTHOR PAGES SO YOU CAN CHECK OUT HER BOOKS, AND HER A.M. SNEAD FB PAGE, WHICH IS THE IDEAL WAY TO GET IN TOUCH WITH HER!

I AM A HUGE FAN OF THIS AUTHOR AND HAVE READ MOST ALL OF HER WORK, SO TRUST ME WHEN I SAY, YOU WANT TO GET THIS BOOK WHEN IT COMES OUT, SO JOIN ME THE FOR MY REVIEW AND BUY LINKS ON RELEASE DAY! THANKS FOR JOINING ME FOR THIS FIRST LOOK AT WHAT IS MOST ASSUREDLY GOING TO BE AN EPIC SERIES!

at March 30, 2015
Email ThisBlogThis!Share to TwitterShare to FacebookShare to Pinterest