HELLO FRIENDS, I'M HERE WITH A PRE-ORDER PREVIEW OF OPEN NET: CAYUGA COUGARS 2 BY V.L. LOCEY! THE BOOK COMES OUT AUGUST 16TH, AND I CAN'T WAIT FOR YOU GUYS TO READ IT! TO TIED YOU OVER I HAVE THE BLURB, PRE-ORDER LINKS, AND EVEN A NAUGHTY EXCERPT! SO CHECK IT OUT AND PRE-ORDER YOUR COPY TODAY! 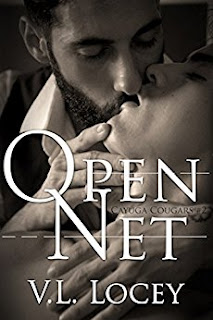 FIRST OFF, HOW HOT IS THIS COVER! YUMMY!!! NOW FOR THE BLURB AND LINKS:

August Miles has the world on a string professionally. Augie, as his friends and teammates call the unassuming young goaltender, is on the fast track to the pros. The starting goalie for the Cayuga Cougars, he has a year or two in Cayuga to hone his skills and all his career dreams will have come true. Pity his personal life isn’t riding the same high. He’s the only one among his group of friends without that special someone to call his own. Until he meets Salvatore Castenada at a lakeside party. The attraction is white-hot and more than a little wonderfully overwhelming for the romantically inexperienced goalie. August quickly discovers that Sal is everything he’s dreamed of in a man: mature, settled, sinfully handsome, and filled with gentle humor. Sal is also HIV positive. Will Sal’s revelation about his status end this budding relationship before it can even begin? Or will the two men be able to handle the challenges life—and a championship run for the Cougars—throws at them?

TRUST ME, YOU GUYS WILL LOVE THIS BOOK AND HOW THIS BRILLIANT AUTHOR DEALS WITH SOME SENSITIVE ISSUES! HERE IS THE EXCERPT I PROMISED: ENJOY!!

Several days later, trying to be nonchalant about things, I stood outside his door, empty container in my hand, features schooled not to reflect how scared I was.
He looked shocked to see me on his doorstep. “Hey,” he said.
I held up the empty dish.
His gaze darted to the container, then back to me, a smile tugging at the corner of his sensual mouth. “Looking for a refill or something more?”
“Both.”
He stepped aside to let me enter. I paused just inside the front door, turning to look at him after he shut it.
“I’d like to have more,” I said, and held out the container like some sort of orphan in a musical.
“More what?” he asked, and I heard the uncertainty in his voice.
“More food and more you.”
“Are you sure, August?”
I nodded.
He gently took the container, his eyes locked with mine. “Are you one hundred percent sure? Maybe you should take more time. I’m not a prime dating candidate for you. I’m seropositive and I’m fifteen years older than you are. I can almost guarantee you that some of your friends are going to be against us seeing each other.”
“I don’t need more time and I don’t need friends who would be so judgmental. Yes, I’m one hundred percent sure. I’ve spent days reading, watching videos, and then reading more. I even talked with a medical professional. I know what I’m going to be facing—what we’re going to be facing.”
He tossed the container onto a small table at the end of the sofa. “We can never have unprotected sex. Ever. Not even once.”
“I know,” I said as want began pumping through my veins.
“If a condom breaks you could get infected.” He stared deep into my eyes.
“I know,” I replied. “I know all the bad things that can happen. I still want to date you.”
“No, you just think you know all the bad things, Aug. There’s so much you don’t know.” He sounded sad and weary.
“Then I’ll learn. Sal, I want to be with you, okay? I mean, if you don’t want to be with me, then that’s fine. I’ll just leave and you’ll never have to look at my dumb face ever—”
Sal stepped up to me without a word and pushed my back against the wall. A shocked grunt escaped me right before his mouth dropped over mine. He ran his tongue over the seam of my mouth. I let him in. He was powerful, possessive and hungry. His tongue slipped around mine as his hands found the edge of my shirt.
Breaking the kiss, he jerked my shirt upward, not caring that it caught under my chin. He just tugged harder to get the neckband free. Once the material popped free, he grabbed the shirt with both hands and held my arms over my head, the soft cotton keeping my hands off him.
“I should tell you to leave now, but I want you too bad to be noble,” he growled.
He captured my mouth again, this time letting his body lean in to me from chest to knees. My fingers slipped out of the T-shirt and I pushed them between his. Sal gyrated against me. His hard cock slid over mine. I sucked in a heated breath. He moaned, then began feasting on my neck, collarbone, and finally a nipple. He slipped his hands out of my grip and his palms, flat to my arms, slowly slithered downward.

YUMMY RIGHT? JUST WAIT TILL YOU READ THE WHOLE THING! IF YOU MISSED BOOK ONE HERE IS THE LINK TO MY REVIEW: YOU WILL LOVE THIS BOOK!!

HERE IS SOME INFO ON VICKY, WHO IS ONE OF MY FAVE PEOPLE!! BE SURE TO USE THOSE LINKS FRIENDS, YOU WILL LOVE HER! 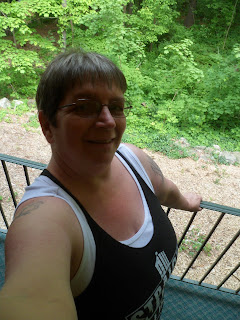 V.L. Locey loves worn jeans, yoga, belly laughs, walking, reading and writing lusty tales, Greek mythology, Dr. Who, Torchwood, the New York Rangers, comic books, and coffee. (Not necessarily in that order.) She shares her life with her husband, her daughter, one dog, two cats, a flock of assorted domestic fowl, and two Jersey steers.
When not writing spicy romances, she enjoys spending her day with her menagerie in the rolling hills of Pennsylvania with a cup of fresh java in hand. She can also be found online on Facebook, Twitter, Pinterest, and GoodReads.

THANKS FOR JOINING ME FOR MY OPEN NET PRE-ORDER PREVIEW: GRAB YOUR COPY TODAY! SEE YOU NEXT TIME GUYS!!

at July 27, 2017
Email ThisBlogThis!Share to TwitterShare to FacebookShare to Pinterest