HELLO FRIENDS, I'M HERE WITH MY BLOG TOUR STOP AND REVIEW OF SHELTER THE SEA, BOOK 2 IN THE ROOSEVELT SERIES BY HEIDI CULLINAN! I AM SO EXCITED TO SHARE THE BOOK INFO, MY REVIEW, AND MUCH MUCH MORE OF THE CONTINUATION OF EMMET AND JEREMEY'S STORY! LET'S GET STARTED!

Available April 18, 2017
The Roosevelt, Book 2
Some heroes wear capes. Some prefer sensory sacks.
Emmet Washington has never let the world define him, even though he, his boyfriend, Jeremey, and his friends aren’t considered “real” adults because of their disabilities. When the State of Iowa restructures its mental health system and puts the independent living facility where they live in jeopardy, Emmet refuses to be forced into substandard, privatized corporate care. With the help of Jeremey and their friends, he starts a local grassroots organization and fights every step of the way.
In addition to navigating his boyfriend’s increased depression and anxiety, Emmet has to make his autistic tics acceptable to politicians and donors, and he wonders if they’re raising awareness or putting their disabilities on display. When their campaign attracts the attention of the opposition’s powerful corporate lobbyist, Emmet relies on his skill with calculations and predictions and trusts he can save the day—for himself, his friends, and everyone with disabilities.
He only hopes there isn't a variable in his formula he’s failed to foresee.
Buy links: Amazon US, Amazon UK,
Barnes & Noble, iTunes, Kobo, Smashwords THIS QUOTE IS SO TRUE, NOT JUST FOR THIS BOOK, BUT FOR EVERYONE!
I was so excited when I found out this book was coming out! Emmet and Jeremey's story was so profound in Carry The Ocean, so I just knew this book was going to be something special, and boy was I right!
This book is so well researched and written that you just sail through it and enjoy every second, and reading it will open your eyes to the nightmare that the Mental Healthcare System could become. Emmet fights for his rights and the rights of Jeremey and their friends, not without obstacles, but always with courage!
You will rejoice and hurt right along with these characters, trust me! You know me, I don't give spoilers, but you guys have got to read this book! It is amazing just like any other book written by this author! 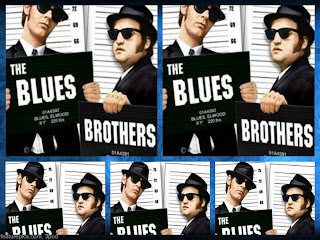 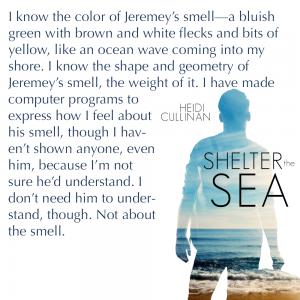 NOW TAKE A LOOK AT WHAT IS COMING UP FOR THIS SERIES: I AM SERIOUSLY EXCITED ABOUT THIS!!

What’s Coming Up Next in the Series

Originally my intent was for The Roosevelt to be a three-book series, with David’s story being second. I struggled to write his story, however, and when I tried to write a short Christmas story for my patrons last year, I realized my problem: Emmet and Jeremey had more to say. I thought perhaps I could get away with writing their continuation as a novella, and at first I tried that. Then their story grew longer, as stories do, and as the mental health crisis in Iowa became worse, I realized there was so much more to say all around.
I think now what will happen is that at the very least there will now be a Roosevelt universe, with Carry the Ocean and Shelter the Sea being books one and two of the Oceans books, and then there being some kind of third book (maybe, finally, a novella or short story?) and then we move on to David. I’m not sure who the third book is about—I thought I knew, but I’ve decided to stop pretending I know what’s going on and simply show up and see what happens as this seems to be the better strategy, as when I drive things only get messed up. Needless to say, there will be more books coming. And more residents moving into The Roosevelt.
THANKS SO MUCH FOR JOINING ME FOR MY SHELTER THE SEA BLOG TOUR STOP AND REVIEW POST! THE BOOK IS OUT TOMORROW SO GRAB IT THEN, AND DON'T FORGET TO ENTER THE RAFFLECOPTER GIVEAWAY BELOW! SEE YOU NEXT TIME FRIENDS! 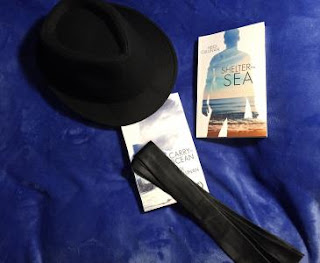 at April 17, 2017
Email ThisBlogThis!Share to TwitterShare to FacebookShare to Pinterest