NOT A LINE OF BULL REVIEW!!

HELLO FRIENDS, HERE IS MY GIRL CLAUDIA'S REVIEW OF NOT A LINE OF BULL, A LOVING NIP 6; BY CHARLIE RICHARDS! I HAVE HER REVIEW AND LINKS FOR THIS ONE, SO LET'S GET STARTED: 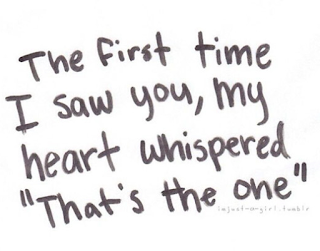 THIS QUOTE IS PERFECT FOR THIS BOOK! HERE IS CLAUDIA'S REVIEW:

Not A Line Of Bull (A Loving Nip 6) by: Charlie Richards
reviewed by: Claudia

Cassium Jones is closing in on his fourth century mark and over the years has held many roles, from farmer to soldier to vampire enforcer. Now, he’s ready to settle down in moderate relaxation…if working a cattle ranch can be considered relaxing. He loves the wide open spaces, the fresh clean air, and even tending the animals. Handling the maintenance and care for the Angus cows in the northern pastures offers plenty of solitude, and he should have been left pretty much alone. Instead, Cassium stumbles upon an injured Angus bull amongst the livestock, and realizes the bull is not only a shifter, but his beloved, his soul mate. Cassium learns Garth has been driven from his herd for disobeying a controlling alpha, leaving behind two young children. While Cassium is happy to help reunite the bull shifter with his kids, is he ready to take on the role of parent when all he wanted was to retire? 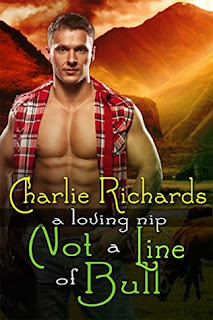 I love this series sooo much!!!
After living for almost 400 years, Cassium gives no thought to finding his “beloved”… after all, he lives in a remote cattle ranch, totally by himself… how could he find his beloved, unless he stumbled upon him? And, that’s exactly how they meet each other!
After refusing to follow his Alpha’s orders, Garth was beaten and had to flee to save his own life. Fortunately, he finds an Angus herd and even injured, he hopes to hide between the cattle, but fate has other plans. As soon as Cassium finds the injured Angus bull he realizes he just found his beloved.  As soon as he gets to know more about his beloved, Cassium is thrilled by him, but first, he needs to figure how to help his beloved to get his kids back and to protect him from his old herd…
Garth knows kindness for the first time when he meets Cassium and he can’t believe in all the things the vampire makes him feel, because it goes against all that he ever heard from his Alpha…  like mates don’t exist, males couldn’t be couples… It’s so sweet to see Garth’s innocence and how awed he is by Cassium’s caring, acceptance, support and protection.   They are perfect for each other and so very hot together!!! 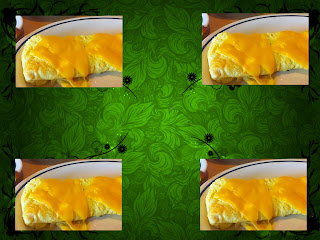 I LOVE THAT CLAUDIA DID THE OMELET RATING, AND I AGREE WITH HER, THIS IS A GREAT BOOK! HERE ARE THE LINKS TO THIS BOOK:

THANKS FOR JOINING ME FOR THIS REVIEW, AND THANKS CLAUDIA, FOR ANOTHER WONDERFUL REVIEW!!