Hey there friends, I have a great book for you today, and I have my friend Jessica Kennedy here to review it for me! I can't wait to share what she thinks about Yummy Indulgences by Andi Anderson! I have her review, links, an excerpt, and even a teaser pic Jess came up with, so let's get going!

I love this quote for this book, here is Jessica's review:


What should have been just another day, ended up changing Allen Garner’s life forever. He’d just finished the night shift as a supervisor at the rendering plant, when his sister gives him a frantic call asking him for a favor to meet with the local baker, Shiloh Ballard, and pick out his parent’s fortieth wedding anniversary cake. Reluctantly roped into doing this chore, when all he wants to do is go home and sleep, Allen is surprised and immediately enchanted by the beautiful baker the moment he lays eyes on him. Shiloh can’t believe a strong, masculine man like Allen would ever be interested in a rainbow flying, petite baker like himself. Immediately sparks fly between them and they are swept up into a whirlwind romance which soon turns into a deep love neither man expected. But there is one problem. Allen hasn’t revealed his sexuality at work and because of this, their relationship must be kept a secret, causing both men to wonder if their relationship is strong enough to survive living together as a couple out and proud. 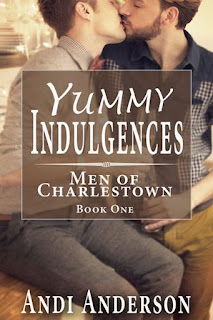 I was asked to read yummy indulgence by Andi Anderson for an honest review. I loved it!! So sweet. Shiloh is an out and proud bakery owner, who makes amazing confections, he meets A.J. a factory worker who comes in to pick his parents anniversary cake and sparks fly instantly!
Allen or A.J. to everyone is semi closeted. His immediate family knows he is gay, but his coworkers do not. They are very bigoted so he keeps quiet, until he meets sweet Shiloh. The man that gives him happiness beyond measure and a reason to walk away from that life.
It's very faced paced with lots of steamy love scenes. The only reason I didn't give it five stars was the insta-love factor which I normally don't enjoy, but did here. It fit well with the flow of the book.
Andi did a great job here and I look forward to more. 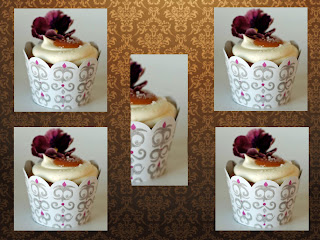 I love this cupcake rating! Here are the buy links for this one!!

Now how about that yummy teaser: Jess outdid herself on this one: 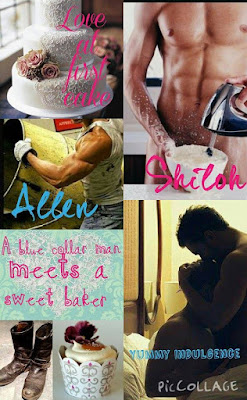 Whew told you it was sweet!!! Now we have an excerpt for you guys!! Enjoy:


Allen pulled his old jeep into the crowded parking lot and grimaced. How in the hell did he get himself into this situation? He had just gotten off the night shift at the rendering plant and was about to go to bed, when his sister, Megan, called and told him his niece was sick with the flu. Apparently, she had made the appointment with the owner of Yummy Indulgences weeks ago and had no intention of canceling it. According to Megan, it was the place in the River Valley to buy special ordered cakes and pastries. He didn’t understand why it was damn urgent to order the cake two months before the party, but Megan had insisted that Yummy Indulgences cakes were the best and had to be ordered several weeks in advance.
After much coaxing and a huge guilt trip later, she convinced him to take her place to do some taste testing and pick a design for the cake. He knew absolutely nothing about throwing a party, much less picking out an anniversary cake for his parents fortieth anniversary party. Knowing his luck, he’d pick out some monstrosity and disappoint his parents, family and friends. Not to mention his sister, who could be a spitfire when she chose to be. Even though he towered over her by at least nine inches and she was tiny enough probably to be blown over by a stiff wind, Megan still scared the hell out of him when she was on one of her terrors. He did not want to have to deal with the wrath of an angry Megan. He’d been there, done that when they were younger and had no intention of ever going through that again.
Allen groaned as he managed to squeeze his faded black jeep into one of the tiny parking spaces and turned off the ignition. He took a deep breath and fought the urge to start it back up and escape this hell that Megan had somehow managed to coax him to do. She had reassured him that the owner, Shiloh, would walk him through everything and that he couldn’t make a mistake, but Allen still wasn’t so sure.
If there was a way to fuck it up. He would most assuredly do it.
Allen opened the squeaky door of his jeep and managed to maneuver his way out of his vehicle without hitting the shiny candy apple red 65 Mustang convertible parked beside him. He let a sigh of relief that the well-loved car had escaped a new dent from his car’s door. All he needed was to damage the classic car and have a pissed off owner jumping down his throat.
He glanced around at the buildings and tried to decipher which of the glass doors was the one he was looking for. His eyes spotted several pots of colorful flowers and a bright rainbow flag hanging out of one of them. The bright colors stood out in the otherwise dull shopping center.
“That’s got to be it,” he mumbled to himself and forced his reluctant feet to walk toward the cheery corner of the building. As he approached, he began to smell the mouthwatering aroma of baked goods, right before he noticed that the window had several elegant cakes displayed from the inside. The gleaming glass door had the words, Yummy Indulgences, painted in a bold array of rainbow colors.
Taking a deep breath, he pulled the door open and heard a tinkling bell chime. The delicious smells coming from the glass pastry cases that were filled with baked goods from cakes to cinnamon buns immediately engulfed him. The fragrant smell made his mouth water and reminded him that he hadn’t eaten since his break at midnight last night.
“Can I help you?” the pretty, plump red headed woman’s cheerful voice called from behind the counter, making Allen relax somewhat. Surely a welcoming voice like that was a sign that this wouldn’t be as bad as he first thought.
He walked up to the counter and gave her his best welcoming smile. “I hope so. My name is AJ Garner. My sister, Megan Warren, had an appointment with Shiloh at ten this morning. She couldn’t make it today, so I’m here instead. I’m supposed to taste test some cakes and pick out an anniversary cake for our parents.”
She smiled at him making her pretty face turn into a beautiful one. “Don’t look so worried, Mr. Garner, we’ll take good care of you. If you will excuse me for a moment, I’ll let Shiloh know that you’re here.”
“You’re not Shiloh?” he asked, raising his eyebrows in surprise.

Yep, you guys know you gotta read this one! Thanks for joining me for this look at Yummy Indulgences, and thanks Jess, for a wonderful review! See you guys next time!

at July 29, 2015
Email ThisBlogThis!Share to TwitterShare to FacebookShare to Pinterest