HELLO FRIENDS, AND HAPPY WEEKEND! I HAVE A GREAT BOOK FOR YOU TODAY! HERE IS MY RELEASE DAY REVIEW OF DRAMA QUEEN BY JOE COSENTINO, AND BOY IS IT GREAT! I HAVE THE REVIEW, LINKS, AN EXCERPT, AND AN AUTHOR BIO AND LINKS, SO LET'S GET TO IT: 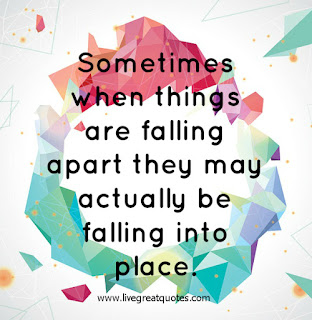 SO TRUE IN THIS CASE! HERE IS MY REVIEW:


Drama Queen (A Nicky and Noah Mystery) by: Joe Cosentino
reviewed by: Becky


It could be curtains for college theatre professor Nicky Abbondanza. With dead bodies popping up all over campus, Nicky must use his drama skills to figure out who is playing the role of murderer before it is lights out for Nicky and his colleagues. Complicating matters is Nicky's huge crush on Noah Oliver, a gorgeous assistant professor in his department, who may or may not be involved with a cocky graduate assistant...and is also the top suspect for the murders! You will be applauding and shouting Bravo for Joe Cosentino's fast-paced, side-splittingly funny, edge-of-your-seat, delightfully entertaining novel. Curtain up! 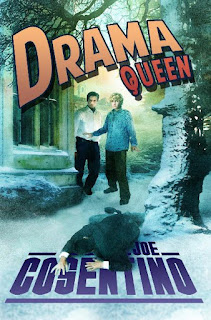 I love a mystery, but only when it is done right, and this one is certainly done right! Joe Cosentino gives us a great storyline, and a plot that keeps us guessing to the end!

Nicky is a collage drama professor who, when we meet him, has had his 35th birthday (he might kill me for telling his age ;p), shortly after meeting him things begin to happen, bad things, deadly things! I love how right when we think we have it figured out, nope not even close!

Nicky has been crushing on assistant Professor Noah since he met him, and Noah just might feel the same way, but in the middle of a murder investigation, one that points the finger at Noah, isn't really the best time for romance, is it?

I love love love that humor plays a huge part in this book, and you will have more than one giggle trust me! You will be rooting for Nicky and Noah all the way, and you will be playing amateur sleuth if you want to or not :P!

I won't do spoilers so all I can tell you is that you have to read this one, you will laugh and at the end you will not know what hit you! Thanks Joe, for the start of a mystery series that is gonna be a great one! 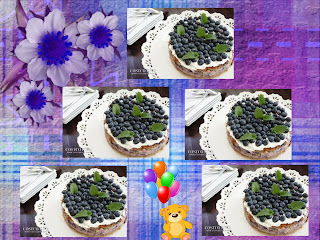 I DID THIS RATING IN HONOR OF AN AWESOME BIRTHDAY CAKE! HERE ARE THE BUY LINKS:

GRAB THIS ONE FRIENDS! HERE IS AN EXCERPT:

“Any notes for me, professor?” Paul Amour, my leading man, sat front row center and winked at me. Identifying as bisexual, Paul uses his charms with men and women alike to get their attention. Tall with shiny, wavy black hair climbing down his neck, chiseled features, and a body like a Greek god, getting attention wasn’t too difficult for Paul. “You were like terrific tonight, Paul. I really believed you were like the murderer!” Ricky Gonzalez, Paul’s co-star and last onstage murder victim, sat next to Paul like an art dealer admiring the Mona Lisa. Ricky is shorter and darker than Paul with a smaller but equally cut physique. After he graduates from college and gets over his crush on Paul, Ricky will no doubt make some guy a wonderful husband.

“Thanks, Ricky.” Paul squeezed one of Ricky’s abdominal muscles. Ricky beamed like a floodlight. Kayla Calloway and Jan Annondale, who play murder victims one and two in the play, sat on the other side of Paul to reward their peripheral visions. Zaftig, giggly, and insecure, they hung on Paul’s every word, wishing they could hang on Paul. “Your fight scenes were totally awesome tonight, Paul,” said Kayla. Jan added, “And you really like aced your cool monologue at the end of the play.” Before Paul could sign autographs, I said, “I have five more pages of notes tonight, people. Can I have everyone’s attention?” As the cast members groaned I noticed that Noah and Scotty had left the theatre (to have a quickie in the lobby?).

The students listened while I gave notes for improvement on their diction, movements, timing, reacting on stage (or lack thereof), character development, and emotional levels. After my last note, the students presented me with a blueberry cheesecake (thanks to the organic dairy farm bordering the college), singing “Happy Birthday” in JOE COSENTINO 5 four-part harmony (the lesbians at the lower notes and the gay men hitting the high notes). I was filled with gratitude until I noticed the thirty-five candles on top of the cake (obviously leaked to my students by Eve Harrington, my graduate assistant Scotty Bruno)

I NEED A BIRTHDAY CAKE LIKE THAT :) HERE IS JOE'S BIO AND SOME SOCIAL LINKS:

Joe Cosentino is the author of An Infatuation (Dreamspinner Press), Paper Doll the first Jana Lane mystery (Whiskey Creek Press), and The Nutcracker and the Mouse King (Eldridge Plays and Musicals). He has appeared in principal acting roles in film, television, and theatre, opposite stars such as Bruce Willis, Rosie O’Donnell, Nathan Lane, Holland Taylor, and Jason Robards. His one-act plays, Infatuation and Neighbor, were performed in New York City. He wrote The Perils of Paulineeducational film (Prentice Hall Publishers). Joe is currently Head of the Department/Professor at a college in upstate New York, and is happily married. His upcoming novels are Drama Muscle the second Nicky and Noah mystery (Lethe Press), A Shooting Star (Dreamspinner Press novella), A Home for the Holidays (Dreamspinner Press holiday novella), and Porcelain Doll the second Jana Lane mystery.

GRAB DRAMA QUEEN FRIENDS, YOU WILL BE SO GLAD YOU DID!

* This disclaimer was added 9/9/15, just a note from Joe if you have purchased a recent copy of the ebook from amazon


Due to a technical error, for a short period of time some people who purchased from Amazon the Kindle version of DRAMA QUEEN, the first Nicky and Noah mystery by Joe Cosentino published by Lethe Press, did not receive the entire ebook. If this happened to you, our sincere apologies. The problem has been corrected. Please update your Kindle file and you will have the entire book. If you have a problem, please contact me at: http://www.JoeCosentino.weebly.com. If you purchased it on Amazon and returned it for refund, please purchase it again and enjoy the full book! The paperback and audiobook were not affected by this technical error. Thank you! Joe Cosentino