HELLO FRIENDS, I AM SO EXCITED TO FINALLY BE ABLE TO BRING YOU THE RELEASE REVIEW OF THE SUMMER HOUSE, DO YOU KNOW HOW HARD IT IS NOT TO TALK ABOUT A BOOK THIS GOOD? ;P, I HAVE MY REVIEW, THE SALES LINK, A SHORT EXCERPT, AUTHOR BIO AND LINKS, AND A RAFFLECOPTER GIVEAWAY! HERE WE GO: 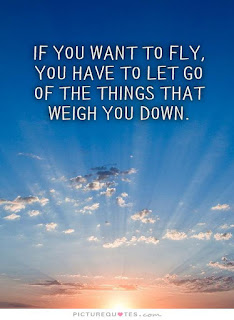 I LOVE THIS QUOTE, AND IT IS PERFECT FOR CONNOR! HERE IS MY REVIEW:

Ashby Sebastian Sterling-Haynes has had a lot of boyfriends, but he's never found the one.

The only person he can form an attachment to is his fourteen year old niece, and even that is in jeopardy when babysitting her cat goes all kinds of wrong.

Veterinarian, Connor Lawson is much happier working with animals than with people. He has deliberately returned home and to the Summer House he recalled from childhood holidays for peace and quiet and the chance to heal from wounds no one would ever see.

When his next door neighbor comes into the practice with a cat that has been in a fight he hides in his office because this Ashby guy is all kinds of dangerous. Too hot, too rich, too titled, and way too sexy for his own good.

Can two men who refuse to believe in love ever learn that love is the easy part of the journey to forever? 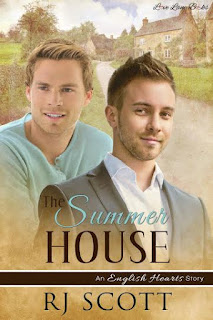 I am a huge fan of Rj Scott, and this book enforces the reason why! It takes a heck of an author to be able to pull you into more than one storyline in a book, yet still put the main focus on the main characters, and Rj does this brilliantly!

I love Ash, poor thing he has no clue what is about to hit him! A notorious playboy, Ash is gobsmacked when his attraction to vet Connor is more than he has ever felt before. When he is entrusted with his beloved nieces cat and things go awry quite quickly, he has a chance to see Connor again.

Connor is pretty closed off to the world, and prefers the company of the animals he treats, and his best friend Rachel. There is a reason for this and because of that he has a hard time believe Ash is really sincere in his pursuit.

These two men have a lot to work on, but it will be worth it for them both! This book is wonderful, and I fell in love with it from the start. Though it is not without its heartbreaks, this is a story that was just aching to be told, and I am so glad Rj was the one to tell it! 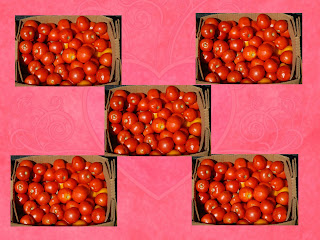 the 5 boxes of summer tomatoes rating

I DID THIS RATING PIC IN HONOR OF SWEET MICK :*)! HERE IS THE SALES AND GOODREADS LINK:

THE BUY LINKS FOR THE BOOK CAN BE FOUND AT THIS LINK:

HERE IS THE GOODREADS LINKS FOR YA:

NOW FOR AN EXCERPT THAT WILL EXPLAIN THE TOMATO RATING ;P:

The drive out of the village was a slow one, caught as he was behind a tractor that appeared to be ambling all over the road avoiding bumps and dips and a trail of cars in its wake. Ash was content to follow at a distance, humming along to the Muse CD he’d found in the glovebox and inhaling the scent of fresh ripe summer tomatoes with each breath. Summer. He loved it.

The tractor turned off just before Upper Fordham, passing the old school house and disappearing down a farm track, but Ash didn’t really speed after that. He had no one behind him and all the time in the world. Yes he had emails to answer, spreadsheets to check, and that godawful decision he’d made hanging over his head, but Tux was going to be okay. At least he could tell Stephanie everything was okay without bald-faced lying. And he’d had a kiss from a gorgeous, albeit reluctant, then shocked, man. He stopped to let someone cross the road from the post box to the bus stop, and they exchanged waves. He didn’t recognise the woman in the bright orange T but the wave was nice. She was probably from one of the rental cottages in the village. Rented by the week, at least four of the estate properties garnered income from people wanting a holiday in the Cotswolds.

He parked outside the Davenport house, right opposite The Wychwood pub, and considered whether he should have actually gone home first to get a new shirt. The house was still decorated from the wedding, he recalled guests spilling from the pub into the house where Chloe’s parents lived. Was that before or after I had Connor basically implying I was a shallow arsehole? Picking up the box, he wandered around the side of the beautiful stone house and down the long drive to the workshops at the end. This was where Richard Davenport had his kitchenfitting business, alongside his wife who pickled and poached and wrapped everything up as Cotswold produce to sell in town. A regular village concern the two had going. He’d seen them at the wedding, but before that Ash hadn’t been back to the estate in over a year. It would be good to catch up.

“Ash!” Mary swept him up in a fragrant hug and held him as close as she could with him carrying the box of tomatoes. “What are you doing here?” “Mick asked me to bring up these to you.” He handed her the box and watched her face light up. She inhaled the scent of them and grinned in delight.

SEE I HAD A REASON FOR THE TOMATO'S (WHICH NOW I WANT, GREAT ;P)
HERE IS SOME INFO ON RJ AND HER LINKS:

RJ Scott has been writing since age six, when she was made to stay in at lunchtime for an infraction involving cookies. She was told to write a story and two sides of paper about a trapped princess later, a lover of writing was born.

As an avid reader herself, she can be found reading anything from thrillers to sci-fi to horror. However, her first real true love will always be the world of romance where she takes cowboys, bodyguards, firemen and billionaires (to name a few) and writes dramatic and romantic stories of love and passion between these men.

With over seventy titles to her name and counting, she is the author of the award winning book, The Christmas Throwaway. She is also known for the Texas series charting the lives of Riley and Jack, and the Sanctuary series following the work of the Sanctuary Foundation and the people it protects.

Her goal is to write stories with a heart of romance, a troubled road to reach happiness, and most importantly, that hint of a happily ever after.

HOW BOUT A GIVEAWAY FRIENDS? CLICK ON THE RAFFLECOPTER PIC BELOW TO ENTER TO WIN A $ 15.00 GIFT CARD! GOOD LUCK FRIENDS:

THANKS FOR JOINING ME FOR MY REVIEW OF THE SUMMER HOUSE TODAY, YOU GOTTA GRAB IT FRIENDS! HAVE A GREAT WEEKEND!

at May 29, 2015
Email ThisBlogThis!Share to TwitterShare to FacebookShare to Pinterest