HI MY FRIENDS! BOY AM I EXCITED ABOUT THIS NEXT BOOK, COMING CLEAN BY SILVIA VIOLET IS AN EPIC READ AND I CAN'T WAIT TO BRING YOU MY RELEASE DAY REVIEW ON MAY 20TH, BUT FOR NOW I HAVE THE BLURB, COVER, PRE-ORDER LINKS, AND EVEN AN EXCERPT! HERE WE GO!!


An unexpected inheritance lands Jeremy a large house and plenty of money to take a sabbatical from his job teaching poetry at a small college. He intends to sell the house and take off on a new path to discover what he wants out of life. Then he meets Connor. The attraction he feels to a man so different from himself is no less shocking than his change in financial circumstances, but Connor is in the closet and Jeremy wants a life lived out in the sun.


Connor is a former Force Recon Marine who runs a housecleaning business. When he’s hired to get Jeremy’s house market-ready, he’s startled by how attracted he is to his client despite their many differences. But his past, especially his final mission, weighs heavily on him. He’s not certain he can be the man Jeremy needs, but no man has ever made him want to take a risk like Jeremy does. 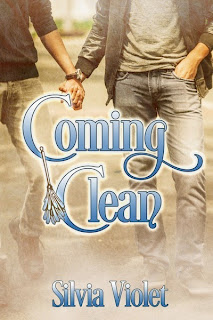 Knock! Knock!Shit! Someone was at the door. Jeremy had been certain he could finish breakfast before the cleaners came but here he was, covered in toast crumbs and only halfway through his eggs. He gulped down a last sip of coffee as he brushed himself with the other hand. Then he ran toward the front door, not wanting to keep the man with the alluring voice waiting. Unfortunately, he’d forgotten how slick the hardwood floors were. He tried to slow himself but it was too late: he went into a uncontrolled skid and landed against the door with a bone-jarring thud.“I thought I was supposed to be the one knocking,” the man on the other side said, his voice just as low and rich as it had been on the phone.Jeremy wished he hadn’t made an utter fool of himself in front of Mr. Sexy Voice. With a sigh, he opened the door. “Sorry. The floor’s slippery, especially if you’re…” He glanced down. Fuck. He was wearing his neon paisley socks, the ones David had given him last Christmas in an effort to brighten up his life. He’d really meant to change. Frayed khaki shorts and paisley socks. Yeah, that was a great first impression.He looked up and for the first time, really saw the man on the other side of the door, Connor, he’d said his name was. Damn, Connor could wear paisley socks, or anything else, and still make a good impression. Better yet, he could wear nothing at all. His light brown hair was buzzed, emphasizing the firm line of his jaw, and his eyes looked like burnished gold. While he wasn’t significantly taller than Jeremy’s five foot eleven, he held himself in a way that made him seem much larger, and he exuded confidence. No doubt he’d be a good man to have on your side in a zombie apocalypse.“You are Jeremy Parks, right?”Please let me get through this interview without embarrassing myself. Again. “Yes, and you’re Spit Shine Clean. Not that that’s your name but—”“I’m Connor.” The amazing specimen of maleness held out his hand. Jeremy hoped to God there wasn’t any egg or jam on his own as he reached out to shake.Whoa. Connor’s strength and the rough maleness of his hand paralyzed Jeremy as if Connor had hit him with a Taser. Jeremy didn’t usually go for the military type. He was more likely to be uneasy around them than turned on. Maybe his wires were crossed that morning or maybe he’d rattled something loose when he hit the door, because he wanted to drag Connor up to his bedroom and forget about showing him the rest of the house. When Connor let go, Jeremy steadied himself, sure he was going to slide down again.“You okay?” Connor asked.“Oh, yes. I’m fine. Just… I meant to change. These socks were a gift. A gag gift.”“They’re cute.” Jeremy glanced at Connor and the surprise in his eyes indicated he was as startled as Jeremy that those words had come out of his mouth. “Thanks. My friend has an interesting sense of humor.”Connor grinned. “I can tell."

LAST BUT CERTAINLY NOT LEAST: HERE IS A BIT ABOUT SILVIA! I LOVE HER BOOKS, AND THIS ONE IS NO EXCEPTION!

Silvia writes erotic romance in a variety of genres including sci fi, paranormal, and historical. She can often be found haunting coffee shops looking for the darkest, strongest cup of coffee she can find. Once equipped with the needed fuel, she can happily sit for hours pounding away at her laptop. Silvia typically leaves home disguised as a suburban stay-at-home-mom, and other coffee shop patrons tend to ask her hilarious questions like “Do you write children’s books?” She loves watching the looks on their faces when they learn what she’s actually up to. When not writing, Silvia enjoys baking sinful treats, exploring new styles of cooking, and reading children’s books to her wickedly smart offspring.

YOU GOTTA GET THIS ONE PEOPLE, PRE-ORDER TODAY, YOU WON'T BE SORRY! THANKS FOR JOINING ME FOR THIS PROMO POST!

at May 12, 2015
Email ThisBlogThis!Share to TwitterShare to FacebookShare to Pinterest