With their impending scene fast approaching, both Jack and Garrett are having second thoughts about the shoot - the memory of the "promo" piece still fresh and painful. Lucas seeks to figure out Bailey's evasive behavior while Mickey's fear for Marcus' safety becomes more visible to those around him. Scotty finds himself trapped in the clutches of a dangerous man he can't break away from -emotionally or sexually. Ultimately, Gideon is faced with a decision that could forever sever his bond with one of his boys, breaking both their hearts, and seeks comfort from the painful choice in the arms of a trusted friend.

IF YOU THOUGHT THE OTHER BOOKS TORE YOUR HEART OUT, HOLD ONTO YOUR HATS FRIENDS, THIS ONE WILL JUST ABOUT DO YOU IN! 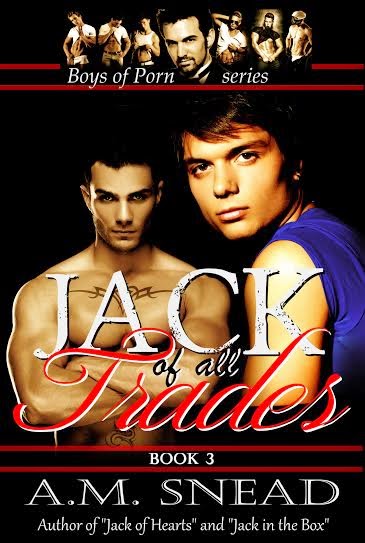 I LOVE THIS COVER, I COULD STARE AT IT FOR HOURS ( I WILL NEITHER CONFIRM OR DENY THAT I HAVE ;P )

Basic human decency. Jack wondered where his parents were the day God handed that one out. Probably at some rally advocating the excommunication of gays from the human race. Jack twisted back toward the bar and finished off his beer. It took too much effort to avoid looking at Garrett, and after just minutes, it felt like it became obvious to everyone around him that he was deliberately not looking at the guy. And the new kid – Benjamin –his steady gaze made Jack uncomfortable. He didn’t care for the notion that someone was seeing more than they should when they looked in his eyes. And this kid gave off that vibe.
Was he sizing Jack up? Trying to determine if Jack was a threat should the kid decide he wanted to make a play for Garrett? No worries, little buddy, he’s all yours. Good luck not getting fucked over like me and Scotty.
The coarse thought didn’t set well, though Jack didn’t really know why. The last thing he should feel is “guilty” about having such hard thoughts toward the man. Jack slid his fingers through his hair and closed his eyes. If he had any luck at all, the others would connect his dejected mood to the impending arrival of his parents.
“While you’re both here,” Gideon spoke up and bumped Jack’s arm, drawing his stare. “I wanted to let you know I’ve rescheduled your scene for the day after tomorrow.”
Jack frowned, his pulse quickening. “I thought we were doing the ‘Friends’ shoot first?”
“We were,” Gideon said. “But Zachary had some unexpected family stuff to deal with, so I’ve postponed the shoot a few days. So you and Garrett are up next.” Gideon held his unsteady eyes. “Unless you’ve decided not to do it.”
Jack could back out. It wasn’t as if Gideon would fire him. But refusing to do the scene would only inflate Garrett’s ego, convince him that Jack was afraid to be sexual with him again because he still harbored feelings for him.
Is that what Garrett thinks –or what you know to be true?
“No, I’m good to go,” Jack muttered. “But you may want to double check with Garrett. He may not be up for it.” Jack had no idea why he added that last bit. To annoy Garrett? He wasn’t clear.
“Set it up,” Garrett said stiffly. “Unlike some, I know how to conduct myself in a professional manner on set –and not get caught up in the illusion of the scene.”
Jack slid off the stool and without looking at the guy, muttered –“Fuck off” –and walked out of the club, in need of some air –and distance between him and Garrett.
As soon as his back hit the outside wall of the club, though, he was assaulted with the memory of Garrett’s strong body pinning him to this exact spot the night they had danced onstage. He squeezed his eyes shut, battling the images…the words…the request made by Jack’s own mouth.
“Come closer.”
“Why?”
“I want to kiss you.”
Jack’s throat knotted and ached. He shoved his head hard against the wall, jaw clenched against the sting burning behind his closed lids.
“I hate you, Garrett North.”
“Why do you hate me?”
“I hate you for making me like you so much…I don’t want to like you this way.”
Warm tears pushed out and rolled down Jack’s face.
“You getting sweet on me, Jack? Thinking you might want to give up your heart…Mr. Heart?”
An unexpected and unbidden sob caught in Jack’s throat and he squeezed his eyes tighter, forcing out more tears.
“Take me home…and take me to bed.”
Jack’s throat worked and he opened his eyes slowly, tears streaming hot paths down his cheeks. “Why did you leave?” he whispered. His chin trembled, breath catching and breaking. “What did I do wrong?”
He ducked his head and covered his hand over his eyes. Sobs piled in his throat, causing his body to shake as they swelled up, threatening to break him down.

YEAH, YEAH I KNOW, THAT JUST MADE YOU WANT THE BOOK MORE, BUT YOU ONLY HAVE A FEW MORE DAYS TO WAIT I THINK! I WILL BE BACK WITH MY REVIEW ONCE THE BOOK GOES LIVE! THANKS FOR JOINING ME FOR MY TEASER POST!