HELLO GUYS, I AM SUPER EXCITED TO BE REVEALING THE COVER AND DOING PROMO FOR DAX'S DESIRE; BOOK 5 IN THE BRILLIANT SERIES THE AVANTI CHRONICLES; BY HANNAH WALKER! BELOW IS THE COVER, BLURB, AND EVEN A TEASER! LET'S GET STARTED!! 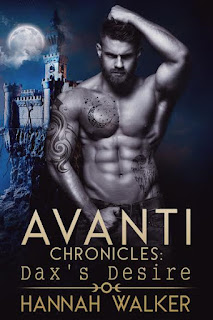 ISN'T IT BEAUTIFUL! (YUMMY) HERE IS THE BLURB:


The Avanti have made their way to Berinias, the capital and heart of Landran society. Not only is it King Kastain’s home ground, but it’s the seat of the Conclave's power.
Dax finally gets to see Kastain in all his glory— regal, confident, powerful and downright sexy. As events unfold, Dax and Kastain realize everything happening with the Derin, with Martellon, Nestor and Teriva is linked. Their enemies draw closer and the plots and machinations of the Conclave deepen. They just need to work out who is behind it all and what do they hope to gain.
Kastain finds himself turning to Dax, the one person he seems to be able to count on more than anything. The bond between the two leaders is stronger than they expected, and they long for rare times alone so they can explore it. Instead their time is taken up trying to work out which Chieftains they can count on and who is attempting to undermine them at every turn.


When plots and betrayals run deep within the heart of the capital, who will succeed and who will pay the ultimate price?


Dax picked up a tub of fruit for Chance, who took great pleasure resting it on Dax’s head as he munched away. An occasional drop of fruit juice dropped down onto Dax and all he did was laugh and wipe it off. They came across a stall that allowed people to win toys. The contestants needed to sit in a special seat and peddle a toy refrinti to victory, beating the others around them. They simply watched for a moment until Chance spied a giant stuffed refrinti, that must have been five times his size. Kastain sniggered quietly, already seeing how this was going to play out.
With a resigned sigh, Dax sat down in the seat, keeping Chance tucked on his lap with one arm. All around them, other parents were good-naturedly teasing and taunting each other. Most of them also had little ones sat in their laps.
Dax tickled Chance in the ribs. “Oh, the things I do for you little man.”
One of the warriors beside him, looked towards him. “Worried you’re going to lose, Dax?”
Dax looked at him and burst out laughing. “Skern, what got you trapped into this?”
“Meet my niece, Bilena.” Skern gestured to the four-year-old in his lap.
“C’mon Unca S, I want the green Faronine.”
“Looks like we have our orders, Commander. May the best team win!”
The stall holder was grinning at them both. “Are you ready gentlemen? Three, two, one… go!”
Chance and Bilena were cheering wildly as Skern and Dax tried to peddle faster than each other.
Round and round the little carved refrinti went. Both men were racing as fast as they could, while throwing taunts in each other’s directions. A small crowd, of what could only have been warriors, were gathered around them, cheering them both on.
Kastain saw Corin and Kel move closer, watching the action and laughing when Chance was so focused on Dax and his task, he never noticed his fathers’ standing behind him. More secure in his disguise, he stepped closer to them. Dax and Skern were neck and neck, there was barely a hair’s breadth between them. All eyes were on the board, designed like a forest as they neared the home straight. The stall owner crouched down so he could see who passed the finish line first.
The crowd saw how close it was— there was silence when the race was finally over. All eyes turned to the man running the stall.
He looked at the track, at the men, then at the little ones. His smile tipped up. “It’s a draw. He drew both toys down and passed them over. Chance and Bilena were happy, Dax and Skern… not so much.
“Please? I need to know if I beat him. I’m not above begging.” Skern was laughing as he spoke.
“If you two young warriors want to test your prowess… there is an arm wrestling stand over there.” The old warrior pointed behind the two of them.
Skern and Dax looked at each other. “Oh, it’s on.” Skern made a huge show of flexing his muscles, laughing at the good-natured ribbing sent in his direction.
Dax narrowed his eyes at Skern. “As soon as the little ones are settled, you and me, wrestling. We’ll see who comes out best.”
Word was quickly spreading amongst the assembled warriors. For those who were friends with Dax and Skern, it was a chance to pit Avanti against Landran. For others, it was simply a chance to see how good these Offworlders actually were.
Kel stepped forward, groaning at the sight of the large refrinti Chance was now cuddling as close to his chest as he possibly could. “Really, Dax? Are you sure there wasn’t a bigger one?” His voice dripped with sarcasm. When he went to take the refrinti from him, Chance held on tight, arms wrapped around its neck. “You do know it’s going to be almost impossible to separate him from it now? He’s probably going to sleep with it.”
Chance’s only response was to hug it even tighter, his little fist clenching tight, a little scowl visible at the corner of his eyes.
Kel’s sigh was exasperated. “Come on, little one. Why don’t you both come and cuddle Papi?”
“Papi…” Chance was looking warily at him, but allowed himself be lifted out of Dax’s arms. Before he was out of reach, he leaned over and laid a big sloppy kiss on Dax’s cheek.
Dax, his heart melting a little, returned the gesture. His Avanti face slipped back in place, he turned to Skern. “Let’s do this, you ready to lose?”
“Who said anything about losing, old man?” Skern taunted.
Dax spluttered. “I’ll give you old man, there’s only about four years between us!”
“Ah, but those four years are crucial.”


“I guess we’ll see, won’t we?” Dax walked towards the stand with the wrestling podium set up on it. By now, quite a crowd was following them, including Hunter, Tir and Bray. Oh, I am not about to lose in front of these guys…

OH YEAH, I NEED THIS BOOK YESTERDAY! I CAN'T WAIT FOR THE RELEASE OF THIS ONE! THANKS FOR JOINING ME FOR THIS PROMO POST, SEE YOU NEXT TIME FRIENDS!