HEY FRIENDS, TODAY I HAVE A PROMO POST FOR YOU: LOOK BELOW FOR DETAILS ABOUT REBUILDING HOPE; A KINDRED STORY; BY JESSIE J! I HAVE BOOK DETAILS AS WELL AS AN EXCLUSIVE EXCERPT: SO LET'S TAKE A LOOK! 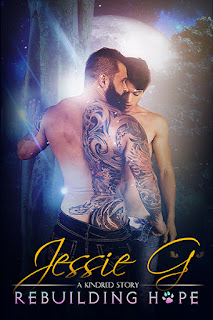 BLURB: Holden Bancroft was born with a better than average brain and not much else.
Often described as strange and sickly, his attempts to conform only made him look foolish and
a life-long diet of pills hasn’t provided a cure. Deciding to strengthen the only tool in his arsenal was
liberating and learning became his greatest joy. But each episode is another reminder that his time
is limited, and Holden intends to use everything he’s learned to help the small town of Hope before
he dies.

Alpha Crowley Lomond, Zenith of the Americas, isn’t exactly happy with his ascension. Leading isn’t
the problem, it’s acting like he’s somehow better than every other shifter that chafes. But while living
and working beside them may seem noble, Crowley is more than just an alpha. As Zenith, he’s their
example, their teacher and guide, and the one they will turn to when their way of life is threatened.

Meeting changes them in ways they never could have predicted and unveils a web of deceit that began
long before they were born. Together, they will have to unravel the lies and reconcile the
consequences if they are to protect the shifter way of life. Along the way, Crowley will become
the Zenith his Kindred was born to love and their enemies will learn that there's nothing more
dangerous than fated mates.

THIS LOOKS GREAT RIGHT, AND THAT COVER, SO SEXY! GRAB IT BELOW RIGHT AFTER YOU READ THIS EXCLUSIVE EXCERPT!

“Crow.”
Holden was pretty sure he was going to have to stop using that name, though
Alpha or Zenith sounded strange. Which he supposed was right. They were strangers
or Holden wouldn’t have been surprised to learn he had slept with the most powerful
man in the western hemisphere. Talk about blowing things out of proportion.
What had he said to Abigail? How could anyone live up to the hype?
Question answered.
Crow…no, Crowley. Alpha Crowley Lomond, Zenith of the Americas brushed the
hair back from his face and pressed warm lips to his forehead. “You’re burning up,
Kit. Come inside and let me take care of you.”
Holden couldn’t think of anything he wanted more and looking up into those dark
eyes, it was almost possible to block out the guns that were pointed down at them.
Oh, wait, no, they were still there, and Holden imagined he could feel the intent from
the men on the surrounding wall. It was every childhood nightmare come to life,
with his mother’s voice whispering a mournful ‘I told you so’ in the background.
She said they would kill him given the chance and here he was, walking right into
their crosshairs.
Completely out of his element, Holden remained mute when Crowley turned them toward
the house where more soldiers blocked their path. There wasn’t enough great sex in the world
that would entice him to walk that gauntlet.

THANKS FOR JOINING ME FOR MY PROMO POST OF REBUILDING HOPE, I LOVE THIS AUTHOR SO I KNOW THIS BOOK IS GOING TO BE AMAZING! GRAB IT TODAY! 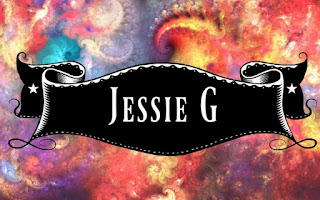 at September 28, 2018
Email ThisBlogThis!Share to TwitterShare to FacebookShare to Pinterest