HELLO FRIENDS, I HAVE A COVER REVEAL FOR YOU TODAY THAT WILL HAVE YOU AS EXCITED ABOUT THIS BOOK AS I AM! LOOK BELOW FOR THE COVER, BLURB, PRE-ORDER LINK, AND EVEN AN EXCERPT OF EYE OF SCOTA; DALRIATA #1 BY SERENA YATES! LET'S GET TO IT! 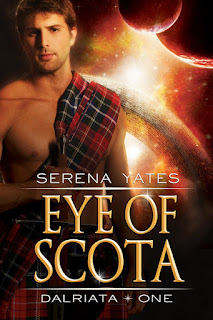 NOW FOR THE BLURB:

In 845 a group of Gaels fleeing the Vikings stumbled through the mystic Eye of Scota and found safety on a planet they named Dalriata. Seven centuries later, the arrival of the Crìosdaidh religion changed everything. Fugitives stopped appearing, and the newly established Council of Priests used the energy of Slànach Stones to enforce their religious laws. But by 2500 the Stones’ power is dwindling. The High Priest is desperate—none of the warriors sent to find more Stones have returned.

Cináed MacAlpin, a young healer priest, is chosen to undertake another attempt. He hopes that new Stones will reduce the pressure to heal only those deemed worthy by the priests. But his task is not easy. Cináed must travel to the land of Bunádh and find the Eye that is the source of the Stones. Once there he meets Tadeo Banderas, a spaceship captain exploring the newest Earth-like planet discovered by the Solar Exploration Fleet. Cináed and Tadeo soon find out that the spark of energy between them may hold the key to Dalriata’s future.

SOUNDS AWESOME RIGHT? OF COURSE IT DOES, I LOVE SERENA YATES! HERE IS AN EXCERPT FOLLOWED BY THE PRE-ORDER LINK!

Twenty-sixth century Planet Dalriata “I CAN’T do this anymore.” Cináed MacAlpin covered his face with his hands in a futile attempt to hide from the reality of his dilemma. “What? Heal people?” Akir’s voice brought him back to reality. They weren’t alone but having lunch in the monastery’s common refectory. Not that he was hungry after yet another morning full of agonizing decisions. “No, of course not.”

Cináed gave up his brief attempt at ignoring the world and looked up at his boyhood friend and fellow healer priest. Even as close as they’d always been, Cináed had never dared speak to Akir about his doubts. He couldn’t put his best friend’s life in danger like that. The Council of Priests would be certain to send the Inquisition after both of them if they found out about his heretic thoughts.

“I’m sorry, I’m just tired.” “It’s been a long morning.” Akir nodded, but his frown didn’t lessen. “I think we could both do with some fresh air before our afternoon duties.” “Fresh air?” Cináed wanted to lie down and sleep for a week, not go for a walk. Having to refuse treatment to the “unworthy” had mentally exhausted him. Knowing there was nothing he could do made him furious with helpless anger. He would have preferred to be able to rest before facing his rigorous afternoon warrior training. Blast his father for insisting Cináed didn’t give up that part of the MacAlpin family tradition, even though he was now officially a healer priest. The only part he looked forward to was being able to get out of the stupid robes and don one of his kilts. “Yes, out in the forest, where it’s nice and quiet.” Akir’s bright blue eyes sparkled as his gaze intensified. “Fresh air it is.” Cináed smiled. A look like that from Akir meant his friend was planning something.

They finished the meal quickly, Cináed forcing himself to eat at least part of the delicious fresh vegetables on his plate. Deliberately reducing his strength made no sense. They returned their plates and eating utensils to the kitchen and made their way through the bare stone corridors to the exit. Though the guards gave them odd looks, they didn’t dare question the two white-robed healers and let them pass unchallenged. As soon as the heavy wooden double door closed behind them, Cináed breathed easier. One path led toward the sprawling city with its stone spires and broad alleyways at the foot of the hill, the other toward the wilds of the forest.

Tall trees, overgrown by sùbh vines with their yearround red flowers, offered sanctuary from the glaring summer sunshine. The usual cacophony of multicolored birds greeted them as they approached the welcome shade. Soft moss replaced the prickly grass when they passed into the domain of the ancient darach trees. They walked in silence for a while, making sure there was enough distance from the oppressive environment that had become their home when they’d left their families at age five. Both of them were supposed to have become warriors, but the tests all children had to go through had shown them to have the mental abilities required to work with the Slànach Stones. Since that always took precedence, it had made them wards of the Council of Priests, changing their lives forever.

“So, tell me what it is exactly that you can’t do anymore.” Akir stopped walking and turned toward him. “I told you that I was just tired.” Cináed wasn’t sure he’d be able to overcome twenty years of indoctrination. Talking about the doubts that had begun to plague him was risky, even though they were alone and nobody could possibly overhear their conversation. Voicing his secret thoughts would somehow make them more real and would make being an obedient believer and servant even more difficult. “You didn’t really think I’d believe that, did you?” Akir raised his eyebrows.

“Well….” He’d hoped it might be enough. “Look, I’ve known you ever since we were put into the same student group after passing those tests. Something’s been bothering you since we graduated into full service last summer, and what you said earlier must have expressed whatever it is that’s wrong with you.” Akir looked around and pointed at a fallen tree. “I think it’s pretty serious if it’s got you down this much, and I want to know what it is so that I can help you.” “There’s nothing you can do.” Cináed followed his friend into the clearing and sat down next to him. “Aha! So you admit it.” Akir grinned, his white teeth flashing in the semishade.  “Talking about it could get us both into trouble.”

Cináed looked down, no longer able to resist the intense curiosity coming from his friend in waves. “I’ve never seen you this depressed, so it seems to me that not talking about it isn’t working too well either.” Akir put a hand on Cináed’s knee, making him look up in shock. Touching between males was forbidden by the Council of Priests. With that one move, Akir had made himself as vulnerable as if he’d openly spoken out against the religious rulers of Dalriata. “I think it’s time we’re honest with each other.” “What are you doing, Akir?” Cináed was well aware of his own forbidden urges, his longing to touch another man. But he’d never thought of Akir that way—and he was almost certain his friend didn’t see him like that either. What was going on? “I’m trying to make you see that we’re both on the same side.” Akir withdrew his hand and sighed.

“We’ve always trusted each other, and yet we can’t seem to talk about things like we used to. Something is obviously bothering you, but you can’t, or won’t, talk to me about it. I think this religious indoctrination we’ve gone through has gotten between us, and I hate that.” “You do? You never said anything.” As the words came out of his mouth, Cináed realized how stupid they were. “Of course you didn’t. It would’ve been too dangerous, with the way everyone spies on everyone else.” “That, and the fact that there never seemed to be any need. You seemed fine.” Akir tilted his head. “But that’s changed, hasn’t it?”

LOOKS GREAT RIGHT? WELL I WILL BE BACK ON THE 29TH OF THIS MONTH TO TELL YOU HOW GREAT IT IS, BECAUSE THAT IS RELEASE DAY! THANKS FOR JOINING ME FOR THIS COVER REVEAL, SEE YOU THE 29TH!