HEY FRIENDS! I AM HERE WITH A PROMO POST FOR 'THE FLORIST' A WORKPLACE ENCOUNTERS STORY BY SERENA YATES, AND I CAN'T WAIT TO TELL YOU ABOUT THIS BOOK! BELOW IS THE AWESOME COVER, THE BLURB, AN EXCERPT, AND THE PRE-ORDER LINK, SO LET'S GET TO IT! 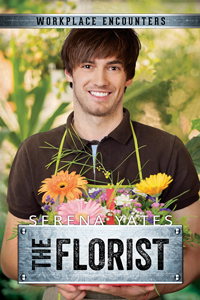 I LOVE ALL THE WORKPLACE ENCOUNTERS COVERS, AND THIS ONE IS NO DIFFERENT! HERE IS A LOOK AT THE BLURB:


2nd Edition
A Workplace Encounters Book
When freelance florist Dylan White gets a call that a good friend has died and left him a flower shop, Dylan isn’t sure he wants the commitment. Still, he travels to Florida to speak with the law firm, where he meets defense attorney Sean Mellick in the corridor. Sean makes a point of “running into” Dylan again, and Dylan eventually agrees to a date.
While romance blooms between the two men, their careers aren’t going as smoothly. Dylan faces employee resistance and sabotage, and then inexplicable expenses leave him on the verge of bankruptcy. An offer to sell that sounds too good to be true makes him suspicious, and he asks Sean for help. Though they’ve had very little time together, Dylan and Sean need each other to work through the issues and plant the seeds for the future they both want.
SOUNDS GREAT RIGHT? WELL BELIEVE ME, IT IS! HERE IS AN EXCERPT TO GET YOU EVEN MORE EXCITED:
Dylan took a deep breath of the fresh mountain air and turned around to face the other people in camp. Some of them were quite nice, but this was a beginner’s trip, so most of them weren’t as adventurous as he’d hoped. Only one more day, then he’d have to return to reality. The busy-looking camp was a welcome distraction from that discouraging thought.
“Can I speak to you for a moment?” Peter, the trip leader, held the satellite phone in a white-knuckled grip as he waved Dylan aside.
“Sure.” Dylan followed him to a small copse of trees at the end of the beach where the rocks rose up out of the ground, framing the river like guards.
“We’ve had a call while you were exploring.” Peter took a deep breath. “Unfortunately, you’ve had some bad news.”
Dylan felt the blood drain from his face. Oh shit. What if it was his parents? He dropped back and let the still warm rock face at his back support him while he tried to breathe.
“Dylan?” Peter held out a steadying hand. “Are you okay?”
He shook his head at the inane question. “Do I look okay?”
“No, sorry. Just don’t panic, please.” Peter didn’t look so great either, despite his deep tan. “It’s not your family.”
“That’s a relief.” More than he wanted to admit. “But what else could possibly be serious enough for someone to track me here?”
“I have instructions for you to call a Mr. Graham Havens in Jacksonville, Florida. He said he’d explain it all.” Peter held out the satellite phone and pulled a piece of paper from his pants pocket. “Here’s the number.”
“Jacksonville?” Dylan took the phone and paper with shaking fingers. The only person he knew there was Mike Benton, his best friend from his year in floral art school. Mike had lost his parents when he was ten and had been raised by his grandparents. Dylan and Mike had become inseparable and even worked in the same place for a while, shared an apartment. But then Mike’s grandparents died within months of each other, and Mike had moved to Florida to open his own shop with the money they had left him. He’d repeatedly asked Dylan to come work with him, but Dylan had shied away from the responsibility of running his own business.
“Please, just call the number I gave you.” Peter turned around and ran, as if bad news were a contagious disease.
Dylan shook his head, wishing he didn’t have to do this, and dialed.
“Havens, Kettler, and Patel. How may I help you?” The female voice sounded brisk and businesslike.
“Could I speak to a Mr. Graham Havens, please?” What the hell was going on?
“Who may I say is calling?”
“My name is Dylan White, and I was told to speak to Mr. Havens as soon as possible.” Sooner if at all manageable; the suspense was killing him.
“Certainly, Mr. White, I’ll check if Mr. Havens is available. Please hold.” The soft click followed by an annoyingly cheerful tune was the only sign he was still connected.
After a wait that seemed much longer than it probably took in reality, another soft click followed.
“I’ll put you through now.” She was gone before he could thank her.
“Graham Havens.” The voice was deep and sounded serious. “Am I speaking to Mr. White?”
“Yes, you are.” Dylan cleared his throat. “Can you please tell me what’s going on? I’m in the middle of a vacation here, and to get a mysterious message like this isn’t exactly helping me relax.”
“I’m sorry to be interrupting your vacation, but I felt this news couldn’t wait. It has already taken us a couple of days to locate you, but things are always more difficult over the weekend.” Mr. Havens rustled with some papers. “It’s imperative that you come to Jacksonville, Florida as soon as possible.”
“Hold on for a moment.” Was this guy for real? “Before I go anywhere, I’d like to know who you are, what this news is that you keep talking about, and why it would require I come to Jacksonville all of a sudden.”
“They didn’t tell you?” Mr. Havens sounded shocked.
“No, they didn’t.” Dylan rubbed his temple with his free hand, wondering who these mysterious they were supposed to be. He hated tension headaches, and this was going to be a doozy if the mysterious comments didn’t stop soon.
“Again, I am sorry.” Mr. Havens paused as if considering how to begin. “This may be a bit of a shock to you, so I hope you’re sitting down?”
Dylan glanced around and discovered a couple of boulders next to the riverside. Good enough. “I am now.”

OH YES, YOU HAVE TO KNOW WHAT HAPPENS NOW RIGHT? OOPS :p, THIS IS ONE GREAT BOOK! HERE IS THE LINK TO PRE-ORDER: RELEASE DAY IS JANUARY 6TH!

AS A HUGE FAN OF THE WORKPLACE ENCOUNTERS SERIES I CAN TELL YOU THAT THIS IS A FIRST RATE ADDITION TO IT, SO GRAB YOUR COPY TODAY! THANKS FOR JOINING ME FOR THE FLORIST PROMO POST! SEE YOU NEXT TIME!

at December 30, 2015
Email ThisBlogThis!Share to TwitterShare to FacebookShare to Pinterest