HELLO FRIENDS, HERE IS THE COVER REVEAL FOR A GOOD FAMILY MAN BY THIANNA DURSTON WHICH RELEASES AUGUST 6TH! WE WILL HAVE THE COVER, BLURB, EXCERPT, AND EVEN A RAFFLECOPTER GIVEAWAY SO LET'S GET STARTED!


HERE IS THE BLURB:

Jack Carmichael’s natural instinct is to take care of people. In his job as a U.S. Marshal, he has done that for 25 years. Unfortunately, being married to his job has left his love life in tatters. Now classified unfit for duty, he retires and comes home to Colorado to figure things out. Dominant and used to taking control like his brother Brent, he has never been interested in spanking. Until a cute Nurse Practitioner catches his attention.

Josh Martin feels lucky. He's not only accepted into Corbin's Bend, but he'll be working at the brand new Corbin's Bend Medical Clinic as its only Nurse Practitioner. At thirty-two, he figures this is his last-ditch attempt at finding a dominant partner who isn't abusive. He finds more than his share of dominant men in Corbin's Bend, not the least of which are the Carmichael brothers. Brent's dominance is both comforting and unnerving, Jack's turns him on.

Josh is unlike any submissive male Jack has encountered and when the younger man asks him out, he decides to give it a go. One day of fun turns into two, three...until Jack, with more failed relationships than he can count in his past and unsure he can be the head of house Josh needs, leaves, burying himself once again in work. Forced to see the error of his decision, he puts aside the worries that have plagued him for months and returns to Corbin’s Bend. To become the good family man he wants to be, he has to earn back Josh’s trust and truly take on a role he’s never considered before: head of a loving discipline household.

SOUNDS GREAT I KNOW: HERE IS THE COVER: 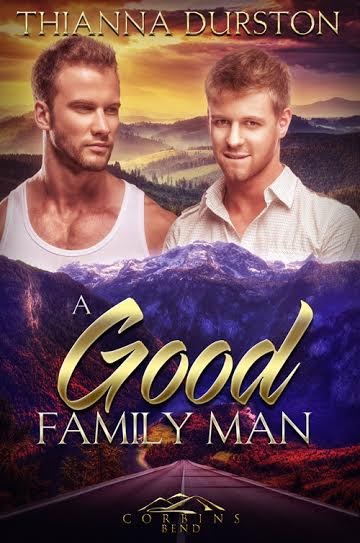 I LOVE ALL THIS AUTHOR'S COVERS, AND THIS ONE IS NO DIFFERENT! HERE IS AN EXCERPT:

Leaping from his current spot, he landed on one of the pads down below, reveling in feeling alive for the first time in months. After chalking up his hands, he turned toward the man next to him who was stretching out his arms and gazing up at a particularly evil looking angle. “When do you have to go home?”
Looking over at him, for a moment Josh looked unsure of himself and finally he smiled, a cute dimple showing in his left cheek. “When I’m done. I didn’t actually forget anything. I just wanted to see you and, well, see if there was anything there.”
Grinning, Jack nodded as he looked at his watch. “Well, then. What do you think about dinner and possibly dancing later on at Tracks?”
Josh’s eyes practically popped out of his head. “I love Tracks! There’s a great bistro nearby. What do you say we meet there in…” He looked at his wristwatch. “Two hours? Then hit the club after?” The grin on his face would have been impossible to resist even if Jack had wanted to.

HERE IS SOME INFO ON THE AUTHOR, HER SOCIAL LINKS, AND INFO ON THE BOOK, INCLUDING THE GOODREADS LINK:

Thianna likes to say she’s eclectic, fun, and just a bit naughty. She can also add, subtract, multiply, and divide in her head, but if people ask her to do it at parties, she isn’t impressed. While she would love to say there wasn’t a genre she had read that she didn’t enjoy, it would be a lie. For some reason, she keeps skipping to the ends of mystery books to find out who done it.
The creator and acquisition editor for the Corbin’s Bend Romance series, she wants to know: Who else wants to be safe, secure, and spanked in Colorado?
Under the name Thianna Durston, she writes M/M romance. Under Thianna D., she writes M/F romance.

HERE IS THE INFO ABOUT THE GIVEAWAY, CLICK THE RAFFLECOPTER PIC BELOW TO ENTER!

THANKS FOR JOINING ME FOR THIS COVER REVEAL, BE LOOKING FOR MY REVIEW IN AUGUST! :)

at April 16, 2015
Email ThisBlogThis!Share to TwitterShare to FacebookShare to Pinterest