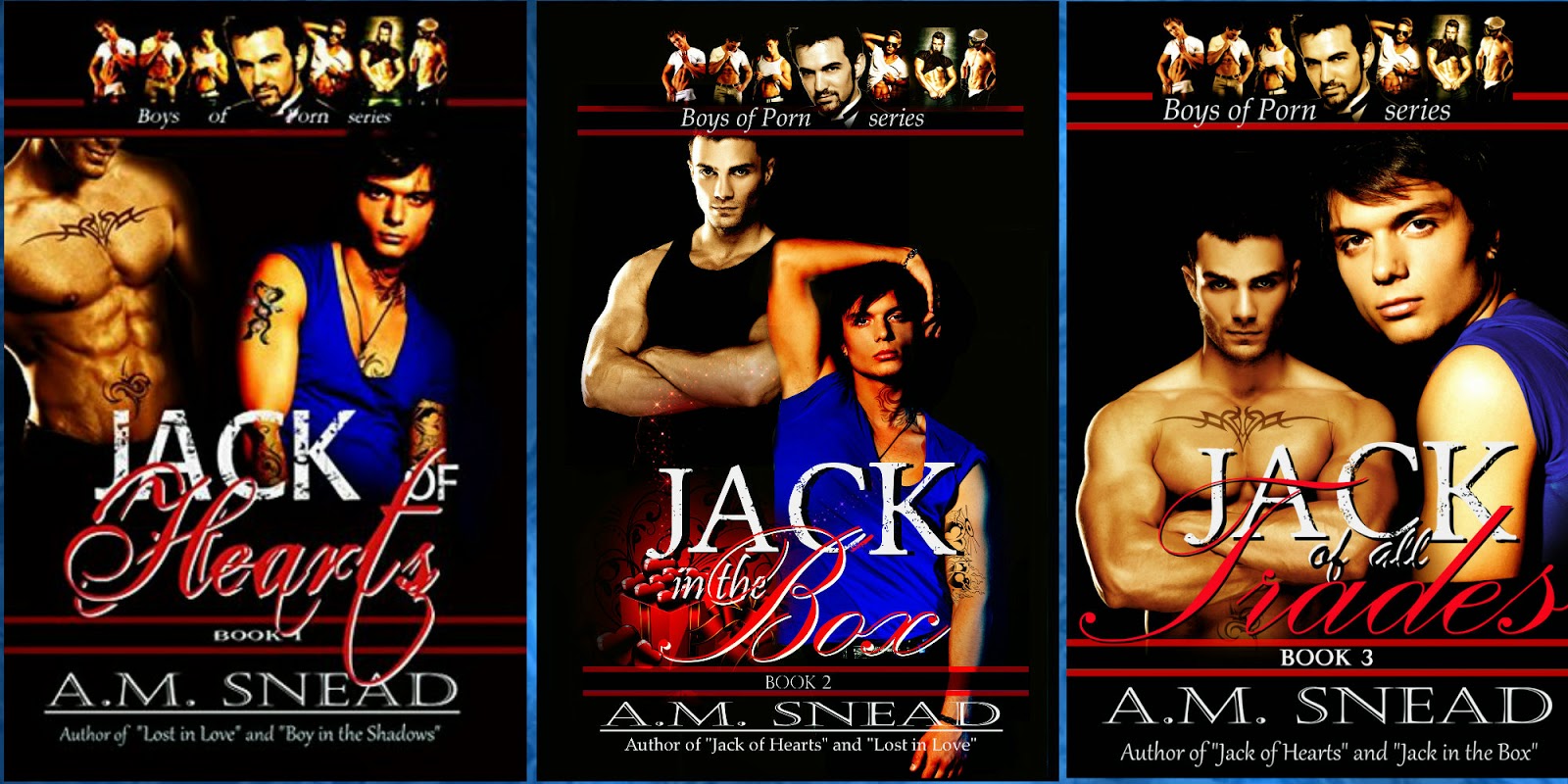 HERE IS A LOOK AT BOOKS 1 &2 ALONG WITH SHORT EXCERPTS AND LINKS TO OUR REVIEWS, AND A SNEAK PEEK AT UPCOMING BOOK 3, ALSO WITH AN EXCERPT, SO LET'S GET TO IT!! 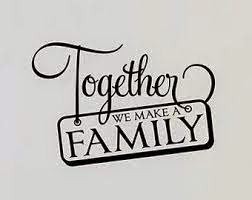 THIS REMINDS ME OF THE BOYS IN GIDEON'S "FAMILY" HERE WE GO:

OUR REVIEW OF JACK OF HEARTS

HERE IS A SHORT EXCERPT:

Oh god, I’m gonna fucking lose it.
Garrett was on Jack like a vice, but Jack didn’t resist him. He pressed against the man, pumping his hips firmly against Garrett’s cock in a rocking motion. He dragged his nails down Garrett’s chest, raking his sweaty skin then rubbed back up and locked his hands behind the man’s neck. He arched suddenly, a loud gasp bursting from him as his back hit the pole and Garrett shoved against him, body shifting and swaying, hips rolling. He grabbed Jack’s leg and pulled it up and around his hip as they worked each other over until they were both panting and moaning.
Jack released Garrett’s neck and reached up, grabbing the pole. He lifted himself off the floor and wrapped his legs around Garrett’s waist, squeezing hard and working his hips against Garrett’s groin as he bent back against the pole, causing his body to arch outward sensually. His skin burned hot, slick with sweat. Garrett held onto his hips, fingers gouging and pushing under the rear waistband of his briefs.
The back of Jack’s head pressed hard against the pole, tilting his face upward. His eyes closed as he bit his lip and moaned, thrusting against Garrett, begging the man with his body to please fuck him. The club and everyone one in it faded out of reach of his awareness and all he could feel was Garrett’s hands on his body, his hard cock straining to get at him. All he heard was the rush of Garrett’s breath blasting against his throat.
Jack dropped his face down suddenly and let loose of the pole with one hand, grabbing the back of Garrett’s head. He pulled him into a hard, desperate kiss – which sent a charge not only through them, but through the entire room as the shouts and whistles broke through his mind fog and exploded into his head.
The song ended with a suddenness that left Jack dizzy, heart pounding, racing wildly. His legs remained wrapped around Garrett, their bodies suctioned tight. Garrett panted into his mouth as their kiss broke, his head shoved against Jack’s brow, eyes burning into him. The man’s chest heaved and sweat drenched his torso as it did Jack’s entire body.
“I need a drink,” Jack trembled in a whisper, throat parched.
A slow smile curved Garrett’s lips. “Drinks are on the house, baby.”
Neither moved as they stared into one another’s heated eyes. Both knew what they really wanted, but no requests or suggestions were made.

We were drunk. It was just sex. It meant nothing. Don’t worry about me. I’m fine.  That is Jack Heart’s mantra to himself and the other boys of the house the morning after his night with Garrett North. And when the man gives him the cold shoulder, barely acknowledging his existence, Jack comes to the full awareness of his mistake with Garrett, and the truth behind Scotty’s words – “As soon as you have sex off camera…he’s going to dump you.” He had thought Scotty was simply jealous, unable to get past his infatuation with Garrett. Now Jack understood – he should have been listening to Scotty from the start.

OUR REVIEW OF JACK IN THE BOX

Jack struggled to hold onto his resentment and rage toward the man as Garrett stepped closer, faced him, then cupped the back of Jack’s head and pulled him into a stiff, tight-lipped kiss. Jack’s legs trembled suddenly and he instinctively gripped the front of Garrett’s shirt. As a heat rushed through him unexpectedly, he couldn’t prevent his own lips from softening. Garrett went rigid with resistance but it lasted only a moment before a sizzling passion exploded through his kiss and he was clutching Jack’s head with both hands, kissing him like a starving man seeking sustenance.
Everything else vanished; the office, Gideon. Everything but the kiss burning them up. Low groans rolled up their throats and into each other’s mouths as their tongues twisted and curled and grabbed at one another. Jack realized he was pressed firm against Garrett’s body and they were both hard as stone. Last night exploded through his head detail for detail; the erotic dance onstage, Garrett pinning him against the wall of the club outside, the trek up the stairs to his bedroom, the mind blowing sex, and then…
The heartbreaking reality that you were nothing to him.
Garrett’s fingers gripped Jack’s head, his kiss intoxicating. Jack still clutched Garett’s shirt in desperate fists, overcome with the need to be closer – oh so much closer – regardless of the pain spiraling through him from Garrett’s betrayal.
Let go of him! Stop kissing him! What are you doing?
The kiss ended so suddenly it left Jack lightheaded and gasping for breath as Garrett released him and stepped back. The man rubbed an unsteady hand over his mouth, swallowing hard. He looked at Gideon, eyes stony. “Convinced?”
Gideon just gazed at him, giving no indication if he was or wasn’t. “You can go,” he said quietly.
Garrett was gone in an instant, leaving Jack motionless, still struggling to get his bearings.

With their impending scene fast approaching, both Jack and Garrett are having second thoughts about the shoot - the memory of the "promo" piece still fresh and painful. Lucas seeks to figure out Bailey's evasive behavior while Mickey's fear for Marcus' safety becomes more visible to those around him. Scotty finds himself trapped in the clutches of a dangerous man he can't break away from -emotionally or sexually. Ultimately, Gideon is faced with a decision that could forever sever his bond with one of his boys, breaking both their hearts, and seeks comfort from the painful choice in the arms of a trusted friend.

You know what you need to say, little brother. Quit stalling.
Jack stared at the bedroom door. Just get it over with, that’s what he needed to do. Be done with the man once and for all. Let it all go. If Garrett chose to continue hating him, then that would be on him –not Jack. Losing Jill had brought to light how short and fragile life was. It shouldn’t be wasted on a grudge.
Maybe telling him now, while the effects of the skit were still strong in his heart and mind, would somehow make it easier. But it didn’t feel easy as he willed his reluctant legs to carry him to the door and out into the hall.
The instant he emerged from his bedroom, his heart began to hammer against his ribs and gained force with each step along the carpeted floor toward Garrett’s room. When he finally found himself standing before Garrett’s door, his heart was pounding so hard his chest hurt and he could barely breathe. How the hell was he supposed to say anything? He could hardly get a breath.
Jack didn’t know for sure how long he stood at the door before he managed to raise his hand to knock. A tremor shook his loose fist when it was still inches from connecting with the wood. He squeezed his fist tighter, went for a hard knock –but instead, his hand flattened quietly on the door and he touched his head to the oak barrier, and closed his eyes, his throat swelling closed.
“I…I love you…Garrett,” he whispered, barely audible. His eyes squeezed tighter and his throat worked as tears struggled to push out. A crippling ache cut through his chest and he shoved his head harder against the door, choking on a quiet sob. “I know that…that you wish you had never met me,” he trembled so low he barely heard his own voice. “But I…I don’t wish the same…I thought I did but I…I don’t.” He shuddered as another sob broke in his throat and a tear found its escape, weaving down his cheek. “I don’t…”

THIS WOMAN IS GONNA KILL ME WITH THESE EXCERPTS HAHA, BUT WHAT A WAY TO GO! IN CASE YOU MISSED THE INTERVIEW I DID WITH "JACK" ON AM SNEADS SPOTLIGHT WE DID FOR HER, HERE IS THE LINK, WE HAD A GREAT CHAT!

at March 17, 2015
Email ThisBlogThis!Share to TwitterShare to FacebookShare to Pinterest