HELLO THERE FRIENDS, THANKS SO MUCH FOR JOINING ME FOR THIS PROMO POST OF BEN'S RAINBOW; RAINBOW KEY 3 BY VICTORIA SUE! I HAVE A CLOSER LOOK AT THE AMAZING COVER, THE BLURB, AND EVEN AN EXCERPT FOR YOU! THIS BOOK COMES OUT TUESDAY, MAY 1st SO YOU DON'T HAVE LONG TO WAIT FOR IT! IF YOU HAVEN'T READ BOOKS 1 AND 2 IN THE SERIES YOU ARE IN LUCK, THERE IS INFO ABOUT A SALE ON THEM AT THE END OF THE POST!

Benedict Keeler was one of America’s most popular models. Hot body, hot career, and super-hot boyfriend, until a devastating house fire destroyed his face and his dreams. After being told all his life that a pretty face is the measure of his worth, he can’t face another rejection and runs from his lover, eventually hiding out on Rainbow Key.
Zachary Quinn, a highly sought after photographer—even if he would rather shoot the homeless in Manhattan than a fashion spread—is now facing the real possibility that a genetic disease will render him blind and his days behind a camera may be over.
Two devastated men, one haunted by his past and one convinced he has no future. Will they both hide from the world, or will they give love, and each other, a second chance? 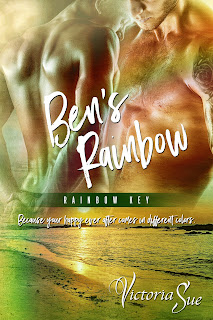 VICTORIA SUE IS ONE OF MY FAVES, AND I CAN'T WAIT TO READ THIS BOOK! ISN'T THE COVER AMAZING? JAY AHEER HAS DONE IT AGAIN FOR SURE, EVERY COVER SHE DESIGNS IS WONDERFUL! NOW FOR AN EXCERPT:

Ben focused on Zach. His eyes were open, and he turned, but Ben could see right away that neither of them was focused on him. The left one was still blue but looked cloudy, like the blue and the white had bled together. The right still looked the same, but they were both red and swollen underneath.


“I’m here.” He stood and took a step to the bed, catching Zach’s hand as he raised it. “What do you need? A drink? Do you need your sunglasses—”
“You.” The cracked, broken answer seemed to split something in Ben, and he sank onto the bed as Zach reached for him, sitting up and wrapping his arms around him. “I can’t believe you’re here. Do you know how long I tried to find you?” Ben felt Zach stiffen as his own words sank in.
“What happened? I mean, I know about the fire, but—”
Ben shook his head then realized Zach couldn’t see him. Where did he start? “I—”
“You didn’t trust me,” Zach said flatly, answering his own question and let his arms fall.
“I—”
“You thought because your skin was damaged, I was shallow enough to have that matter to me.”
Yes. Ben closed his burning eyes. He did, and he couldn’t explain it. He certainly couldn’t justify it. Zach was right to feel the bitterness that was now loud in his voice.
“All the papers accused me of it, especially that fucking reporter that was so obsessed, but I thought you would have known better. You should have known better.”
Ben lurched to his feet. The recriminations that screamed through the wretched whispered words was deafening. How could Zach possibly love him? How could someone else love Ben when Ben didn’t love himself?
“How long have you been here?” the flat wooden voice sounded so wrong coming from Zach’s throat. Zach’s words were always full and warm. Even when he was angry.
“About a year and a half.”
Zach’s head shot up in shock. “All this time? You’ve been here all this time?” The disbelief, the distress, and the frustration. “I thought you had come here on vacation,” he said in complete bewilderment.
“I couldn’t risk—”
“Me finding you?” Zach accused.
“Anyone seeing me,” Ben whispered.
“A girl died. And you ran because you didn’t think you were beautiful enough for people to take pictures of you anymore?”
Zach was right. It sounded a hundred times worse when he said it, but the plain truth was ugly. Far uglier than he was now.
Ben couldn’t speak. Didn’t have anything worth choking out. Sorry, regret was a useless emotion that helped no one. It hadn’t helped Maegan. It wouldn’t help Zach. It had never helped him.
Ben spun around. He needed to go. Now Zach was awake and safe, he could leave. Matt was looking after Kai, but he needed to get him because Matt had work to do. He opened the door, but this time, Zach didn’t ask him to stay. And that, more than anything, told him they were done.