HEY GUYS, I AM SO EXCITED FOR YOU TO SEE THIS COVER! BELOW IS THE POST FROM LEONA WITH THE TEASERS, COVER, BOOK INFO AND SO MUCH MORE FOR ACCUSED: TALANI TRADE ALLIANCE 1, SO LET'S GET STARTED!


Hi! Leona Windwalker here, and I'd like to thank Bec for having me over. Today we're showing off the new cover for my upcoming release, Accused, Book 1 of the Talani Trade Alliance series. It's different from anything else I've written so far. Not just because it's sci fi, but also because the characters along the way revealed their very kinky natures and let it all, er, hang out, so to speak. ::looks innocent:: 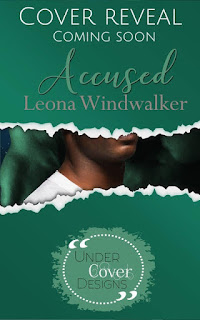 What?! That's not enough of a look? Okay, okay, I'll fill you in a bit more, shall I? Accused is a sci fi story because it has aliens in it and space travel and all that jazz. But it's not set in the future. Nope, it's set in an alternative now. The Talani Trade Alliance made themselves known and sought to extend negotiations to bring Earth  towards a footing where they could meet conditions to apply to be a member world. To this end, they established an embassy in the US, complete with a department of trade, so that Earth companies could negotiate trading rights with Talani Alliance members.

Of course, there's also politicking going on, with various countries angling for favorable scientific trade and such.This led to the Volunteer program, where humans who met the criteria can go and apply for training and employment off-world. It also led to the much lesser known Penal Volunteer system, where humans who are deemed to have committed a criminal act against a member of the Talani Allaiance, or one of their human employees, ends up having to accept training and work to re-pay their societal debt. Sounds fairly innocuous, no? Definitely, no, as Matthias Reynolds finds out to his detriment. The Talani have the power to arrest anyone who breaks one of THEIR laws, not just local human laws. So a night out drinking with an awkward morning after with his best friend leads to unexpected consequences.

Matty turned away from the counter when the usual hubbub died into eerie silence. He quickly spied the reason why. It was rare to see actual Talani in person unless they were hosting a recruiting event or apprehending someone who had violated the law in a crime involving the Talani in some way. These two did not look recruiters. They were huge and musclebound, wearing tactical armor and carrying side arms. One of them locked eyes with him and strode forward.

“You are Matthias F. Reynolds?”

“Yes. How may I help you?” he asked with a puzzled expression.

The giant of a man held out a data pad to him. “Please indicate you are Matthias F. Reynolds here, by placing your thumb and forefinger here.”

Matty did as he was asked.

The other man drew close, removing restraints from his waist and making a grab for Matty's arms.”

“What the hell, man?” Matty cried out.

“Now that you have agreed to the charges and identified yourself as Matthias Reynolds, we are placing you in custody.”

None of the customers or other cafe staff would meet his eyes. All he could do is allow himself to be dragged towards their SUV, wondering exactly what charges he'd supposedly accepted.

“You didn't tell me what I'm charged with!” he yelled.

The first man replied, “It was on the document you placed your prints on.”

“You said that was to just say that I was me!”

“You should have read the document and not just signed it with your prints.”

“There was just some letters and numbers! I thought they were nothing!”

“Tapping those would have shown you the document. You have to know what you did anyway. We have your DNA on the victim.”

“What?” With a sinking feeling, he came to understand just how they must have come across his DNA. “Oh, Duane, no.”

Heartbroken, he spent the rest of the ride in silence. The vehicle's windows were tinted dark, adding a pall of gloom over the world flowing past his window. A storm was rolling in, and the sky began to grow darker. It felt like a portent of worse things yet to come. After what seemed like forever, they pulled up to the security checkpoint outside the gates. Due to the storm, the garden area out front was devoid of people despite it being lunchtime. They drove through the abandoned area and an even darker pall fell over the car as they drove into an underground parking garage.

From there, he was taken to a secure elevator. The ride up seemed interminable. The silence was deafening as his two guards neither spoke nor so much as looked at him. The elevator itself made no sound and it stopped for no one as it passed floor, after floor, after floor. At long last, they came to level fifty-eight and the doors opened. He was escorted down a hall where he was given disdainful looks by human staff members. He saw no other persons restrained as he was, nor did they bring him to a cell. Instead, he was ushered into a judicial chamber that looked straight out of the movies. One of his captors spoke to a Talani just inside the door. This Talani answered back in their language as he made some sort of entry onto a data pad in his hands. His captors then pulled him towards a seat in the center of the room.

Several minutes passed before a door opened at the rear of the room. A single Talani male strode in, climbing the dais to reach a chair. From where he now sat, he was able to gaze down upon Matty. He, too, held a data pad, and after giving Matty a level stare, he turned his gaze to the data pad where he appeared to be reading a report. Matty found himself wishing once more that he could roll back time.

I'd make damned sure I'd not drink so much this time. I'd take better notice of Duane and really see how he was feeling for me and deal with it before we'd end up doing what we did.

The seated Talani stood. “I am Judge Advocate R'nar Tasmit and this is my court. I have read the case before me. You, Matthias Reynolds, stand accused of aberrant sexual conduct in which you took advantage of an acquaintance, convincing him to have sex with you under false pretenses. He admits to being drunk, after having gone out for a night of drinking with you. After which, you accompanied him home, told him you loved him, and enjoyed sexual congress with him. He was under the belief that you were now a couple, but you informed him this was not the case come morning. Is this correct?”

“We'd gone drinking, yeah, but I don't remember leaving the club or anything. I only became aware we had sex when I woke up in his bed the next morning.”

R'nar frowned. “A crime committed while drunk is still a crime. Do you admit to telling him you loved him, accepting sex from him, and then admitting this morning that it had been a ruse? That you had, in fact, taken unfair sexual advantage?”

“A ruse? No, no ruse! I love him like a brother, sir. And I did not know we'd even had sex until this morning.”

“This is quite a serious charge, young man. Theft of sexual favors is a crime within the Talani Trade Alliance. The Trade Alliance has jurisdiction as the crime was committed against one of our people. A human employee, but nonetheless, a person under our protection. You have two choices. I can either refer this for a full trial, during which you will be incarcerated in a Talani prison while awaiting trial back on Telani Prime, or you can accept a plea bargain. The bargain we offer is that you admit to being careless with the manner in which you solicited and accepted sexual favors. In exchange, you agree to a lifetime work contract.” 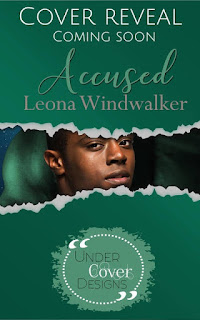 Still not enough? Okay, okay, I'll stop teasing. This is a romance, after all. His man? Well, let's see:

Matthias Reynolds loves his life. He's starting to make it as a graphic artist at last and has a job he really likes at a local café that pays the bills. When a night out clubbing leads to an awkward morning after, he's embarrassed and more than ready to forget  all about it. When Talani Enforcers show up at the café, he doesn't know what to make of it all as he's led away in restraints.

Standing accused of crimes he struggles to understand, he finds he has an unexpected champion: the Talani warrior and war hero J'nah Quislin. J'nah knows that Matty is his. All J'nah has to do is keep Matty safe from those who engineered Matty's charges and sentencing. That, and get Matty to accept that universe always intended them to be together as one. All it requires is for Matty to return J'nah's devotion and offer his willing submission. Can Matty do it, with all that it will mean for his future?

Yep, our guy is being romanced by a very dominant Talani warrior male. And did I mention that the Talani have three genders? No, it's not impreg, per se, but Matty does have a role to play in bringing J'nah's young into the world. If that has your head scratching, well, you'll just have to read it to find out. All I have to say is marsupials are not exclusive to Australia, or even Earth. Ahem. ::looks away::

Accused will be available to buy on Amazon from December 27th, 2016, as well as to read via Kindle Unlimited. Keep an eye out here on Bike Book Reviews, as we return with a release day promo that will include the link to get your copy, as well as a giveaway! Annnnnd...drum roll...the full cover! 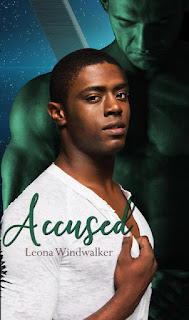 Leona is a longtime staunch supporter of human rights and environmental causes. Her favourite genre to read is M/M fiction and she particularly enjoys science fiction, fantasy, and action/suspense sub-genres—especially if they have a nice seasoning of romance. She has far too many books on her Kindle, has overloaded her phone with even more and, when not reading, writing, being driven to distraction by her children, or being overlorded by her three cats, can be found trying to locate the portal that the sock monster uses to steal socks from her dryer.

Recently head-reeling news for her included her novel, Jared:Urban Wolves #1, being nominated for an Indie Award from Metamorph and placing as a finalist in the 2016 Rainbow Awards, earning an Honorable Mention. She's still suspicious that it's all been a dream, but as long as her readers are happy and she can find at least one of the missing socks, she's happy. 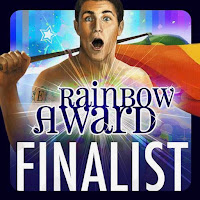 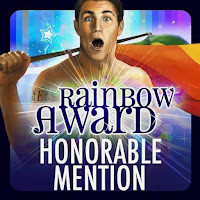 Love the cover artwork and banner? A big shout out goes to the artist, Lee Ching, of Undercover Designs. You can find her on Facebook (https://www.facebook.com/undercoverdesignss/?pnref=lhc).


BELOW IS THE RAFFLECOPTER GIVEAWAY, MAKE SURE YOU ENTER!!

SOUNDS AMAZING RIGHT? I CAN'T WAIT TO BRING YOU MY RELEASE DAY REVIEW! I WILL SEE YOU BACK HERE ON THE 27th  SO I WILL SEE YOU THEN! THANKS LEONA, FOR LETTING ME REVEAL THIS AMAZING COVER! 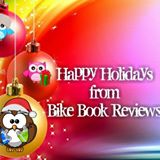 at December 20, 2016
Email ThisBlogThis!Share to TwitterShare to FacebookShare to Pinterest