COUNTDOWN TO THE HOLIDAYS DAY 33: THE ROAD TO FROST HOLLOW REVIEW!!

YAY IT'S DAY 33 OF OUR COUNTDOWN TO THE HOLIDAYS BOOK REVIEW POST, AND IT IS RELEASE DAY FOR: THE ROAD TO FROSTY HOLLOW BY RJ SCOTT & MEREDITH RUSSELL! BELOW IS GRACE'S REVIEW AND THE LINK FOR THIS BOOK, SNATCH IT UP TODAY, IT'S GREAT!! 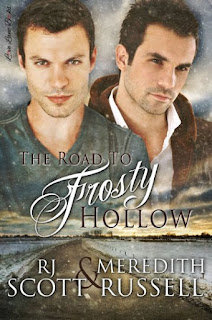 The Road to Frosty Hollow
By: RJ Scott & Meredith Russell
Release Date: December 21, 2016
Length:
Reviewed by: Grace
Buy LinksAmazon US | Amazon UK |
Blurb
Former Marine Nick Sheridan is at a crossroads.  With his entire life ahead of him he struggles to find direction and his place in the world.  Car sharing to get home for his sister’s Christmas wedding seems like a good idea at first.  Spending the time with the man he kissed and left years before, maybe not so much.
Cameron Bennett lost most of his teenage years to cancer and he now lives every day to the fullest.  He decides to drive from seattle to Vermont for his best friend’s wedding and capture moments of it on film.  He hadn’t planned on car sharing with the man who kissed him ten years ago, but somehow he ends up with a brooding Nick by his side.
Along the way, the men learn that sometimes life plans mean nothing in the grand scheme of things.  Love can be found in the most unexpected of ways, and facing your demons head on is sometimes the only way to live.
QUOTE

Seriously, GO KAITLIN!!!
Review:
Two things you can count on with RJ Scott and Meredith Russell, an HEA and tears…  and they deliver with this book in spades.
Nick is dealing with trying to make his life work after medical discharge from the marines.  After 2 ½ years, he’s starting over again, only he isn’t sure which direction to go now.  Going on a three week car ride with his sister’s best friend, the one he kissed before leaving for the military- the one who pushed him away, doesn’t seem like the best idea.  But, he’s willing to do it for Kaitlin.
Cameron is dealing with the unknown medical results he refuses to acknowledge and the abuse he suffered from his last ex.  Driving across country with his childhood crush, probably not the best idea Kaitlin has ever had.  But, they’ve both agreed.
I’ll admit, several times, I wanted to jerk both men up and force them to deal with the elephant in the room-that kiss.  Watching them both struggle, not only with their mutual attraction but their own issues, especially Cameron’s medical fears, was hard.  I was like a cheerleader, chanting for them to win as the journey progressed, and they began to open up to each other, and be honest with themselves.
And with all of the tears, the cheers and new things tried, both men have to find out who they are now so they can move forward in their lives, maybe together.  I truly enjoyed this cross country journey of discovery and love.

Definitely, this book gets the 4 Roadtrip to Love Adventures Rating.

GREAT REVIEW GRACE, AND I TOTALLY AGREE, I REALLY ENJOYED THIS BOOK TOO! GRAB IT FROM THE LINKS ABOVE GUYS, THANKS FOR JOINING US FOR DAY 33, SEE YOU NEXT TIME!

at December 21, 2016
Email ThisBlogThis!Share to TwitterShare to FacebookShare to Pinterest