COUNTDOWN TO THE HOLIDAYS DAY 6: ON WINGS OF SONG REVIEW!!

HEY FRIENDS, IT IS DAY 6 OF OUR COUNTDOWN TO THE HOLIDAYS BOOK REVIEW EVENT AND IT IS MY TURN AGAIN! I AM SO EXCITED ABOUT THE BOOK I HAVE FOR YOU TODAY! ON WINGS OF SONG BY ANNE BARWELL WAS RELEASE DURING THE HOLIDAY SEASON OF 2014, AND IF YOU HAVEN'T READ IT AND YOU LOVE HISTORICAL BOOKS LIKE I DO, YOU WANT TO GET THIS ONE! LOOK BELOW FOR MY REVIEW, THE LINK AND AN EXCERPT! 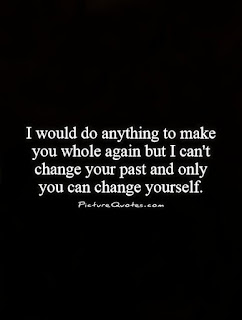 THIS QUOTE IS PERFECT FOR THIS STORY! HERE IS MY REVIEW!

On Wings Of Song
by: Anne Barwell
reviewed by: Becky

Six years after meeting British soldier Aiden Foster during the Christmas Truce of 1914, Jochen Weber still finds himself thinking about Aiden, their shared conversation about literature, and Aiden’s beautiful singing voice. A visit to London gives Jochen the opportunity to search for Aiden, but he’s shocked at what he finds.
The uniform button Jochen gave him is the only thing Aiden has left of the past he’s lost. The war and its aftermath ripped everything away from him, including his family and his music. When Jochen reappears in his life, Aiden enjoys their growing friendship but knows he has nothing to offer. Not anymore. 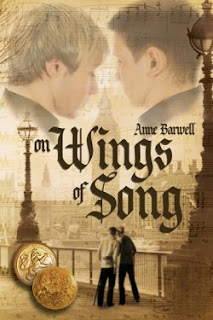 First off let me say that the cover of this book by TL Bland is amazing, and it captures this story perfectly, and what a story it is! This book sucked me in and I was in the WWI era with Aiden and Jochen!

The story starts off with Aiden and Jochen meeting during a Christmas Truce of WWI and you will love both these guys and their budding friendship. I could almost hear Aiden's lovely voice and feel his hopes and dreams!

Jochen comes into a house in England so he decides to look Aiden up, but what he finds is nothing like the Aiden of old, the war has robbed him of his happiness and left him a shell of the man he used to be. Can Jochen bring Aiden out of the nightmare his life has become? Can anyone?

This story will both break your heart and renew your spirit, and I must tell you while this is a romance the heat level is low, which somehow is perfect for this story! Grab this book today, you will love it as much as I do! Thanks Anne, for the perfect story to fall into during the Holiday Season! 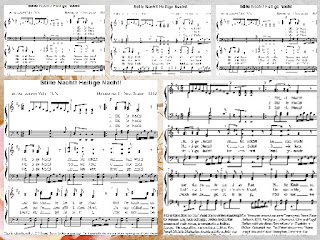 the 5 Silent Night in German rating :)

I CAN'T WAIT FOR YOU GUYS TO READ THIS BOOK AND SEE WHY I DID THIS RATING! BELOW IS THE LINK, FOLLOWED BY AN EXCERPT! GRAB IT UP YOU WILL LOVE IT!!

JOCHEN WEBER pulled his greatcoat around him and continued watching the scene in front of him. It had snowed the night before, the ground a blanket of white, a refuge for those who had survived the last few days. Stark contrast to the devastation of clay, mud, and ruined brick that lay beneath.

Men who had shot at each other mere hours before now kicked a ball around a supposed no man’s land—the forbidden area between their trenches and those of the enemy. The lines between friend and enemy had blurred: British, German, and French soldiers spent Christmas together in Flanders, Belgium.
“Come join us, Jochen!” Arndt Dahl yelled. “Put your book down.”

Jochen waved but didn’t move. “I haven’t even started reading it,” he muttered. Reading was more appealing than the game. He’d never really understood why men felt the need to kick a ball around, and preferred to lose himself in the words that came alive on the page.

He caught a movement from the corner of his eye and turned. A young Englishman stood about a meter away, watching Jochen with something akin to curiosity. He didn’t look much older than Jochen, who was barely twenty. The private, like himself—Jochen recognized the British insignia—was several centimeters taller than Jochen, with dark hair and the most amazing dark brown eyes. He smiled shyly, and Jochen couldn’t help but return the gesture.
“Frohe Weihnachten,” Jochen said quietly, not sure what else to say. “I mean, Merry Christmas.”

“Merry Christmas,” the man said. His voice had a musical quality to it, strong but not as deep as Jochen expected. “I thought this war would be over and we’d be home by Christmas. We all did.”

“Perhaps we won’t be fighting for much longer?” Jochen voiced the hope he mainly kept to himself. “After all, if we can find peace at Christmas, maybe it will last. The war has only been going four months, but it feels much longer.” He held out his hand. “Excuse my manners. I’m Jochen. Jochen Weber.”
The man shook Jochen’s hand. “Aiden Foster.” Aiden shook himself as though waking from a dream. “I’m sorry. I still can’t believe what’s happened. We’re supposed to be on opposite sides. You Jerries are nothing like I expected.” He flushed bright red. “I just insulted you, didn’t I?”

Jochen chuckled. “That depends on what you expected.” He shrugged. “You’re not what I expected either, although I didn’t really believe that you Tommies were as bad as we’ve been told. Not if your Mr. Dickens is to be believed.”
“You’re reading Dickens?” Aiden looked surprised. “Your English is very good.” He grimaced. “Probably much better than my German.”
“Thank you. There were books I wanted to read that hadn’t been translated into German. It was quite the incentive, although I’ve also been told I’m too impatient.” Jochen tapped the side of the book in his hand. “I have read Dickens, but this is Goethe.” He lowered his voice. “Reading a British author in English while in a German trench during a war against his countrymen is probably not very sensible.”

“About as sensible as a Tommy and a Jerry discussing literature on what is supposed to be a battlefield?” The side of Aiden’s mouth twitched.
Jochen laughed. “Exactly.” He liked Aiden already. The man was easy to talk to and had a good sense of humor. One of the soccer balls headed straight for them. Jochen stepped between Aiden and the ball and caught it. “The goal’s that way!” he yelled, pointing to a pile of sandbags a few meters away.
“You could always come and play!” Arndt laughed. He sounded happy, more so than he’d been over the last few months. He missed home, and in particular his girlfriend, Lisel.

“Don’t let me stop you, if you want to join in.” Aiden watched the ball for a few moments.
“Do you want to?” Jochen asked.
Aiden shook his head. “I’ve never been one for football or any game really.” He turned to Jochen. “But as I said, don’t let that stop you.”
“I’d prefer to continue our conversation.” Jochen kept his voice light, but truth be known, he found Aiden rather intriguing. “Besides, this war could go on for a while, and I could not honestly pass by an opportunity to discuss Dickens.”
“I’m more into Tennyson and Keats,” Aiden admitted. “I’ve read one of Dickens’s books, but never got around to the rest.”

Jochen gave him a look of mock horror. “Only one? Which one?”
“David Copperfield. Have you read it?”
“No, I haven’t been able to get my hands on a copy.” Jochen studied Aiden. “So… Tennyson, hmm? Anything in particular?”
“Idylls of the King,” Aiden said without hesitation. “A storm was coming but the winds were still. And in the wild woods of Broceliande, before an oak, so hollow, huge and old it look’d a tower of ruin’d masonwork, at Merlin’s feet the wily Vivien lay.” He trailed off. “That’s the first stanza of ‘Vivien.’ It’s one I keep coming back to because of the war. It’s like the storm, but today the winds are still, or we wouldn’t be talking like this…. Oh Lord, I’m rambling, aren’t I? Sorry.”

“It’s fine,” Jochen assured him. “You make it sound so lyrical. I’ve never read much in the way of British poetry in English, and the flow of it is often lost in translation.”
“I like poetry.” Aiden shrugged, the fire in his eyes fading a little as he retreated back into himself. “It reminds me of music, I guess.”
“I’ve heard it described as music without… the notes.” Jochen hoped that didn’t sound as foolish as he was certain it did. “Are you a musician?”
“Music without the notes.” Aiden sounded thoughtful. “I like that.” He smiled, and his expression softened. Did he realize how breathtaking he was when he smiled? “Yes, I am a musician. I’ve loved music for as long as I remember.”
“What do you play? I love music, although I don’t play anything.” Jochen’s grandmother had attempted to teach him the violin. It had been a disaster, and for months afterward their cat had taken one look at him going anywhere near the instrument, howled, and run away.

“I sing.” Aiden looked a little embarrassed. He studied his boots. “I’ve been with the Avery Theatre for about two years. Or I was until this bloody war.”
“Avery Theatre?” Jochen asked.
“In London’s West End.” Aiden continued to stare at the ground. “It’s a music hall, so there’s a bit of acting involved too.”
“And the shows are focused on the snow?” Performing on stage would take a great deal of confidence. Jochen wasn’t sure he’d ever be able to. Or want to.
“Huh?” Aiden looked up.
“You keep looking at the snow.”
“No! I mean….” Aiden sighed. “I’m not very good at talking about myself. I hate it.”
“Yet you perform on stage?” Jochen tried to imagine a confident Aiden on stage, wooing the audience.
“Yes, but that’s not me. Not really. When I sing, it’s not me, it’s a… role.” Aiden shrugged again.

“It’s still you,” Jochen said firmly. “Be proud of who you are, Aiden. Of what you can do, and of what you want to achieve.” Those were his father’s words, spoken to Jochen as a child, but he’d never forgotten them. Why was he repeating them to a man he barely knew?

JUST WAIT TILL YOU READ THE WHOLE BOOK! (SIGHS) THIS IS A RE-READ FOR ME FOR SURE! THANKS FOR JOINING ME FOR DAY 6, SEE YOU GUYS TOMORROW!

at November 06, 2016
Email ThisBlogThis!Share to TwitterShare to FacebookShare to Pinterest