HELLO FRIENDS, I AM SO EXCITED TO BRING YOU THE COVER REVEAL OF THE INNOCENT BETRAYAL BY VICTORIA SUE! THIS COVER IS AMAZING, AS IS THE BLURB! I CAN'T WAIT FOR THIS BOOK, AND I KNOW IT WILL BE JUST AS AMAZING AS THE INNOCENT AUCTION!! LET'S TAKE A LOOK AT THE BOOK THAT IS COMING SOON! 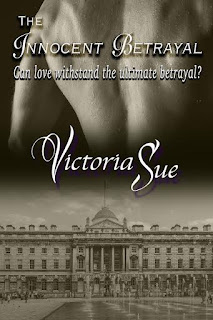 GREAT RIGHT? HERE IS THE BLURB!!


London 1811
Can love withstand the ultimate betrayal?
William was running. Running from his father, running from his arranged marriage, and running from himself. He’d never wanted to manage his father’s vast empire. He would have been quite happy to find some small corner of England where he can read and paint. He knew it would be too much to ask for the company of a man to go with that. Too dangerous. His only hope for escape is to hide who and what he is and pretend to be a servant.
Alex was barely surviving after the fight with Napoleon’s armies. Riddled with guilt, he buried the knowledge of his wife’s death, and his crippled body, at the bottom of whatever brandy bottle he could find.
Two broken souls. One so damaged he thinks he doesn’t deserve love, and one so convinced he would never find it he has stopped looking.
Danger, lies, and espionage. The fate of hundreds of English soldier’s lives depending on them to trust each other, to work together.
Unable to swallow his pride and forced to make a choice, Alex rejects Will and their chance of happiness. Will is heartbroken, and Alex is destroyed. Will Alex realize his mistake in time? Can he learn to trust Will, but more importantly, himself, and would Will ever forgive him if he did? And finally, would love ever survive a betrayal – even if it is an innocent one?

WOO HOO I KNOW I CAN'T WAIT FOR THIS ONE! THANKS FOR JOINING ME FOR THIS COVER REVEAL AND NOW I KNOW YOU ARE JUST AS EXCITED ABOUT THIS BOOK AS I AM :p!! SEE YOU GUYS NEXT TIME!

at June 06, 2016
Email ThisBlogThis!Share to TwitterShare to FacebookShare to Pinterest