HEY THERE FRIENDS, I AM SO EXCITED TO BRING YOU THIS COVER REVEAL AND PROMO POST! I LOVE THIS SERIES, AND AS YOU MAY REMEMBER, I LOVE VIC!!! IT IS BITTERSWEET THOUGH AS THIS IS THE LAST BOOK, BUT YOU CAN BET I WILL BE VISITING MY BOY AGAIN! BELOW IS THE LOVELY COVER, BLURB, A YUMMY EXCERPT, AUTHOR BIO AND MORE, SO LET'S GET STARTED! 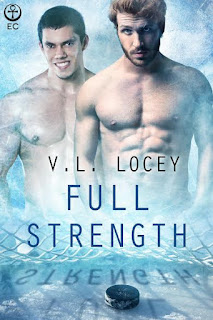 What a difference a year makes. Twelve months ago, Victor Kalinski was one of the best and most controversial ice hockey players in the pros. This year he’s playing in the minors, has a paternity case pending, and has just been vindictively outed to the world by one of his own teammates.
But he seems to find life in the tiny town of Cayuga to his liking. A large part of that is Dan Arou, the Cougars’ alternate captain and the man who now holds Victor’s heart. Surely venomous, viper-tongued Victor hasn’t been mellowed by love!
Well, perhaps a little. But that doesn’t mean he doesn’t intend to get sweet revenge on those who’ve hurt the man he loves and the friends he’s somehow made along the way.
An adult gay romance from Ellora’s Cave

I MEAN YOU NEED IT NOW RIGHT? WELL GOOD THING YOU DON'T HAVE LONG TO WAIT, FULL STRENGTH COMES OUT THE 23rd OF THIS MONTH! YAYYY! NOW FOR THE YUMMY EXCERPT!
“Is there something about pregnant bladders?” I asked as Dan and I meandered through the convenience store while Heather used the bathroom.
“You’re asking me?” He picked up a package of nacho cheese flavored chips and tossed them into the basket riding in the crook of his arm. “Want some blue cheese corn chips?”
“Sure.” I followed the Munchkin with the killer ass. “So what the hell would have made her cry like that? I mean, is Manfred Mann that fucking sob-worthy?”
Dan shrugged a meaty shoulder. “I’d never even heard of Manfred Mann before this car trip. Think we should try to find something nutritious?” His lapis eyes, those eyes that fill my dreams, scanned the inside of the gas station-stroke-convenience store.
“You’ll be lucky to find doughnuts that haven’t been here since Nixon was in office,” I said as I lifted a box of uncooked macaroni and peered into the small cellophane window. “So is that normal? Crying over a fucking Manfred Mann song?"
"I think so,” he replied, then threw a box of powdered doughnuts into his basket. I yanked open a cooler on my right and extracted three bottles of milk, two chocolate and one white for Miss Weepy Britches in the powder room. “I’ve seen some shows about how women’s hormones are all over the place when they’re pregnant.”
“Hmm.” I glanced up when the bells over the door jingled. Heather bounced in looking cheerleader pretty. “You okay with all this?” Dan looked up from the rows of snack cakes to me, then to Heather chatting up the kid behind the counter. She was all white-toothed smiles and flowing golden hair. I’d bet that teenager staring at her like a besotted beaver had a boner so big it was probably tapping the alarm button under the countertop.
“With her, you mean?” Dan whispered. I nodded. He nudged me back a few steps, so Heather couldn’t hear us. “She’s okay,” Dan said glancing over his shoulder to make sure she wasn’t coming toward us then looking back at me. New whiskers covered his cheeks and neck. I had an urge to slam him against the wall and grind my face against his body, starting at his neck then making my way downward until his balls were pink and tender from the abrasion of my whiskers against them. “Stop thinking about sexing me up.”
A sly smile tugged at my lips. Fuck, but he knew me well.


YUMMY INDEED! HERE ARE THE LINKS, GRAB IT UP FRIENDS, THIS BOOK IS AMAZING (I MAY OR MAY NOT HAVE ALREADY READ IT TWICE) :p


GRAB IT TODAY GUYS, TRUST ME! HERE IS A BIT OF INFO ON V.L. LOCEY, USE THOSE SOCIAL LINKS, YOU WILL LOVE HER AS MUCH AS I DO! 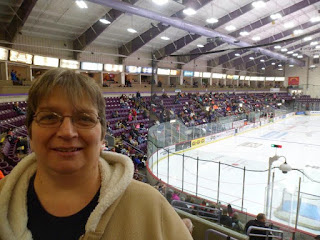 V.L. Locey loves worn jeans, yoga, belly laughs, reading and writing lusty tales, Greek mythology, the New York Rangers, comic books, and coffee. (Not necessarily in that order.) She shares her life with her husband, her daughter, one dog, two cats, a flock of assorted domestic fowl, and three Jersey steers.
When not writing spicy romances, she enjoys spending her day with her menagerie in the rolling hills of Pennsylvania with a cup of fresh java in hand. She can also be found online on Facebook, Twitter, Pinterest, and GoodReads.

HERE ARE V.L. LOCEY'S BOOKS, TAKE A LOOK AND GRAB SOME UP, I KNOW YOU WILL LOVE EM TOO!


THANKS SO MUCH FOR JOINING ME FOR THIS COVER REVEAL AND PROMO POST! I CAN'T WAIT FOR YOU TO READ THIS BOOK, HAVE I MENTIONED I LOVE VIC?! :p SEE YOU GUYS BACK HERE ON RELEASE DAY FOR MY REVIEW! 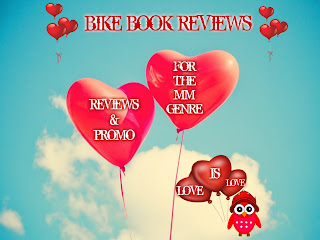 at March 16, 2016
Email ThisBlogThis!Share to TwitterShare to FacebookShare to Pinterest