HELLO FRIENDS, I AM HERE WITH A COVER REVEAL I AM SO EXCITED ABOUT! I HAVE THE COVER, BLURB, A TEASER, AND AN AUTHOR BIO FOR FINDING LOVE; BOOK TWO IN THE FINDING HOME SERIES BY GIGI KERN, COMING THIS MARCH! LET'S TAKE A LOOK!

HERE IS THE AWESOME COVER: I LOVE IT! 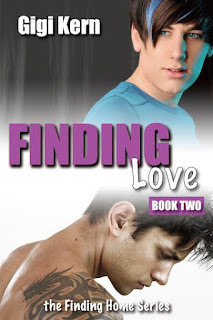 ISN'T IT BEAUTIFUL? NOW FOR THE BLURB: I LOVE THAT TOO, AND I CAN'T WAIT FOR THIS BOOK!


Aaron is in love with his new boyfriend TJ and living with his best friend Ryan. Life is perfect. Right?


Except his past rears its ugly head threatening everything he has and ever wanted.


Now that would be the end of his story, but ever since Aaron met the Fosters and his hot boyfriend TJ, his luck has changed!  Dreams really do come true!!


Shush it's a secret... I know the writer of Finding Love, and she told me...


"When I originally came up with the idea for Finding Love, this is what I had in mind...
Yes I didn't see everything at the time. But I did see their first time. And the anxiety Aaron would have. And I knew that TJ's friends wouldn't "get" their relationship. But I didn't see Rick giving the "talk".  Awesome right!"


I'd tell you more, but I think the author is on the look out. She promised me to secrecy. But how could I not share right!!


Disclaimer:  Because of Aaron's cuteness, TJ's hotness, Ryan's awesomeness and David being David, please Read Book# 1 Finding Aaron first.  How else can you fall under their spell.

I AGREE WITH GIGI, IF YOU HAVEN'T READ FINDING AARON, YOU REALLY MUST! I LOVE IT: BELOW IS THE LINK TO MY REVIEW OF FINDING AARON, WHICH INCLUDES BUY LINKS:

NOW FOR A BOOK TEASER: YOU ARE GONNA LOVE THIS!


“You don’t have to” Aaron said bundled under blankets lying on the couch with all the lights off except for what glared off the TV and in the kitchen.


Becky stopped putting the hot chocolate mix in her coffee cup.  She walked closer to the couch.    “Would you rather have hot tea?”


He started to shake his head “No” but thought better of it when pain started to radiate behind his eyes.  “No I love hot chocolate.  I um…”


Becky, studying Aaron’s face, suddenly smiled.  “Oh, I get it.  I don’t do things I don’t want to.  Ever.  Okay so I will occasionally eat spinach but only in spinach dip.”  She laughed at her own pun.


Aaron smiled.  The more time he spent with her, the more he liked her.


Aaron closed his eyes hopping the migraine medication he took when they arrived worked fast.


“Aaron, I’ll be right back.  I need to get something from my apartment.  Okay.” Becky said and then a door opened and closed.


Just like that the silence now felt oppressive.  Already Aaron felt the loneliness invade his psyche.


“Finally,” he thought when he heard the door open.  Aaron heard Becky say, “Just me.”  He’d have to thank her for calling out.  He never left the front door to their apartment unlocked unless Ryan was home.  He didn’t feel safe with just anyone being able to come right in uninvited or invited.  A shudder rippled along his body.


Aaron heard and felt Becky move around the couch and decided to sneak a peak.


There she was, Becky was in front of him sitting on the coffee table with a dog mug with ears sticking up.  Steam whiffed up from the cup.


Slowly Aaron sat up and leaned back into the plush couch.  Becky had a huge grin on her face and a twinkle in her eye.  It made Aaron a little nervous.


Becky pushed the dog mug toward Aaron, paused and waited for him to take it.  Aaron leaned forward to take the mug but she pulled it away with an innocent look that screamed trouble.


Aaron gave her a look of annoyance but Becky laughed and asked “What?”


With a smile that lit up her face she slowly pushed the mug toward Aaron.


As he reached for it Aaron looked down and couldn’t help but giggle.  He covered his mouth, made eye contact, looked down again and giggled for three whole minutes till his side hurt and tears streamed down his face and snot trickled down.  Becky joined in with the giggled and gave Aaron a tissue.  Amazingly Aaron didn’t spill a drop of his coco.


In the dog mug, there staring back at Aaron was a marshmallow in the form of a cat.  In a dog mug.  It was too funny.


“I LOVE it!”  Aaron said finally able to catch his breath.


“Me too.” Becky said glad she could make this cute boy happy.


Aaron took a sip and came away with a coco mustache.  Grinning, Becky wiped away his mustache.


“I don’t want to eat CAT.” Aaron said as he slowly sipped from the dog mug.


With indignation Becky said, “Aaron, tell me you did not just name the marshmallow that you eat ‘cat’”.


“You are incurable.” She said.


“Hey, you’re the one who gave me hot coco with a cat marshmallow in a dog mug.  With EARS!”


“YES!” Aaron said as they both giggled again.


Still trying to catch a breath, the front door opened and Ryan walked in and stopped in his tracks.  Shock was plastered on his face.  Aaron and Becky giggled again.  Pushed into action, Ryan closed the front door and joined the two gigglers.  Okay so that was Ryan’s word for them, “gigglers”.


“What did I miss? Ryan said as he took Aaron’s recliner.

I CAN'T WAIT FOR THIS BOOK!! NOW FOR AN AUTHOR BIO AND SOCIAL LINKS FOR THE LOVELY GIGI!

Gigi Kern is currently writing the third book, Finding David in the Finding Home series, her first gay contemporary romance series.  A huge fan, she along with thousands wait with baited breath for the next new release from her favorite gay romance authors.

Gigi first discovered her passion for reading out of desperation.  During her month long hiatus for her seventh grade summer break, spending quality time with the grandparents in sunny Florida in August, the hottest time of year, she became desperate.  See, awesome grandparents had no cable.  Travesty though it was, Gigi discovered the retirement community’s library and there it was in all its glory, Heaven by V.C. Andrews.  And she’s been hooked ever since.

Though her day job is monotonous, she has been able to work in three continents, travel and see the world.

Her menagerie of wooden animals from her world travels have major competition from her two cats, Marco-pollo and Squertie.  And, cause what would a menagerie be without animals, her two 65+ pound dogs, Leo the lug and Blink the destroyer of toys.

She is currently writing her life away on the shores of North Carolina.
Gigi Kern can be reached at her Official Author website www.gigikern.com, Facebook at www.facebook.com/kerngigi or through Twitter at www.twitter.com/kerngigi

I LOVE THIS BIO, AND YOU WILL LOVE GIGI, SHE IS DELIGHTFUL, SO USE THOSE LINKS! THANKS FOR JOINING ME FOR THIS COVER REVEAL, I WILL SEE YOU BACK HERE WITH MY REVIEW OF FINDING LOVE! SEE YOU THEN!

at February 15, 2016
Email ThisBlogThis!Share to TwitterShare to FacebookShare to Pinterest