HELLO FRIENDS! BOY AM I EXCITED ABOUT TODAY'S COVER REVEAL! I HAVE THE AMAZING COVER OF: DEMONS DON'T DREAM; DEMONIC TALES #1; BY: HANNAH WALKER, ALONG WITH THE BLURB, AN AMAZING EXCERPT AND EVEN SOME EXCITING NEWS ABOUT RELEASE DAY! LET'S GET TO IT!!


HERE IS THE BEAUTIFUL COVER: MADE BY THE OH SO FAB KELLIE DENNIS!! 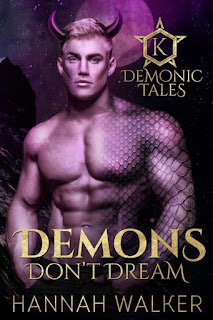 BEAUTIFUL RIGHT? WAIT TILL YOU READ THE BOOK, AHHH AMAZING!! NOW FOR THE BLURB AND AFTER THAT THE EXCITING NEWS ABOUT RELEASE DAY!! :)


Being the Terran ambassador assigned to Kenistal, the Demon home world, is not a particularly easy posting. Caris Dealyn wants nothing more than to get this assignment done so he can continue searching for his missing Avanti friends. But first, he needs to solve the mystery surrounding the last ambassador’s disappearance, while navigating the Demon court with all its whisperings of plots and betrayals. It's not such a bad job, if he could keep his attention on work and not on the prince who seems to distract him just by being near.
Prince Dasalin Kan’erkit is busy running the kingdom in his father's absence, but not so busy he doesn’t notice the new Ambassador. Caris gets under his skin like no one else before, which is quite a feat considering Dasa’s demonically tough scales.


The attraction between them is undeniable, and when events throw them together, sparks fly. They can't get enough of each other. But there are forces at work that wish to keep them apart. In a fight for their survival, the two must figure out which demonic faction is behind the plot and protect not only themselves, but the people they have both vowed to serve.

HANNAH NEVER CEASES TO AMAZE ME WITH HER IMAGINATION AND THE BRILLIANT WAY SHE TRANSLATES IT ONTO THE PAGE, AND THIS BOOK IS NO DIFFERENT, AND LUCKILY YOU GUYS WILL GET TO READ IT SOON, BECAUSE RELEASE DAY IS THIS MONDAY!! YAYYYYYY!!!

NOW FOR AN EXCERPT: YOU GUYS ARE GONNA LOVE THIS!

at February 20, 2016
Email ThisBlogThis!Share to TwitterShare to FacebookShare to Pinterest