HEY FRIENDS! I AM SO GLAD TO BE A PART OF THE FLYING SOLO, MEN OF LONDON 6 BY SUSAN MAC NICOL RELEASE DAY BOOK BLITZ! I HAVE TONS OF BOOK INFO AND EXTRAS, MY REVIEW, AND EVEN A GIVEAWAY, SO LET'S GET STARTED!

Flight attendant Maxwell Lewis has spent years cultivating a bon vivant image only to find he finally wants something more—and that something more includes the never-does-repeats game designer Gibson Henry.


Maxwell Lewis is proud of the life he’s made. Having turned tragedy into triumph, he’s now a beloved member of a Target Airlines cabin crew with more than his fair share of attention both in the air and on the ground. But lately he’s wanted something more than the occasional hook-up or sometime sex buddy—particularly after meeting game designer and passenger Gibson Henry.

Talented and driven, Gibson has built a company ready to be the next big thing in gaming. Devoted to his work, he takes onetime pleasures where he finds them and never does repeats…which is what he tells handsome, sexy Maxwell Lewis after a little mile-high flight attendance. But a chance encounter in a London club is about to change things forever. Two men, one who’s flown solo and another who’s only ever played alone, are about to find that at some point all games come to end, it’s time to bare your heart and try for love.

HERE IS MY REVIEW OF THIS ONE, YOU WILL FLIP OVER THIS BOOK LIKE I DID! 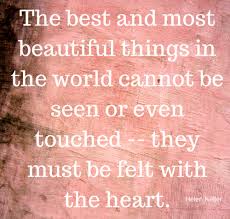 BOY IS THIS QUOTE TRUE, NOW FOR WHAT I THINK ABOUT THIS BOOK! :D

With every Men of London book that comes out I throw my hands up and say "OMG Susan has outdone herself, this is the best of the series!" Well, yeah this time was no different, this book is countless shades of amazing!

Maxwell loves his job as a flight attendant and the meaningless hookups in airports, hotels, and of course punching his mile high club card now and then! Lately it seems that all that is less important and he is restless, and he thinks he just may want someone in his life on a permanent basis, preferably someone who is good with house plants :P!

When he meets Gibson on a flight and then sees him again on a longer one, he just may have found someone who fits the bill, but uh-oh, Gibson doesn't do repeats, and he doesn't mince words when saying so! Maxwell should just forget about him right? Yeah, easier said than done!

When a chance meeting give Gibson cause to look at Maxwell in a different light things change, but given Maxwell's past and Gibson's shaky view of relationships, can they make it work? Or will shadows from the past consume Maxwell and make him pull away?

Man you guys gotta read this book! It is amazing, I am so glad Maxwell got his own book! Thanks Susan, for topping the other amazing books in this series with this one!! 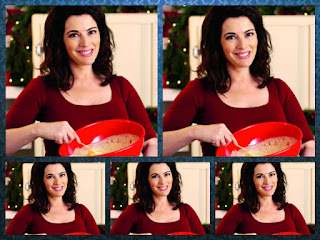 I JUST HAD TO DO THAT RATING IN HONOR OF HOW MUCH MAXWELL LOVES HER, AND HOW MUCH I TEND TO AGREE! BELOW IS A TEASER, LINKS, AND MUCH MUCH MORE, ENJOY GUYS (AND LOOK AT THAT TRAILER) 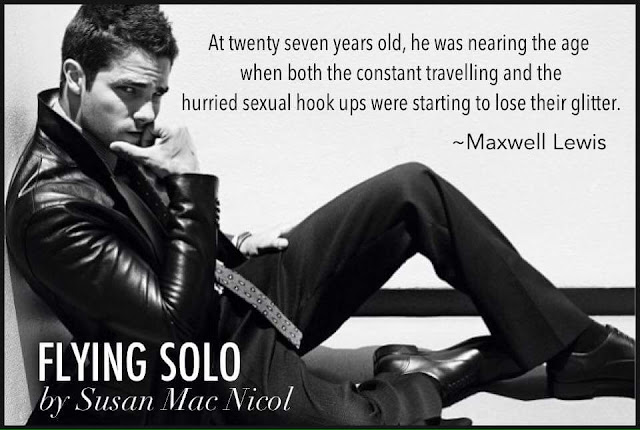 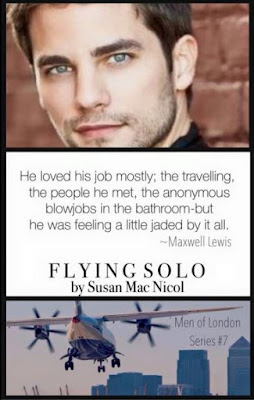 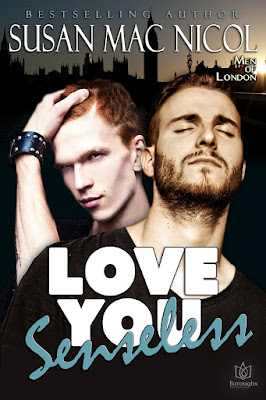 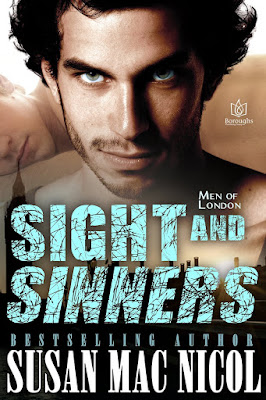 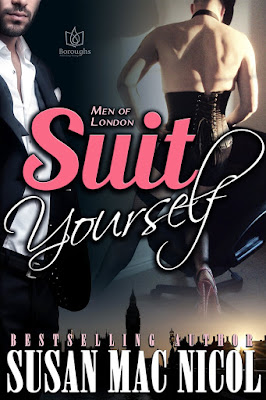 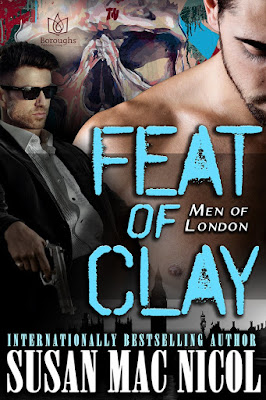 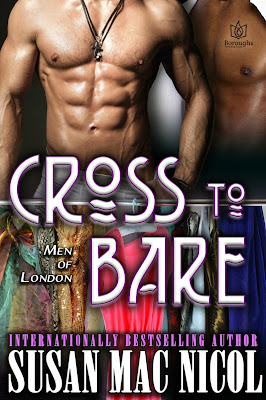 
“You got some time off from flying then?” Gibson cocked his head with a knowing grin, probably having seen the direction of Maxwell’s eyes.

“I have a whole three days off before my next shift. I heard about this place opening, decided to check it out. It’s pretty cool.”

“Yeah, lots of new talent.” Gibson gave a noisy slurp of his drink then peered at Maxwell over his glasses. Maxwell’s stomach clenched in appreciation.

“I don’t normally do this, but do you fancy a repeat? There’s a bathroom on the left we can slip into.”

Maxwell drew in a deep breath. He was so going to regret this, he knew it. He had to take a stand somewhere though in his search for everlasting love.

“Thanks but no. You’re not the kind of guy to get involved, or so you said when you blew me off last time, so it wouldn’t solve any purpose except for a quick bit of pleasure. I wasn’t really in the mood for this tonight but I promised a friend.” He drank up what was left of his cocktail and put the empty glass on the bar.

Gibson looked shame faced. “Yeah, about that. I’m sorry. I shouldn’t have been such a git. I wanted to apologise to you on the plane afterwards but then things ran away with me and I got distracted.”

Maxwell was heartened by the apology. That took balls. “No problem. I understand. I’m at a bit of different path in my life. I’m tired of the fuck’em and suck ‘em. I want someone to come home to. Maybe it’s a stupid pipe dream but I have to start trying to find someone somewhere, right?”

He smiled at Gibson who stared back at him with a strange expression.

I bet he isn’t used to being turned down. Maybe I’m being an idiot.

Maxwell wondered if his new-found principles were worth it. He might have to reconsider.

Someone shoved against Gibson, causing his drink to go flying all over the back of another man standing at the bar. A very big man in a shiny dress suit, flashy jewellery and what looked like a permanent scowl etched on his wide face. He turned around and grabbed Gibson’s wrist, causing him to cry out softly in pain.

“What the fuck? You’ve messed up my suit,” Shiny Suit growled.

Gibson tried to wrench his wrist free. “Hey, you ape, let go of me. I’m sorry, it was an accident. Someone knocked me.”

“Yeah? Fucking twinks. You think all you have to do is bat your girly eyelashes and a man will forgive you anything. I ought to-”

“Let him the fuck go,” Maxwell said evenly. His blood was heating up like lava in Pompeii at seeing Gibson being manhandled. His temper was slow to burn but when it did – oh boy. Maxwell was quick to go from slow denotation to supernova I’m going to fuck you up so badly status. He controlled it – mostly. When he’d been on the streets, it had taken all his self-control not to become an animal like some of his friends had. And sometimes an animal had been what you needed to be to get by.

“What did you say to me?” Shiny Suit’s lips twisted. “Punk, you think you can take me on?” He let go of Gibson’s wrist, who stood rubbing it with a worried expression.

“Max, leave him. He’s not worth it. He’s a douche bag in a suit. Let’s get out of here-” Gibson’s voice was cut off as the other man reached out and slapped him on the cheek, the flat sound echoing in Maxwell’s ears like the knell of doom. Behind the bar, Dan motioned to the bouncers across the room to come over.

The rushing blood in Maxwell’s ears grew to rock concert crescendo and he moved forward in front of Shiny Suit, standing between him and Gibson. At the sight of a red handprint on Gibson’s fair skin, and the look of shock on his face, Maxwell now wanted to hit someone. He took a deep, centred breath to calm himself down. The last thing he wanted to do was scare Gibson away.

“I might look all soft and cuddly,” Maxwell murmured, “but beneath this gorgeous and drool worthy exterior lies the heart and soul of a primal beast.”

Shiny Suit’s eyes widened in confusion and Maxwell thanked the Gods he seemed to have a dumb one here. Brawn and no brains were always so much easier to bring down. Years of fighting his own battles against bullies at school, hanging out with street gangs and learning to fight dirty had often proven his salvation at times like these.


And there was one way he’d found to distract a bully and calm himself down that was almost fool proof.

Susan Mac Nicol is a self-confessed bookaholic, an avid watcher of videos of sexy pole dancing men, geek and nerd and in love with her Smartphone. She is never happier than when sitting scribbling down words and making two men fall in love.


In an ideal world, Susan Mac Nicol would be Queen of England and banish all the bad people to the Never Never Lands of Wherever -Who Cares. As that’s never going to happen, she contents herself with writing her HEA stories and pretending, that just for a little while, good things happen to good people.

Sue is a member of Romance Writers of America and Romantic Novelists Association in the UK. She lives in the quaint village of Bocking in Essex, set in the countryside and not far from the sea should she get the yen to eat crab or oysters on the Cromer Pier. 
THANKS FOR JOINING ME FOR MY RELEASE DAY BLITZ AND REVIEW OF FLYING SOLO! YOU GUYS WILL LOVE THIS BOOK AS MUCH AS I DO!! SEE YOU NEXT TIME!