HEY GUYS, I AM HERE WITH A PROMO POST OF A BOOK I AM VERY EXCITED ABOUT! (I MAY OR MAY NOT HAVE BEGGED TO REVIEW IT, I'LL NEVER TELL :p) WINTER ORANGES BY MARIE SEXTON SOUNDS JUST WONDERFUL, AND IT RELEASES ON NOV. 30TH! I WILL BE BACK ON RELEASE DAY WITH MY REVIEW, BUT NOW I HAVE THE BLURB BREATHTAKING COVER, AND EVEN AN EXCERPT AND PRE-ORDER LINK: LET'S GET TO IT:

Jason Walker is a child star turned teen heartthrob turned reluctant B-movie regular who’s sick of his failing career. So he gives up Hollywood for northern Idaho, far away from the press, the drama of L.A., and the best friend he’s secretly been in love with for years.

There’s only one problem with his new life: a strange young man only he can see is haunting his guesthouse. Except Benjamin Ward isn’t a ghost. He’s a man caught out of time, trapped since the Civil War in a magical prison where he can only watch the lives of those around him. He’s also sweet, funny, and cute as hell, with an affinity for cheesy ’80s TV shows. And he’s thrilled to finally have someone to talk to.

But Jason quickly discovers that spending all his time with a man nobody else can see or hear isn’t without its problems—especially when the tabloids find him again and make him front-page news. The local sheriff thinks he’s on drugs, and his best friend thinks he’s crazy. But Jason knows he hasn’t lost his mind. Too bad he can’t say the same thing about his heart.

SOUNDS WONDERFUL RIGHT? AHHH I CAN'T STAND IT, WHAT A GENIUS CONCEPT!! HERE IS THE COVER: 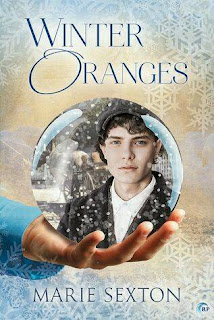 IT IS SO PRETTY! NOW FOR AN EXCERPT, YOU WILL LOVE IT I PROMISE!!

The garage caught his eye again as he pushed himself to his feet. He glanced up at the guesthouse window and froze, his heart bursting into high speed.
Somebody was there!
It was the same person he’d seen the day before, he was certain—a man, although only barely. Jason guessed him to be only a year or two out of his teens. He had a narrow jaw, high, sculpted cheekbones, and thick black hair over shockingly pale skin. Jason expected him to dart out of sight now that he’d been seen, but he didn’t. On the contrary, he seemed utterly delighted. He bounced up and down in glee, waving excitedly.
A deranged fan? Jason didn’t have many these days, but Hollywood was full of alarming tales involving insane stalkers.
“I’m calling the cops!” Jason yelled, shaking his fist ineffectually toward the window.
The man’s lips moved as he spoke, but Jason couldn’t hear him. Not that he was interested in whatever the lunatic had to say anyway. Jason went inside, slamming the door behind him and locking the dead bolt. He called nine-one-one to report an intruder on his property.
“Somebody from the sheriff’s office will arrive right away,” the dispatcher told him.
“Good.” With any luck, it’d be somebody who’d never heard of Jadon Walker Buttermore.
Jason systematically checked every lock on every door, making sure his unwanted guest couldn’t get in. Not that he needed to bother. When he peeked out the window, the man was still right where Jason had left him, staring hopefully down at Jason’s front door. They stood there—Jason watching the boy, the boy watching the house—until a car from the sheriff’s department rolled up the driveway.

I WAS RIGHT HUH? YOU TOTALLY CAN'T WAIT FOR THIS BOOK NOW! WELL HERE IS THE RIPTIDE PUBLISHING PRE-ORDER LINK, ( Here is the great thing, this book is part of Love for the Holidays: A Charity Bundle Benefiting the GLBT National Help Center collection. Check out the collection discount!) YOU CAN ORDER WINTER ORANGES ALONE OR AS PART OF THE COLLECTION! HERE IS THE STAND ALONE PRE-ORDER LINK: (the collection link is above :P)

MAKE SURE YOU TAKE A LOOK, BECAUSE YOU COULD WIN FREE BOOKS FOR A YEAR IF YOU PRE-ORDER!!

THANKS SO MUCH FOR JOINING ME FOR THIS PROMO POST FOR WINTER ORANGES! I CAN'T WAIT TO READ AND REVIEW IT! SEE YOU BACK HERE ON RELEASE DAY!!

at November 24, 2015
Email ThisBlogThis!Share to TwitterShare to FacebookShare to Pinterest