HEY GUYS, HERE IS THE PRE-RELEASE PROMO POST FOR TATE'S TORMENT, AVANTI CHRONICLES 2 BY HANNAH WALKER! I CAN'T WAIT TO GET MY HANDS ON THIS BOOK, BOOK 1 BLEW ME AWAY AND BOOK 2 FOCUSES ON TATE AND MY FAVE CHARACTER, DARIUX SO I AM SUPER EXCITED! BELOW IS THE BLURB, THE BEAUTIFUL COVER REVEALED LAST NIGHT, AND A TEASER THAT WILL MAKE YOU WANT THIS BOOK NOW FOR SURE, LET'S GET STARTED:

When a rare day out goes disastrously wrong, the men have to fight for the survival of one of their own. Their actions spark an appearance by the Conclave, leaving the Avanti's future in the hands of those who choose to destroy them.
Tate will give up everything to save his friends, even if it means losing Dariux and a love he never imagined he would find.
With half the conclave determined to punish the Offworlders, they have to rely on new found friendships. The question is, will it be enough to overcome the trouble that seems determined to take them down?

MAN I HAVE TO HAVE THIS BOOK NOWWWWW! HERE IS THE AWESOME COVER!! 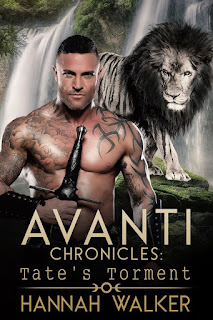 MAN I LOVE LOVE LOVE THAT COVER! NOW FOR THE TEASER! WAIT TILL YOU READ THIS!!! :)


“Tate,” Corin spoke softly, “Think about the way you felt when you first saw him.”
Tate thought back. He had been walking down a corridor, he couldn’t remember what he had been doing or why, but he had literally bumped into this hulk of a man. He had hazel eyes, which seemed to glitter in a myriad of colors. Tate had never seen eyes so expressive. Dariux had high prominent cheekbones and a chiseled jaw. He had firm, plump lips, which were rosy. He was muscular and had a tattoo running up the length of one arm. He was tall, a couple of inches taller than himself and, while muscled, he wasn’t overtly so. Say, six feet, four inches. He had noticed Dariux had soft brown hair, which was naturally wavy and framed his face.
Tate remembered he had been drawn to Dariux immediately. He was fascinated by the tattoo of a refrinti on Dariux’s arm— crouched and ready to pounce. It’s jaws wide in mid roar. Almost immediately, he had been bombarded by images of tracing the curves of the tattoo with his tongue. The man had smelled divine and the assault on Tate’s senses had him in overdrive. He was hard almost instantly. He groaned to himself remembering what a bumbling idiot he had been. He had stammered out an apology for almost knocking the guy over, then had promptly embarrassed himself even further. He blushed at the memories. His exact words had been, “Fuck me, you’re gorgeous.”
Dariux had lifted a brow at him and said, “You must be Tate.”
Tate had nodded, he had been so enamored, and yet Dariux hadn’t seemed to be affected by him. He remembered feeling deeply upset about it and confused at the same time.
Bringing himself back into the present, his gaze found Dariux’s and he let all the hurt he felt shine through. “You weren’t affected by me. You were… I was… I was a bumbling fool, and you didn’t seem to find me interesting at all.” Tate’s brow wrinkled and he curled into himself, not wanting to look at anyone— he simply wanted to nurse his hurt pride. He felt, more than saw, Dariux kneel in front of him.
Dariux cupped Tate’s face with his hand, his thumb brushing tenderly back and forth. “Do you want to know how I remember us meeting? Hear how I felt when I first saw you? How overwhelmed I was?”
Tate simply stared, so uncharacteristically unsure of himself all he could do was nod.
“I remember walking down the corridor. I’d come from a meeting with Niko, Kel, and Tir. I can’t even remember what it was about. The only thing I remember from that day is you. Everything else is a blur. I was so lost in thought, I didn’t see you until we slammed into each other. I remember being annoyed and was about to bite someone’s head off for not looking where they were going. Then there was this man there. He was around six feet of solid muscle. His shoulder length hair was so dark it was almost as black as licorice and his eyes, oh, his eyes, they were simply stunning. Such a vivid blue I could get lost simply looking at them. The whites of his eyes were so brilliant, the blue just drew you in. He had these dimples on his cheeks, damn, those dimples captivated me. I could tell he laughed a lot and I was desperate to see those dimples in full, but all I could see was a hint of them and it was driving me crazy. His jaw was stubbled and I wanted to run my fingers over it, feel it scraping them.


"I was so tongued-tied I couldn’t speak. Then he opened his mouth and I felt my heart stutter. He was apologizing and I knew I should apologize, but I couldn’t find the words. When I finally did, I could have kicked myself. All I said was, ‘You must be Tate.’ Of course, I knew you had to be. I’d already seen Corin. You had me feeling so out of sync, it was all I could manage. You stumbled out another apology and left. I wanted to kick myself for being so stupid.”
YOU CAN'T WAIT EITHER NOW RIGHT? WE WON'T HAVE TO WAIT TOO LONG! YAY! THANKS FOR JOINING ME FOR MY PROMO POST, IF YOU HAVEN'T READ THE FIRST BOOK CHECK OUT MY REVIEW BELOW AND GRAB YOUR COPY TODAY!!

THANKS AGAIN FOR JOINING ME FOR A LOOK AT TATE'S TORMENT, SEE YOU GUYS ON RELEASE DAY!

at November 18, 2015
Email ThisBlogThis!Share to TwitterShare to FacebookShare to Pinterest