HEY GUYS, I AM HERE WITH A RELEASE DAY PROMO POST FOR LOVE IS FOUND; ONLY IF SERIES 1, BY R.PAONE! I LOVE BOOKS ABOUT SELF DISCOVERY BASED ON A TRUE STORY, AND THAT IS JUST WHAT THIS BOOK IS, AND I CAN'T WAIT TO READ IT! I HAVE THE COVER, BLURB, AN EXCERPT AND LINKS TO THE BOOK, SO LET'S GET STARTED:


HERE IS THE COVER: 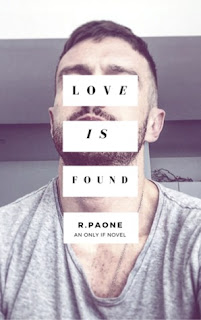 :) NOW FOR THE BLURB, EXCERPT AND BUY LINKS!

I REALLY CAN'T WAIT TO READ THIS ONE, THOUGH I IMAGINE I MIGHT NEED A TISSUE OR TWO! HERE IS THE EXCERPT:


This was the perfect moment, a Kodak one, and I knew it. The blades of grass against my face confirmed it.
He sat down wearing blue jeans and some worn to hell New Balance sneakers. He had on a Mono band tee, one that we always fought about. He loved the Japanese band and I loved the band that sung “Life in Mono.” At least we could say we liked the same group and no one knew which one we would be referring to. He leaned back and rested both of his hands in the grass and stretched out his legs in front of me as I played with the bits of grass poking through my toes. I had taken off my Converse as it was warm enough in August to do so.
Last night confirmed it, also.
I knew that something like a hurricane was brewing between us. It wasn’t the gin rummy round or it wasn’t what he said to me between each unfiltered Lucky Strike he was chain smoking. It was the graze of his touch on me that I had been waiting for. Mitch Faber was the man in my life that evening. Even though he proclaimed to me weeks ago that he was straight, he still admitted he had “feelings” for me. I had a lot of questions about what exactly that meant. At least the rest of the world didn’t question his sexuality. But did I even know?
In the background, Garbage’s “Only Happy When It Rains” was playing. I’m happy now and it’s not even raining.
After dealing a hand for the final round, my eyes became fixated on his movements as he threw down a card. It was fluid to watch those hands snap back forth but also take a drag of each smoke. His light brown, wavy hair kept getting in his eyes and he pushed it back several times with little bursts of frustration.
“What’s wrong?”
“Nothing at all,” he spurted out. I could tell he was way too focused on what hand he was dealing. I was way ahead with points and that probably annoyed him increasingly. His state of distress with a simple card game put me on this undeniable edge. I pulled at my bottom lip. Unbeknownst to him, I was hard as hell and was adjusting myself as he kept pondering his next move.
“You are moving around too much. Now what’s wrong with you?” He said it with such conviction. Goddamn it, he was driving me wild.
We were sitting on the floor of his one bedroom apartment down the street from the graduate campus. I was sitting cross legged as my legs were half under his antique oak coffee table. I made up some pathetic excuse for my leg falling asleep to cover up for the fact I was aroused beyond words.
“I’m uncomfortable. I don’t care what you say. This incredibly tacky rug is doing nothing my ass, dude,” I proclaimed.
It was true- he probably has had this rug since he was in graduate school himself. The red shag texture screamed 2001. I bet he probably had a Grateful Dead poster too above his bed. He shot me a look and brought me back down to reality.
“Well, let’s fix that now before you are numb from the waist down,” he purred.

OH YES, I AM GONNA LOVE THIS BOOK!! HERE ARE THE BUY LINKS SO YOU CAN ENJOY IT TOO!!

THANKS FOR JOINING ME FOR THIS PROMO POST, I CAN'T WAIT TO BRING YOU MY REVIEW OF LOVE IS FOUND VERY SOON!!

at November 16, 2015
Email ThisBlogThis!Share to TwitterShare to FacebookShare to Pinterest