HELLO FRIENDS! IT IS RELEASE DAY FOR K.A. MERIKAN AND THEIR LATEST OFFERING FROM THE THE SEX & MAYHEM SERIES! RED HOT, IS JUST THAT; RED FREAKING HOT!!! I CAN'T WAIT TO TELL YOU ABOUT IT! I HAVE MY REVIEW, LINKS, AND EVEN AN AUTHOR BIO AND LINKS FOR YA, SO LET'S GET STARTED!

AHH THIS IS MOST TRUE FOR RED JACK! HERE IS MY REVIEW:

Red Jack. Rude. Crude. Horny ginger mess. In love with… himself. Loki. Deadbeat. Volatile. Stalker. Terminally ill. Fatally in love. When it comes to men, Red Jack has three rules. The guy has to be hot, out of town, and not up for repeats. It’s a good way to keep the gay flings far away from the eyes of his brothers in the Coffin Nails Motorcycle Club, and he will make damn sure it stays that way. When a hookup takes an ominous turn, and the sexy stranger turns up at his house, the heat is on. Loki invades his life and just won’t leave, wreaking havoc wherever he follows Jack, but getting rid of him becomes harder with every kiss. The world crumbles around Loki when he finds out he has cancer. As if his life wasn’t shit enough already. With only a few months left, he decides to live to the fullest and get every last wish on his bucket list fulfilled. One of those is fucking the hot bearded biker he meets the same night he got the bad news. Big, confident, and dangerous, Red Jack is all Loki ever wanted in a man. After all, he deserves one last shot at love. Who cares if Red Jack is a stubborn, closeted asshole? Loki knows what he wants, and he won’t settle for anything less. Even if it kills him. 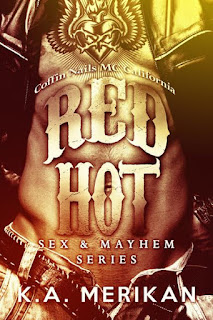 Let me start off by saying, I am so in love with this series, the raw grit and passion of it has me hooked no doubt, to say I was excited about doing release day of Red Hot is a gross understatement! This book lived up to all my expectations and more!

These two guys have off the charts chemistry, even when they are at each others throats! Red Jack is such an endearing asshole ;), and poor Loki, his life is in a tailspin and he thinks the only thing that can make him happy is Jack, live fast, girl a minute straight as a board Jack, ahh but is Jack as straight as he seems?

Jack has always looked out for number 1, namely Jack, so when Loki shows up and sets his sights on him, it is infuriating, but then something happens, and Jack begins to feel things he never has!

These two are there own worst enemies at times, between lies, punches, and oh yeah gunshots, can they get it together in time to see the threat to their future besides Loki's health?

Wow just wow, I want to say sooooo much more, but I don't do spoilers, so you will have to read the book, what I will say is THIS BOOK IS EPIC, and will surprise you at almost every turn! You just must read it! Thanks K.A., for giving us a book we will most assuredly read over and over! 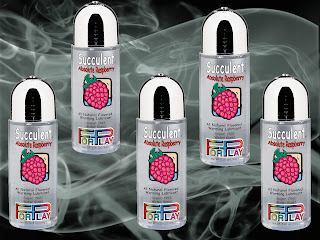 I HAD TO DO THIS RATING OF COURSE, (I COULDN'T FIND WHITE CHOCOLATE RASPBERRY LIKE IN THE BOOK BUT CLOSE ENOUGH ;P), IN HONOR OF A VERY VERY VERY HOT SCENE!! HERE ARE THE LINKS FOR THIS ONE:

NOW FOR A BIO ON THE GALS THAT MAKE UP K.A. MERIKAN, AND SOME SOCIAL LINKS:


K. A. Merikan is the pen name for Kat and Agnes Merikan, a team of writers, who are mistaken for sisters with surprising regularity. Kat’s the mean sergeant and survival specialist of the duo, never hesitating to kick Agnes’s ass when she’s slacking off. Her memory works like an easy-access catalogue, which allows her to keep up with both book details and social media. Also works as the emergency GPS. Agnes is the Merikan nitpicker, usually found busy with formatting and research. Her attention tends to be scattered, and despite pushing thirty, she needs to apply makeup to buy alcohol. Self-proclaimed queen of the roads.


They love the weird and wonderful, stepping out of the box, and bending stereotypes both in life and books. When you pick up a Merikan book, there’s one thing you can be sure of - it will be full of surprises.

I LOVE THIS BIO! KEEP UP THE GREAT WORK LADIES! THANKS FOR JOINING ME FOR MY RELEASE DAY REVIEW OF RED HOT, OMG YOU WILL LOVE THIS BOOK, SO GRAB IT RIGHT NOW!

at July 18, 2015
Email ThisBlogThis!Share to TwitterShare to FacebookShare to Pinterest