HELLO FRIENDS, TODAY WE ARE A STOP ON THE BLOG TOUR OF 'IN DARKEST PERU' BY LOUISE LYONS! WE HAVE AN EXCERPT, REVIEW, RAFFLECOPTER GIVEAWAY, AND BUY AND AUTHOR LINKS: HERE WE GO:


HERE IS MY REVIEW FRIENDS:

In Darkest Peru by: Louise Lyons
reviewed by: Becky


Shy and geeky Rhys White, has recently been ditched by his boyfriend of five years. On top of that he’s been made redundant from his job as a computer programmer.
Tired of being boring and unadventurous, he throws caution to the winds and buys a plane ticket to Peru.
Rhys’ adventure in Peru starts out well, but then disaster strikes. All of his belongings are stolen. Everything is gone—passport, wallet, phone, clothing, the lot.


Stranded in Cuzco, not too far from the famous Machu Picchu, Rhys tries to find someone to help him. He's about to give up, when a sexy Brazilian named Rafael, comes to his rescue… 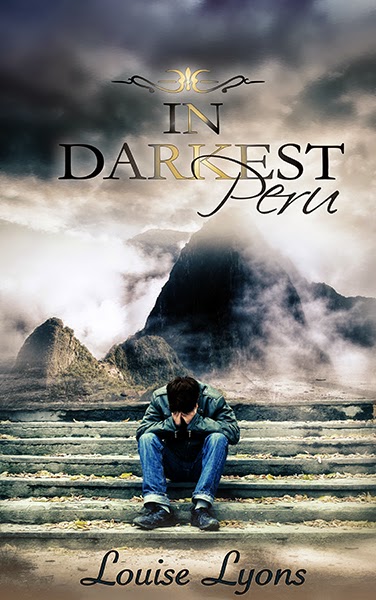 I will start off by saying, I liked the premise of this story, and it was very well written and defined, poor Rhys will capture your heart, and I was so glad that he found Rafael to help him! This is a great story of self discovery, and putting the past behind you and moving on with life and new adventures!

I feel like I must warn you without giving too much away, while this is a great story and I really enjoyed this read, this couple does not live HEA, while they live in each others hearts, they go back to their lives, I only say that because I don't want to you want one thing and get another. This is a wonderful story that is worth the read, just go into it knowing that while he goes back to his life, Rhys is better for having had the time with Rafael, it made him stronger!

I am not spoiling anymore! Great job Louise, I am crossing my fingers for a sequel for these boys!

HERE ARE THE BUY LINKS AND THE EXCERPT FOR THIS ONE :) :

Rhys was tempted to join Rafael in the shower, but he couldn’t make himself move from the bed, as weak as he was from his orgasm. He lay still, catching his breath, with a happy smile on his face. Who would have thought the initial disaster his trip had been would turn out like this?
Rafael emerged from the bathroom a few minutes later, his dark skin glistening with droplets of water which he hadn’t bothered to dry off. Rhys stared unashamedly as a tiny rivulet formed in the middle of Rafael’s chest and traveled quickly down his torso, eventually disappearing into his bush of black pubic hair. Rhys unconsciously licked his lips and Rafael laughed.
“You look like you want me for breakfast.”
“I want a photograph of you,” Rhys blurted. “If that’s okay.”
“So you can remember me? Sure. You want it like this?” Rafael winked and stood still in the middle of the room.
“Hmm…yeah.” Rhys rolled to the side of the bed and picked up Rafael’s phone from the top of the cabinet. He opened the camera function and took three shots of Rafael; one close up of his face and two of his whole body, wet and sexy and beautiful. Rafael dried his hands and took the phone from Rhys.
“My turn.”
“Oh, no, Rafael, I’m not very photogenic,” Rhys protested. He felt his face flush.
“Not very…?” Rafael’s brow wrinkled into a puzzled frown. “You are very hot. I want a picture to remember. You have three.”
“Okay, then. If you insist.” Rhys fiddled with his hair, hoping it wasn’t too messy from sleeping and fucking. Then he arranged himself on one side, his head propped up on his hand. “Go on, then, I’m ready.”
Rafael took a single picture and Rhys reminded himself to email the photos of the Brazilian to himself later. Then he took his turn in the shower while Rafael got dressed.

NOW HERE IS MORE ABOUT THE LOVELY AUTHOR: LOUISE LYONS:

Louise Lyons comes from a family of writers. Her mother has a number of poems published in poetry anthologies, her aunt wrote poems for the Church, and her grandmother sparked her inspiration with tales of fantasy. Louise first ventured into writing short stories at the grand old age of eight, mostly about little girls and ponies. She branched into romance in her teens, and MM romance a few years later, but none of her work saw the light of day until she discovered Fan Fiction in her late twenties.
Posting stories based on some of her favorite movies, provoked a surprisingly positive response from readers. This gave Louise the confidence to submit some of her work to publishers, and made her take her writing “hobby” more seriously.
Louise lives in the UK, about an hour north of London, with a mad Dobermann, and a collection of tropical fish and tarantulas. She works in the insurance industry by day, and spends every spare minute writing. She is a keen horse-rider, and loves to run long distance. Some of her best writing inspiration comes to her, when her feet are pounding the open road. She often races into the house afterward, and grabs pen and paper to make notes.
Louise has always been a bit of a tomboy, and one of her other great loves is cars and motorcycles. Her car and bike are her pride and joy, and she loves to exhibit the car at shows, and take off for long days out on the bike, with no one for company but herself.

WHAT AN AWESOME GIVEAWAY! BE SURE TO CLICK TO ENTER!!!

I WANT TO THANK EYES ON BOOKS FOR LETTING US BE PART OF THIS TOUR! THANKS FOR JOINING US GUYS!!

at March 02, 2015
Email ThisBlogThis!Share to TwitterShare to FacebookShare to Pinterest