COVER REVEAL OF TWO BY TWO

HELLO FRIENDS! I AM SO EXCITED TO BRING YOU THE EXCLUSIVE COVER REVEAL OF SEASON 6 OF THE HIDING BEHIND THE COUCH SERIES, TWO BY TWO BY DEBBIE McGOWAN! DEB IS ONE OF MY FAVES, SO I AM SO GLAD I COULD DO THIS! WE HAVE THE BLURB, LINK, THE COVER (OF COURSE) AND EVEN AN EXCERPT! LET'S GET STARTED:

When Libby takes a stand against her abusive parents, Josh and George readily make her a part of their family. However, her parents may have been involved in something altogether more sinister, and now The Circle must draw together to protect both Libby and her friend Adam.

Meanwhile, two unexpected guests seek sanctuary in Shaunna and Andy's new home, but that's only a part of it, and they soon realise something is very wrong. Someone is watching them...

All this and more in Two By Two: Season Six of Hiding Behind The Couch.

HERE IS THE BEAUTIFUL COVER: I LOVE THIS ONE!! 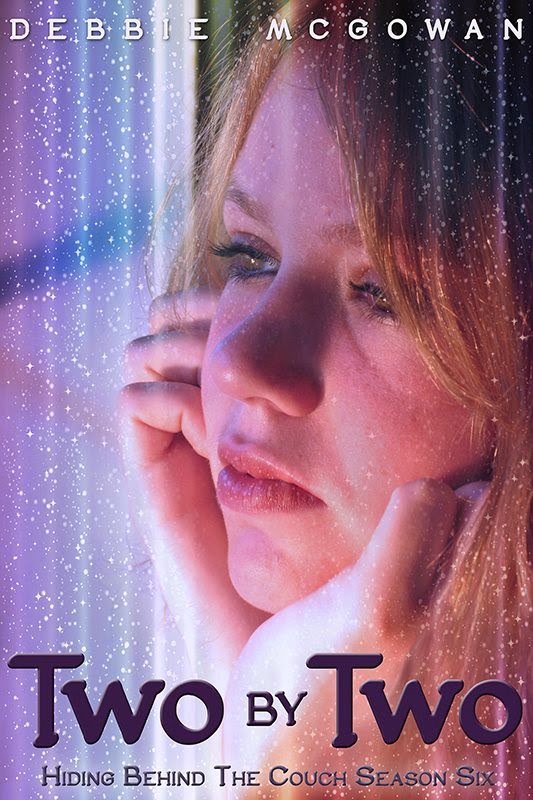 NOW HERE IS THE BEATEN TRACK LINK TO PRE-ORDER THIS GEM! I KNOW YOU ARE BITING YOUR NAILS IF YOU ARE A FAN OF THIS SERIES LIKE I AM!

NOW FOR AN EXCERPT! IT WILL LEAVE YOU WANTING MORE OF THIS BOOK FOR SURE! :)

“But you’re a psychologist.”

“Which means bugger all right now.” Josh lifted his seatbelt so he could turn and talk to George. “Libby needs you.”

“We let her down, but we had no choice. If we stand any chance of helping her now, it’s with you and Shaunna.”

George held Josh’s gaze, searching his eyes, sensing his anxiety. This was a tough decision for him to make, but he was prepared to do it; for Libby. The rear door opened and PC Natasha Granger got in next to George.

“Afternoon,” she offered as a general greeting.

“Thanks for this, Tash,” Farrar said, “I’ll brief you on the way. Just going to drop Josh home first.” He made eye contact with him as he pulled away, making it as clear as he could that his trust was not misplaced. Josh smiled swiftly and returned his attention to the road ahead. It was a dull, rainy day, the lights of oncoming traffic picking out the droplets around the outer edges of the windscreen. Josh used them to keep his mind from straying, hoping that Sean would be home from work. They arrived at the terrace and Natasha moved into the front of the car. George got out for a moment so he could speak to Josh away from everyone else.

“You OK with this?” he asked. Josh sighed.

“Yes, ma moitié, it is. I trust you, and, much as I hate to say so, I trust Farrar.” He put his arms around George and pulled him close so he could speak quietly. “This is nothing to do with the case.”

“He’s doing it for you. That’s why I’m a bit uneasy about it, but anyway, you need to get going. I’ll see you soon.”

“I love you too.” Josh moved away. “Go.” He walked backwards up the path, watching until the car was out of sight.

IF YOU ARE NEW TO THE HIDING BEHIND THE COUCH SERIES (GASP!) HERE ARE THE OTHER BOOKS AND READING ORDER:

This installment follows chronologically from the Christmas novellas A Midnight Clear and Red Hot Christmas.

The series to date:

I HOPE YOU WILL JOIN ME ON THE 31ST OF THIS MONTH FOR MY RELEASE DAY REVIEW! THANKS FOR JOINING ME FOR THIS COVER REVEAL! I AM IN LOVE WITH THIS COVER! SEE YOU SOON FOR RELEASE DAY!