HELLO FRIENDS, I AM HERE WITH MY GIRL GRACE'S  REVIEW OF FALLING DOWN BY ELI EASTON! LET'S TAKE A LOOK AT HER REVIEW AND MORE!

By: Eli Easton
Release Date: December 7, 2016
Length:  252 pages
Reviewed by: Grace
Price:  $4.99
Blurb
Josh finds himself homeless at eighteen, but he has a plan. He’ll head north on the bus to New England and spend October there for his mother’s sake. She always talked about going to see the fall leaves someday. And when the leaves are done and the harsh winter comes, Josh plans to find a place to curl up and let go. It will be a relief to finally stop fighting.Mark spent his life trying to live up to the tough swagger of his older brothers until he pushed himself so far against his nature that he cracked. Now a former Marine, he rents a little cabin in the White Mountains of New Hampshire where he can lick his wounds and figure out what to do with the rest of his life. One thing was clear: Mark was nobody’s hero. Fate intervenes when Josh sets up camp under a covered bridge near Mark’s cabin. Mark recognizes the dead look in the young stranger’s eyes, and he feels compelled to do something about it. When Mark offers Josh a job, he never expects that he’ll be the one to fall. The snow is coming soon. Can Mark convince Josh that the two of them can build a life together before the flurries begin? Trigger Warning: Suicidal thoughts
QUOTE

Review:
This book definitely took me on an emotional roller coaster ride.  The evolution of their relationship showcases the differences in Mark and Josh but even more it highlights their commonalities.  Both of them are dealing with loss and are struggling with the aftermath.
I knew this was going to be a very emotionally charged story but the author created characters that made me feel so much more than expected.   I fell in love with both Mark and Josh and cheered for them, while I cried, as they learned to rely on each other and move through the changes in their lives.
Josh has had a very hard life for one so young.  Dealing with homelessness, the loss of his mother and his certainty that life isn’t worth living.  He grabbed my heart and squeezed it tight.  Mark reminds me of so many of the people I know, with his need to over compensate for what he was taught were inadequacies rather than being shown how truly strong he is and always has been.  Mark finds out the hard way coming out to his family isn’t the worst case scenario when Josh disappears into a snowstorm.  And Josh finds his will to live and need to love, just when his body is ready to give up.
There is no doubt this is a heart-wrenching book, and it is also a wonderful story of resilience and life affirming love.  I encourage everyone to read this book and enjoy the fought for and hard won HEA.  Just keep the tissues close by.

SOUNDS GREAT RIGHT? BELOW IS A BIO FOR ELI!

Having been, at various times, and under different names, a minister’s daughter, a computer programmer, the author of metaphysical thrillers, an organic farmer and a profound sleeper, Eli is happily embarking on yet another incarnation as a m/m romance author.As an avid reader of such, she is tinkled pink when an author manages to combine literary merit, vast stores of humor, melting hotness and eye-dabbing sweetness into one story. She promises to strive to achieve most of that most of the time. She currently lives on a farm in Pennsylvania with her husband, three bulldogs, three cows and six chickens. All of them (except for the husband) are female, hence explaining the naked men that have taken up residence in her latest writing.Eli currently publishes with Dreamspinner Press and has a few self-pubbed titles as well.She also publishes thrillers under Jane Jensen.

THANKS FOR JOINING ME FOR THIS BLOG TOUR STOP GUYS, AND THANKS GRACE FOR ANOTHER TERRIFIC REVIEW! SEE YOU GUYS NEXT TIME! 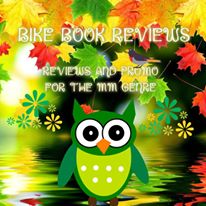