COUNTDOWN TO THE HOLIDAYS DAY 2: THE BEARY BEST HOLIDAY PARTY EVER REVIEW!!

HEY GUYS, IT IS DAY 2 OF OUR COUNTDOWN TO THE HOLIDAYS BOOK REVIEW EVENT AND TODAY IT IS MY BUDDY GRACE'S TURN! BELOW IS HER REVIEW OF THE BEARY BEST HOLIDAY PARTY EVER BY BG THOMAS ALONG WITH AN EXCERPT AND BUY LINKS, LET'S GET TO IT!


The Beary Best Holiday Party Ever: 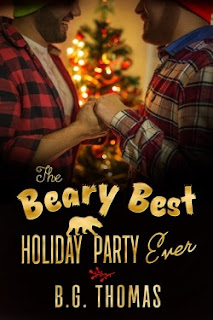 By: B.G. Thomas
Release Date: December 1, 2015
Length: 76 pages
Reviewed by: Grace
Price: $3.99
Blurb
Before he discovered the Heartland Bear Clan, Ron Corbin figured no one could ever love a “fatass” like him. But the big group of big men accepts him, and likes him just the way he is. Having finally found a place he belongs, he works hard to get elected president of the club—and wins. He’s the happiest he’s ever been.

But Paddy Brennan, a sexy bear cub who blew into town and became Mr. Popular overnight, is elected vice-president. Ron doesn’t think Paddy has earned the honor, and now he’ll have to work shoulder to shoulder (and belly to belly) with the guy for a year.

Ron will do what’s best for the club even if that means setting his personal feeling—that Paddy is a jerk—aside. But then as the two men get to know each other, Ron reluctantly finds he not only likes the guy, but is growing more and more attracted to him.

Deep down, Ron still worries he isn’t good enough, but maybe Paddy can show him there’s a beary happy ending waiting for them after all. 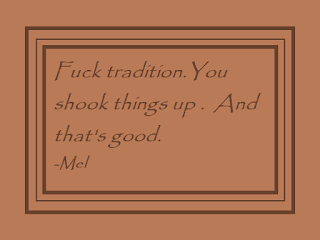 This quote is not just for the hard work and planning for the party but for Ron working to get rid of past hurts holding him back from accepting Paddy’s affection.

Ron has been big all his life and has been ridiculed for it. Kids, peers, boyfriends, even his own parents have always been ashamed of his size. So when he finds the Heartland Bear Clan, a group of big men who appreciate him exactly as he is, he decides to do everything he can to support them, including running for president of the club when their leader of a decade decides it’s time to retire. The only drawback to his perfect plan is Paddy Brennan.

Paddy tripped into the club, became the golden boy and rang all of Ron’s bells. Too bad he’s such a jerk. Unfortunately for Ron, Paddy is elected vice-president and they must work together to make this year’s holiday party the ‘beary’ best. As he works with Paddy, he realizes that the jerk from their first night doesn’t really mesh with the great guy with the awesome ideas he sees now.
For his part, Paddy is diligent in his efforts to make Ron see him as a possible partner. He brings exuberance to their plans and promotes all of Ron’s efforts as well. When they finally really discuss what has caused the issue between them, Paddy has to work to reassure Ron he didn’t really hear what he thought he did.

While this is a fun tale about awesomely sweet, and hot, bears, my heart goes out to Ron as he battles the voices of his parents, and others, who have put him down for his weight. The thoughtless and spiteful words thrown at him all of his life continue to haunt him. With his club and Paddy’s help, he slowly lessens their hold but they won’t ever go away. This story reminds us bullying doesn’t always happen at school or on a playground and words can, and do, hurt. 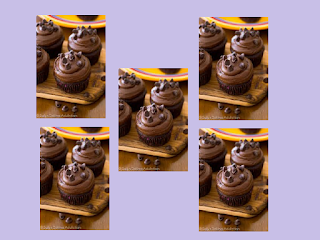 A 5 Death by Chocolate Cupcake Rating!

GREAT REVIEW GRACE! THAT LAST PARAGRAPH IS AMAZING! IF YOU DON'T HAVE THIS BOOK, GRAB IT BELOW!!

JULY:
WHEN RON Corbin heard his name announced as the new president of the Heartland Bear Clan, he could hardly contain himself. He bellowed a loud, “Yowza,” which made everyone laugh. It was only by the grace of God that he kept himself from whooping out, “I’m king of the world.” After all, hadn’t nearly everyone thought it a very egotistical thing for James Cameron to shout when he won his Oscar for best director?
Ron had never understood that. It seemed like a logical thing for the Titanic filmmaker to shout. Perfect, actually. The Leonardo DiCaprio line was one of the most famous from the movie. And it was how Cameron must have felt when he won the Academy Award.
It was certainly how Ron felt when Mel Gunter, the man who had run the club for well over a decade, stood up in front of everyone and declared him as his successor. Ron really did feel like the king of the world. Or at least his world—and his world was the Kansas City bear club.
There was nothing more important to Ron than the Heartland Bear Clan. In many ways the social group had saved his life—at least he felt that way. He’d been one big old depressed bear when he’d been introduced to the group of men. In fact, once upon a time he’d hated the fact that anyone thought of him as a bear in the first place. Bears were fat. And fat was bad, right? Men who couldn’t stop eating, right? Who couldn’t stick to a diet? Who refused to take care of themselves? Who had no self-pride?
That’s what he’d thought. What he’d been told over and over and over again.
“I do not know how you can be a child of mine!” came the voice of his mother.
“Fat! You’re a fatass!” came the voice of his father. “My son—my son—a fatass!”
But the Heartland Bear Clan had changed all of that. Had changed his life. Okay, so he was a bear. Yeah, he was a bit chunky. But not ugly. He’d worked quite a bit to find his style, as well. He kept his brown hair almost military short and his full beard trimmed fairly tight. Yeah, a bear. And a pretty good-looking one. And now, as president of the club he’d devoted so much of his time to, he couldn’t be happier.
Until he found out who was going be his vice president.

THIS LOOKS LIKE AN AMAZING BOOK RIGHT? WELL GRAB IT UP IF YOU DON'T HAVE IT GUYS! THANKS FOR JOINING US FOR DAY 2 AND THANKS GRACE, FOR A GREAT REVIEW! SEE YOU GUYS TOMORROW!