CHECKING IN: CHECKING HIM OUT 3; BY DEBBIE McGOWAN!!

HEY GUYS, I HAVE AN EXCLUSIVE COVER REVEAL FOR YOU, AND BOY AM I EXCITED ABOUT IT! EVERYONE KNOWS I LOVE DEBBIE McGOWAN, AND HER CHECKING HIM OUT SERIES IS ONE OF MY FAVORITES, SO TO GET TO REVEAL THE COVER OF CHECKING IN; BOOK 3 OF THIS SERIES, OUT DECEMBER 15th, IS AWESOME BEYOND BELIEF!! I HAVE THE BEAUTIFUL COVER, BLURB AND EVEN AN EXCERPT THAT WILL MAKE YOU SEE WHY I LOVE SOL SO MUCH!! ENJOY GUYS!! 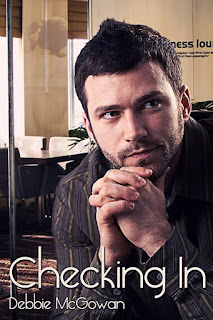 Freelance engineer Sol Brooks is in hot demand. He’s landed a couple of big contracts and is all set for a business trip back to the other side of the pond. The last thing he needs is an unexpected visitor to complicate his departure. Especially when that visitor puts his relationship with husband Adam on rocky ground. Determined to fulfil his contractual obligations, Sol goes ahead with the trip. It’s a great opportunity and a chance to catch up with old friends. And he’s going to check in regularly. What could possibly go wrong?

WHAT COULD GO WRONG INDEED! I CAN'T WAIT FOR THIS ONE, I HAVE AN EXCERPT FOR YOU THAT WILL MAKE YOU WANT IT TOO: BUT FIRST HERE ARE THE PRE- ORDER LINKS: RESERVE YOUR COPY TODAY!!

( THE BEATEN TRACK LINK WILL HAVE SEVERAL PRE-ORDER OPTIONS, SO CHECK IT OUT!) HERE IS THE EXCERPT:

Picture this.
A late Monday afternoon, and I was in the kitchen, whipping up a massive stir-fry—and wearing a floral apron, for God’s sake—rock music pumping full blast from my home office, while I danced around like no one could see me. Because, stupidly, I figured no one could see me. I was home alone. Adam wasn’t due back for another half hour, the others a good hour after that.
A knock.
Not on the door. On the window. I dropped the spatula in surprise, and into the oyster sauce, splattering it up the wall and down myself—lucky I had the apron, huh? Or not.
It had been thirteen years since I’d moved to the States, but sometimes, when I looked in the mirror, I saw the ghost of young me: Sol Brooks, aged twenty, English boy in Philadelphia, chasing after the American dream.
Or, more accurately, running away from the nightmare.
But it was all done, in the past. I was a very different person—older, perhaps a little wiser, certainly stockier, with a few wrinkles, and they were from laughing—life was good. Hell, life was great. I’d married the ‘love of my new life’, and we’d come home to England, to live in this crazy big old farmhouse, with chooks, and a German shepherd dog called Suky, and student roomies: Adam’s younger brother, Noah, and his boyfriend Matty, both of whom, coincidentally, were the same age I’d been thirteen years ago.
It was mostly a happy house, noisy, fun and full of life, other than in the daytimes, when it was just me, working from home, or, like I was that afternoon, preparing to feed the troops, and wearing a sunflower-print pinny left behind by my mother-in-law.
Not just a pinny. I mean, that’s just a bit too kinky for my liking, although if Adam asked…
But anyway, it was to protect my work clothes. Yeah, yeah, I was at home, I know. Once an engineer, always an engineer, and I couldn’t work unless I was in my smart yet casual, open-necked shirt and slacks.
And a pinny.
Any other time I’d have been looking totally cool and awesomely professional—Sol Brooks, freelance design engineer, BEng, CEng and almost MSc. Office chairs? They were a thing of the past. Sounds arrogant to say so, but I was in demand, because sometimes being openly gay opened doors.
Like, for instance, the conversation I’d overheard the week before, while waiting to be invited into the boardroom of a big old-fashioned car manufacturer trying—and succeeding on some fronts—to drag itself into the twenty-first century.
“So this geezer, Solomon Brooks? Any good?” says the MD, staring right at me through the open blind, like I couldn’t see or hear him.
“Yeah,” says his two-I-C. “One of the best.”
I nodded and grinned to myself. Damn right I’m one of the best.
“He’s not really a…you know…” says the Big Cheese.
“A what, Mike?”
“You know what I’m talking about, Alan. I’ve got nothing against them, but—”
“Yeah, but Mike, you can’t deny they’ve got an eye for design.”
OK, maybe not quite what I’d call acceptance, but, hey! I was self-employed, and I did have an eye for design, though I doubt it was determined by my being, you know—one of them. Bloody hilarious really, how that kind of heterosexism was still alive and kicking and so utterly self-effacing. Regardless, it’s all about the money, so I took the commission. It was, as they call it in the South of England, ‘a nice little earner’—sketch up the basic designs for the interior of a prototype electric sports car, zoom around the countryside for a few hundred miles, adjust dimensions, get a few thousand quid deposited in the bank.
“Make it sexy, safe and, if you can pull it off, Sol—” MD Mike held out his hands, cupped, like he was carrying a pair of footballs “—comfy as a big cushioned armchair. That’d go down a treat.”
“Sure thing, Mike,” I more than likely replied. I don’t recall, to be honest, thrown even further off-track by Mike’s grunted afterthought.
“And when I say sexy, I’m after nice soft curves, you know I mean?”
I knew what he meant.
He gave those air boobs a good tight squeeze, jutted out his jaw and laughed like—what were they called? Beavis and Butthead?
“Ugh-huh-huh. Ugh-huh-huh.”
Yep. Like that. What a premium plonker.
So anyway, that’s what I’d been working on that afternoon, in between making a stir-fry of epic proportions and racing Noah’s radio-controlled 1:16 Enzo around the kitchen floor, with Suky in hot pursuit.
It was inevitable really. Knock on the window, jump out of lightly scalded skin, squint at unknown visitor, slowly realise who unknown visitor is, deep breath, step off, stand on 1:16 Enzo, zip halfway across the room, land flat on back, hit head on table, legs in the air, pinny over face.
Thirteen years, and there he was: Calvin ‘tie me up in freedom flags and throw me to the bears’ Hall.
At my window.

AWWW MY POOR SOL (CHUCKLES) SEE WHY I LOVE HIM SO MUCH? YOU JUST GOTTA READ THIS ONE, PRE-ORDER NOW GUYS, YOU WILL BE GLAD YOU DID!

IF YOU DON'T HAVE THE FIRST TWO BOOKS IN THE SERIES AND THE CHRISTMAS BOOK, YOU HAVE PLENTY OF TIME TO READ THEM BEFORE DEC. 15TH ;P HERE ARE THE AMAZON LINKS:

GRAB EM UP GUYS, THIS IS ONE OF THE BEST SERIES EVER!!! THANKS SO MUCH FOR JOINING ME FOR THIS EXCLUSIVE COVER REVEAL, I AM SO EXCITED FOR THIS ONE! SEE YOU BACK HERE ON RELEASE DAY!!

at October 23, 2015
Email ThisBlogThis!Share to TwitterShare to FacebookShare to Pinterest