HEY THERE FRIENDS, I HAVE A TREAT FOR YOU TODAY, HERE IS MY BLOG TOUR STOP OF UN-DENIABLE, BOOK 3 IN THE LEFT AT THE CROSSROADS SERIES, AND THIS ONE IS BY LISA WORRALL! I HAVE A GUEST REVIEWER FOR THIS ONE, MARINIEVES TELLS US ABOUT THIS BOOK AND WHAT A FINE JOB SHE DOES TOO! IN ADDITION I HAVE AN EXCERPT, LINKS, AUTHOR BIO AND  SOCIAL LINKS, A GIVEAWAY, AND TOUR DATES FOR YA! ENJOY FRIENDS: 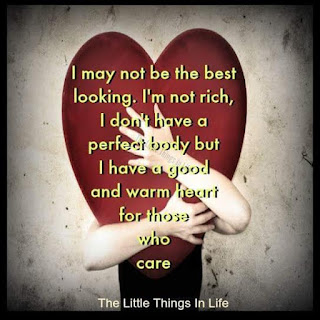 MARI PICK THE PERFECT QUOTE FOR THIS ONE! HERE IS HER REVIEW:

Un-Deniable (Left At The Crossroads 3) by: Lisa Worrall
reviewed by: Marinieves

Little Mowbury is a sleepy English village deep in the Cotswolds. The kind of village where you’re only a local if your lineage can be traced back to the dinosaurs. Where you can find everything in the single village shop from morning newspapers to dry-cleaning, and getting your shoes mended. And, of course, where everybody knows everybody else’s business. It’s easy to find… you can’t miss it… just ask anyone and they’ll tell you… “It’s left at the crossroads.”

Oliver Bradford has had enough of the hustle and bustle of the A&E department in a big city hospital. Not to mention the tension caused by the break-up of his three year relationship with one of the hospital’s top surgeons. When his sister urges him to apply for the position of GP in the quiet village of Little Mowbury, he wonders if this might be just the fresh start he needs. Unfortunately, hitting the post-mistresses’ dog with his car isn’t the best introduction to his patients.

A solitary soul, Deano Wells grew up in Little Mowbury and has been having lunch at the Thatcher’s Arms on a Thursday for the last thirty-five years. First with his father, who brought him to the pub at the tender age of ten after a hard morning in the fields, and then by himself after his father passed on. He runs the farm with a practised hand and minds his business mostly, but that doesn’t stop Oliver from being drawn to the big, quiet man and he knows the feeling is mutual, so why does Deano keep pushing him away? 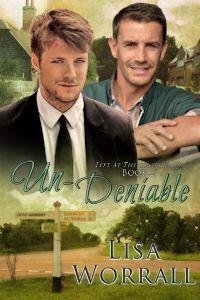 Un - Deniable is book number 3 of the Left at the Crossroads series and what a great book.

Oliver is a doctor trying to change his way and pace of living.  Looking for something different,  he ends up in Little Mowbury. But his getting there starts with difficulty .

Deano is one of the town farmers and he is a really good guy . He catches Oliver ' s eyes while trying to help Oliver out of the trouble he got himself into.

Oliver and Deano have another accidental encounter when Oliver needs to get immediately to Deano's farm.

The way they keep getting together is funny. But something serious they can't control is the attraction to each other.

When they finally get together as a couple things almost don't come to fruition because this time Oliver is the one who has to rescue Deano .... and sometimes even though you are doing your best  .... life can get in the way.

I really love this book. Well developed characters,  old friends and family can be found here. 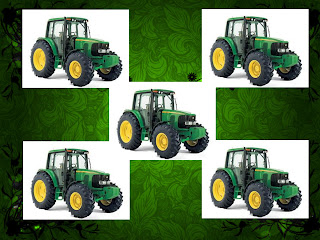 I LOVE HOW MARI DID THE TRACTOR RATING, AND HER REVIEW IS PERFECT, HOW ABOUT AN EXCERPT FOLLOWED BY BUY LINKS?

Oliver stared at the map. Why he had no idea. The next stage of his journey hadn’t
leapt out at him in the last twenty-five minutes so what did he think… the
power of his frustrated gaze was going to burn the route onto his retinas if he
glared at it long enough? He tossed the map onto the passenger seat of the BMW
and buried his fingers in his hair, gripping tightly in his annoyance.


The irritating monotone voice on the GPS unit had suddenly sounded as though she’d
drained an entire bottle of JD, with her words slurring into one another before
she faded out completely. That had been ten miles back, and he’d managed to
lose himself twice since his chatty companion had left him to fend for himself.
Of course, he’d tried to coax her back with promises and gentle soothing and,
when that hadn’t worked, had repeatedly pressed every single button he could
find then whacked the screen with his fist. None of which had convinced her to
start talking again. That’s when he’d remembered the map he’d purchased on a
whim at the garage he’d stopped to fill up at earlier. The same map he’d just
screwed up into a useless ball and thrown down beside him.Where the chuff is this place? It’s like bloody Brigadoon!
Oliver opened the door, climbed out of the car and shielded his eyes against the sun
with his hand. He couldn’t deny it was beautiful countryside, or that it was
indeed in the middle of nowhere. That combination had been the main reasons
he’d found the job opening so attractive. Oliver leaned against the car,
crossed his arms and filled his lungs with fresh country air. He could hear
Becky’s voice now as she’d burst into his flat, waving the Haymarket magazine at
him.
He would be the first to admit that seeing Andrew at the hospital every day had

begun to suck all the enthusiasm for his job right out of him, and being an
intern in the casualty department wasn’t something you could afford to do
unfocused. It hadn’t taken long for him to decide he needed a complete change.
A change of employment, of pace, of bloody everything.
Becky, his sister, had been very supportive when she’d found out about Andrew’s string
of affairs. Although the support had only come after she’d told him she’d
always thought Andrew was a wanker anyway. He had pointed out that it would
have been quite helpful if she’d given her opinion when he’d started dating
Andrew. Not waited until he’d had his heart plucked from his chest and stomped
on by said wanker.
“Well, I thought I’d grow to like him, didn’t I.” Her response had been less than

apologetic. “And did you?” he’d asked. Becky had simply topped up his glass of Jacob’s Creek and replied, “Good God no. Man’s a tosser.”
Five unbelievably long months later, she’d shoved the Haymarket under his nose and

jabbed an excited finger at the advertisement she’d circled in fuchsia
lipstick. “It’s perfect! Exactly what you need. New job, new house, new people.
Fire up the laptop and let’s send your C.V.”
Oliver gazed around him, the only sounds the gentle thrum of the BMW’s engine and

birdsong from the trees shrouding the country lane. Becky had been deciding the
route his life should take from the moment they were out of nappies—having a
twin was not always a blessing, especially when they knew you better than you
knew yourself. The C.V. had been emailed and before he’d had time to breathe
he’d had two phone interviews and a Skype call with the retiring GP. Now he was
staring at miles of British countryside wondering if Becky had been wrong this
time.
His main priority at the moment, however, was trying to figure out how to get to
where he was going. There was, of course, the possibility he could be stranded
in the arse-end of fuck-alone-knows-where forever. His frantic family would end
up sticking posters of him around London and he’d eventually be found wandering
around a farmer’s field wearing a cabbage leaf hat, up to his neck in sheep
shit.


NOW LET'S LEARN A LITTLE MORE ABOUT LISA, AND DON'T FORGET TO ENTER THE GIVEAWAY!! :)

I live in Southend-on-Sea, a small seaside town just outside London on the South East coast of Essex, England that boasts the longest pier in the world; where I am ordered around by two precocious children and a dog who thinks she's the boss of me. I've been writing seriously for three years now and love giving voice to the characters warring to be heard in my head, and am currently petitioning for more hours in the day, because I never seem to have enough of them.

Elisa - My reviews and Ramblings

A Celebration of Books

THANKS FRIENDS, FOR JOINING ME ON MY BLOG TOUR STOP OF UN-DENIABLE, AND THANKS MARI, FOR ANOTHER FINE REVIEW! SEE YOU GUYS NEXT TIME! :) 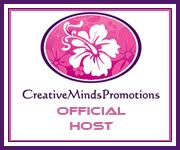